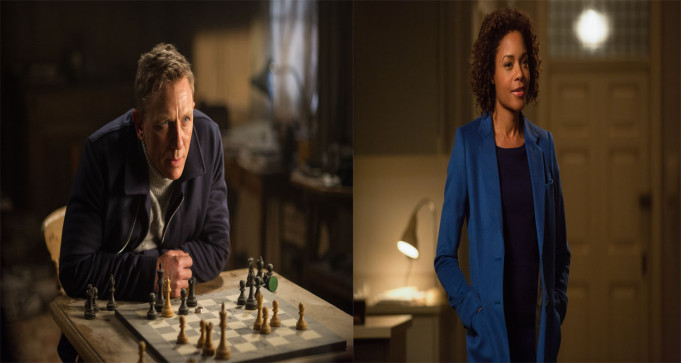 With the release of Spectre on Blu-Ray and DVD on the 22nd of February, Bond himself, Daniel Craig and Miss Moneypenny aka Naomie Harris sat down to have a chat about the film. How do you think the franchise stays relevant?

One of the things that always makes this franchise so exciting and keeps the audience on board and loving it is because it’s reflecting the issues in society. A big theme in the movie is the situ of surveillance and how much we’re being surveilled without us knowing and whether that’s the right thing to do or not and I think that’s a question that we’re all grappling with so it’s great that it’s always reflecting where we’re at.

Tell us about your character, Moneypenny?

She feels more mature and kind of centered in what she’s doing, I think when she had her gun it was really great and she was trying to be a bit of a mini Bond and I think the reality is she doesn’t really have the stomach for killing and being out in the field, I think she’s much happier with providing support within MI6.

What you see at the end of Spectre and why I think people are going to love it is because there are a lot of unanswered questions when you watch Casino Royale, Quantum of Solace, Skyfall and I feel like these jigsaw pieces are all tied up in Spectre and so I do think it feels like a completion of something but yet there’s plenty of room for a new adventure.

Tell us about Daniel Craig as James Bond?

He has provided this Bond unlike any other Bond we’ve ever seen, for me it encapsulates all the other Bond’s that have happened in the past but it adds something new. He’s humanised Bond, he’s made Bond much more relatable to the audience and added a kind of sensitivity to him which you know the box office results speak for themselves, people have loved it. Tell us about continuing the 007 story?

I’ve been incredibly fortunate that the way the past four movies have gone is that we’ve sort of had a through line and it seemed right that we should tie things up. We reintroduce a very old character into this movie and that seems a very appropriate thing to do but there’s no end here, there’s never an end to Bond.

Tell us about the appeal of your character, Bond?

The flaws in his character are the most interesting things to play and not being afraid to show weakness or at least be vulnerable at some point during the movie because otherwise it becomes a two-dimensional character and I want to hold the audience’s attention all the way through from beginning to end.

Tell us about the cast and what their characters are like?

We’ve got some amazing actors in this film and they do wonderful things and for me the most entertaining thing when watching the film is Bond’s interaction with the characters that the other cast play, the consequences of that then becomes a shared experience. I hope the audience is rooting for everybody on the screen.

Tell us about the production team on this film?

We have stupendous crew members, people like Chris Corbould and Gary Powell who spend their days figuring out how genius and how exciting we can make these scenes. I sort of just turn up and say “where do you want me, how do you want me, how can I make this look good”, that for me is one of the biggest joys I get out of doing these films. I get to be it and do it and hang off buildings, it gets the heart going you know.

Tell us your thoughts on the opening sequence?

I know what went into making that scene, I was obviously involved with quite a lot of it, the first time I saw it I was massively proud, I was proud for everybody involved and I felt that if you’re going to start a Bond movie, that’s it, the rest of the movie I love as well don’t get me wrong but it is a great way to kick off a Bond movie.