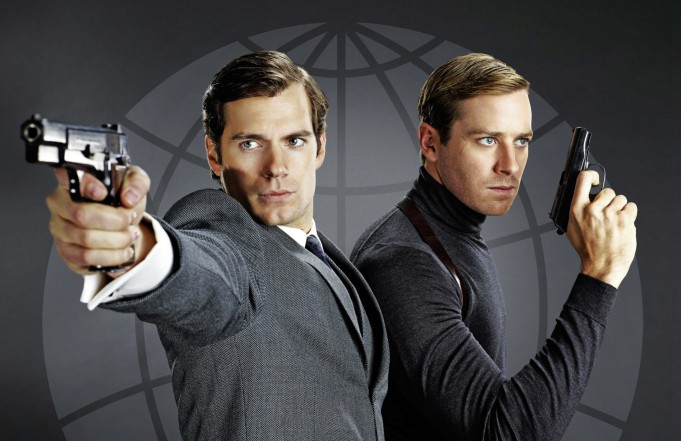 With the release of The Man from U.N.C.L.E. on DIGITAL HD, BLU-RAY and DVD today, Henry Cavill and Armie Hammer sat down to answer a few questions about the film.

QUESTION:  The Man from U.N.C.L.E. is inspired by the ‘60s TV series, which aired before you guys were born.  Even though you’re telling a whole new story, were there any aspects of the original series you wanted to acknowledge or pay homage to?

ARMIE HAMMER:  Yes and no.  I’d say, any time you approach a property that’s been done before and has people who really enjoy it or remember it nostalgically, you want to be careful.  You want to tread lightly because you want to make those people happy.  What we’re doing with this one is aiming to make those people happy, but also packaging it in a way that if you don’t have the past experience of watching it as a kid or anything like that, you can still go to this movie and understand what’s going on and appreciate the characters, whether or not you know who Mr. Waverly [Hugh Grant’s character].

This is a whole new take for people who have seen it and also those who haven’t seen it.  So we were cautious and we were careful, but at the same time, we knew we were doing something new.

QUESTION:  Armie, [co-writer/director/producer] Guy Ritchie has said that he wanted to inject humor into the spy movie genre without tipping over to parody.  How did you balance Illya Kuryakin’s Russian accent within that tone?

ARMIE HAMMER:  I think the thing I was trying to do with the accent was just to sound as authentic as possible.  It’s funny – if you go back and watch American films, especially from the ‘60s, ‘70s and ‘80s, every Russian is sort of like an arch character, but that’s not really how Russians speak.  It’s sort of like the American interpretation:  ‘They were the bad guy there. They should sound bad.’  So that wasn’t what I was aiming for.  I really just wanted the accent to sound as universally Russian as possible.  I was just trying to incorporate whatever vowels and sounds I could pick up and hear from native Russian speakers.

QUESTION:  Did you listen to Russian radio or something to get an idea of the contemporary Russian accent? QUESTION:  Henry, you’re English but playing an American spy.  Can you talk about how you shaped your American accent for this film?

HENRY CAVILL:  I think the hardest thing for me was the accent.  When we started, Guy said, ‘Okay, I want something a bit like Clark Gable, but not Clark Gable.’  And I said, ‘Okay, cool.’  So I sat down with Andrew Jack, our dialect coach, and he ran me through some Clark Gable stuff.  We worked on it.  We kind of got it down, and then we started shooting.

And Guy kept on saying, ‘Okay, no, that word sounds wrong.  Come listen to it.’  I say, ‘Yeah, okay, it sounds weird.  And what’s weird about it?’  He says, ‘It just sounds too English,’ or ‘That one sounds too American.’  So we had to try and finesse it in different ways and eventually, a quarter way through the movie, it became an affected American accent, which was transatlantic and dated.  And that’s why Napoleon sounds the way he sounds now.

QUESTION:  Given that you’re playing people from different countries, which character do you guys feel closest to?

ARMIE HAMMER:  Probably Gaby Teller.  [Laughs]  That’s the fun of acting—you get to play all these different roles that really, in no way, have anything to do with you.  And it sort of gives you liberty to be crazy with your art, so you can be conservative in your life.

HENRY CAVILL:  And, by the nature of playing a character, you do feel close to the character because you always put a little bit of yourself into each character. At least the way they look.  [Laughs]

QUESTION:  The origin stories of Napoleon Solo and Illya Kuryakin are original to this movie.  Can you tell us a little about their backgrounds?

ARMIE HAMMER:  I’ve gone through it day by day.  [Laughs]  Basically, Illya was raised in sort of the heart of Soviet Russia.  His father was in the military, but then did something politically dishonorable and was sent off to the Gulags, like millions of Soviets at the time, so Illya was dealing with the shame of that.  He was also, from what they say in the movie, a sort of physical specimen.  So from a young age, he was chosen and put into government-sponsored schools and training programs where they were breeding him to become the super spy.

That’s why he doesn’t really have any other ambitions, except to be the best spy he can be.  He’s not worried about going home and eating a beautiful plate of risotto with truffles, or trying to line his pockets in the middle of a mission.  He’s just there to do the mission.  I think that’s why there’s such a fun rub between the two of our characters.  They’re even more diametrically opposed. QUESTION:  Speaking of the atmosphere of the Cold War, it’s very different from the contemporary environment.

QUESTION:  What was your frame of reference for this era?

ARMIE HAMMER:  We were alive when the Berlin Wall came down.

HENRY CAVILL:  I remember my brother bringing back a piece of it, in fact.  But even still today, there’s the idea of constant threat.  And the great thing about the ‘60s, and maybe today as well, is that despite this underlying threat at all times, people are still going about their lives and just really enjoying it.

Right now, there’s always the threat of terrorism, non-stop, especially in America, so we can appreciate how it may have felt.  I mean, it’s not quite the same as nuclear apocalypse, but maybe we can be a bit more in tune with it because nuclear apocalypse is something which is really difficult to fathom.  Whereas a bunch of people getting hurt is easier to imagine.

QUESTION:  Did either of you go back and watch The Man from U.N.C.L.E. TV series?

ARMIE HAMMER:  I did watch the original series. I didn’t necessarily do it to learn any parts because David McCallum played the part of Illya Kuryakin, and he did a great job.  But it was a very specific role at a very specific time for a very specific show, which is very different from the movie that we’re making now.

The bones are similar.  The characters are largely the same.  But it’s a very different show than our movie.  So there wasn’t really anything I could pull off of it.  More or less, it was just to give myself the historical context, and understand why we were making this movie. QUESTION:  Guy Ritchie described Illya and Napoleon as “the straight and the loose,” and a lot of their friction comes out of that – people who are such opposites having to work together.

HENRY CAVILL:  I love that.

ARMIE HAMMER:  It’s funny, watching people being put into uncomfortable situations that they don’t know how to deal with.   And that is pretty much Illya’s life outside of spying.

HENRY CAVILL: All the social faculties are just gone for Illya.

QUESTION:  How did you find the balance between playing it straight and having fun with that opposition?

ARMIE HAMMER:  You just had to find the truth in the situation – to be the goofy Russian guy, who’s all thumbs, who doesn’t know how to talk to this person.  It would be very easy for that to get caricaturish, so you have to find the truth in it.  Why can’t he deal with this person?  Why is it that he is socially inept?  What is the cause of that?  And then just play it like it’s not funny.

QUESTION:  Did you watch any spy movies that you found helpful or influential as you were shaping these characters?

ARMIE HAMMER: I don’t know that there was really one movie, per se, that influenced this for me.  I would honestly be hard-pressed to pick my favorite spy movie, to be perfectly honest.  What we were doing was so specific, and tonally what we were doing was so different from anything I’ve ever done, or really anything I’ve ever seen, except for maybe some other work that Guy’s done before.  We really felt we were on a new path and a new trajectory, so we just trusted Guy.

QUESTION:  There’s a lot of action in this movie as well.  The car chase that opens the film has a balletic quality, but when your characters finally meet and fight it out in the bathroom, it’s quite gritty.  How was it for you as actors to handle the physicality of your roles?

HENRY CAVILL:  I think that the real physicality came with Armie.  The fight, despite it looking very rough, was very short.  It didn’t take long to shoot, and it wasn’t very complicated.  It didn’t require much in the way of fitness, either.

HENRY CAVILL:  Yeah, but Armie had to run for three days straight, chasing that bloody car.  [Laughs]  He had to be fit for that.

ARMIE HAMMER:  I’ve had better days.  And I’m not the one who’s that physically fit.  Henry is Superman; he’s sitting in the car, relaxing.  And I’m out there, sweating, running, ‘Oh, Guy, you’ve got the wrong guy for this job.’ [Laughs] QUESTION:  Watching the movie, it looks like all of you had a lot of fun making it.  What was the atmosphere like on-set?

HENRY CAVILL:  It was fantastic.  Most enjoyable movie I’ve worked on.  Most fun.  We all walked away as friends.  We’ll come see each other again, as friends.  It’s hard to say more, really.  It was just relaxed.

ARMIE HAMMER: None of us got a fight … which is rare for a bunch of actors.

QUESTION:  You play a very casual, sophisticated guy, compared to Superman.  What’s it like to have such a change in mindset between characters?

HENRY CAVILL:  It’s the joy of being an actor.  You get to play these different roles, and then see yourself in these sort of imaginary characters.  It’s fun.  I wouldn’t want to play the same character over and over again forever.  You’ve got to mix it up, and break it up. Otherwise it just gets a bit boring.

And as I said, Napoleon is really fun to play. And as much as Superman is a very stoic character, it’s also very cool to be Superman. He’s got superpowers, and he does some pretty wild stuff.  It is fun to switch and change.

QUESTION:  You’ve both have a diverse filmography, but are there any kind of movies that would be an ideal future project for you?

HENRY CAVILL:  Yeah.  And just to have consistent work.  I mean, Armie’s now got a full-fledged family.

HENRY CAVILL:  He’s got school to pay for one day.

ARMIE HAMMER:  Think about that.  [Laughs]  I’m going to go lay down.