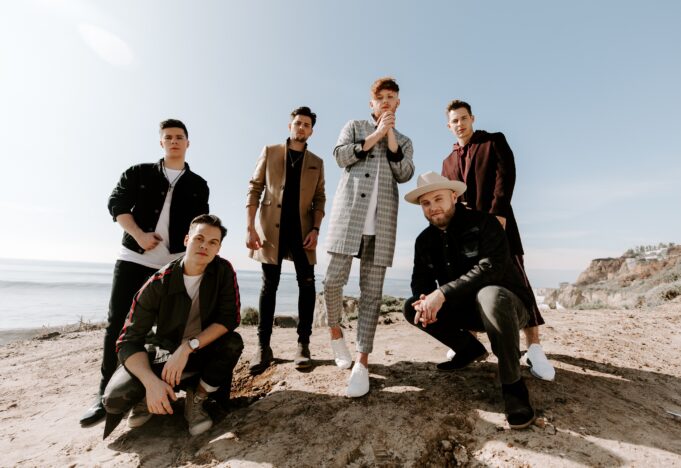 From performing on The Late Late Show with James Corden to appearing on Jimmy Kimmel Live, the band has achieved more than any young artist could dream of.  2019 also saw the band perform their unmissable set at MTV’s Gibraltar Calling 2019 alongside Take That and Rick Astley.

I had a quick chat with the band about their new album ‘Rivers‘.

How did you all first meet?

Jordan – ” Our manager, Robert Deaton, was the one who brought us all together. He’s a TV producer in Nashville and had an idea for a band containing guys who could all sing and all play. Lots of harmonies. He started asking around with his friends in the music business and eventually met all of us through those mutual connections. Chris and I were already living in Nashville, but the rest of the boys came out for a few weeks and we just jammed in a band room to see if we had something. And it worked”.

Tell us about your new album ‘Rivers’?

Jordan – Our new album ‘Rivers’ is a 12-track album that contains songs that deliver a positive message. We like to think it’s anthemic and uplifting. We believe the album has the ability to take each listener on their own separate journey.

What track from the new album do you hope will be a fan favourite?

Austin – I’m really hoping people will latch on to ‘Obvious’ I have a sick bass solo on that one and everyone needs a good bass solo to brighten their day.

Chris –  I’ll own up to this one. I bite my fingernails and lose everything.

You performed on The Late Late Show with James Corden, what was that like?

Jordan – It was absolutely incredible. From the moment we walked in the door, to be on that stage, it was just absolutely amazing. James Corden is a total legend. All the staff and crew were so sweet to us and we really really hope we can go back soon.

Austin – And the green room was fantastic. Cold-brew in the morning and regular brews in the evening.

Do you do anything to get pumped up before you hit the stage?

Austin – We all get in a circle and sing together to warm up.

We know gigs don’t always go as planned, what’s been your most embarrassing on-stage moment?

Chad –  I have several. In my hometown show in Wilmington, Delaware, we all decided to get up on the drum riser and jump off during our cover of ‘Life Is A Highway,’ and when I landed on my slippery boots, I almost fell over. I knocked over Jordan’s guitar and made a complete fool of myself. If you want to see a slo-mo version of it, check out our Instagram. It’s worth your while.

Then another time at an outdoor festival in California, this giant green beetle climbed up my leg and everyone could see it on the big screen. I think the cameraman actually zoomed in and there was definitely some fan footage too. Not the most flattering moment in my life.

What’s next for you guys?

Jordan –  Sleep! We’ve just landed in Germany for C2C Berlin and will be coming over to London next. Later this year we’ll be out on the road with Rascal Flatts for a dozen dates, as well as playing our new album live as much as possible.