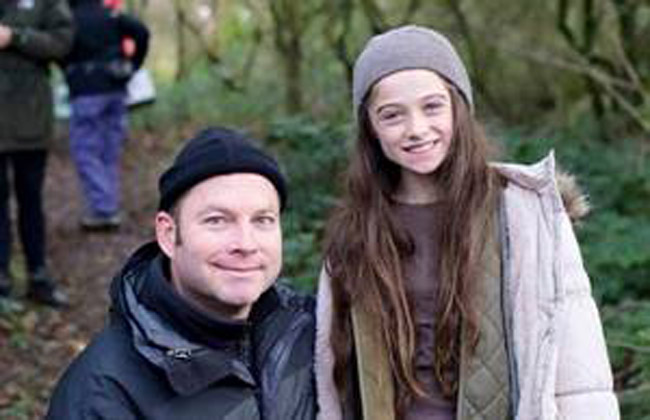 For the release of Molly Moon and the Incredible Book of Hypnotism out in cinemas December 2nd, we spoke with the director Christopher N. Rowley on how he went about adapting the popular children’s book for the big screen. We also spoke about his previous film Bonneville and his upcoming projects.

As the director of Molly Moon and the Incredible Book of Hypnotism what was it, that attracted you to the project?

To me, I always want stories that are underdog stories or ugly duckling stories. So Molly’s character spoke to me. You know, somebody who the world has not been good too but she has a light inside of her and she’s an optimist and won’t let go. So it turns out, you know she fights her way through all of that to the other side.

Adapting source material, especially books, is never an easy thing to do. How you strike a balance between creating a screen version of this story, while also remaining faithful to the book.

We used the story as a blueprint; I worked with Georgia Byng who wrote the book. So that was really helpful when we needed to move away from the story and I had the person who created it right there and I could say, “Look, is it okay if we went in this direction with you?” Because I don’t want her to be off the page with where we might go. So that was very helpful. We used it more as a blueprint as we moved along; we tried to be as loyal as possible. But the tone I think in the books are more goofy, so we tried to tone that down a bit.

Were you a reader as a child, and if so, what were your favourite books as a child?

Yes, I was a reader as a child. I loved Swiss Family Robinson. Being stranded on an island and creating this magic house in the tree was always something that spoke to me. And I started my career as an architect based on those passions, so I would say that was my main favourite book.

As an adult how do you create a movie aimed at a younger audience? Is it difficult to try and figure out what children find entertaining, and presenting it to them on their level without it feeling patronising?

Yeah, that is something we definitely wanted to do and Georgia has kids and I have godchildren and we bounced stuff off of them. That sometimes we thought it was absolutely hysterical and they would (laughs) sort of look at us like we were crazy. So we did use actual kids because, just because we think it’s great doesn’t mean they are, so I hope we accomplished that.

You had your kids as a test audience as you were trying out things for the film.

Yeah, kids seemed to like it. In Toronto, we had some big screenings and at the end of the screening Georgia pulled out the Book of Hypnotism and they all gasp and go, “Look, there it is!” which is sort of cool.

It is certainly a power kid’s can fantasise about having.

Yeah, I think all of them can imagine a million things they would do with hypnotism, to their parents and teachers etc.

You directed Bonneville in 2006, which was two years after your feature directorial debut, The Remembering Movies. Why did you wait 9 years from Bonneville to Molly Moon before directing again? And what have you been doing with yourself in between these projects?

I’ve been writing projects and pitching TV shows and just nothing came up. So we have a few things that are about to kick off which are exciting. But you know it is a long haul when you are creating stuff that is your own and finding your own projects. I have had a lot of support and feel lucky that I can keep doing this because I do love it. I have done it all without agents and managers, that’s probably going to change soon. But you know when you start from scratch – Bonneville was from scratch – it takes a long time.

Why did you prefer to do things without a manager or an agent?

It just happened that way. A writer I knew had this idea for Bonneville and when I graduated from film school he said, “You know if you are interested, let’s do this together”, and it just presented itself that way.

In Bonneville you directed Academy Award Winner Jessica Lang, Kathy Bates of course also won an Academy Award for Misery as well. Molly Moon is filled with a talented cast also, Emily Watson, Dominic Monaghan and so on. But this time you are mainly working with child actors such as Raffey Cassidy and Jadon Morris. What were the biggest differences and biggest challenges you had when it came to directing child actors as opposed to adults?

I love working with kids, there is a lot of unexpected things that happen, especially in Molly Moon with the younger kids. You can work with them as much as you want before the camera rolls but you really don’t know what is going to happen. Raffey Cassidy is a total pro and I basically spoke to her as if I would speak with an adult actor. All of the actors from Celia (Imrie) to Joan (Collins) to Emily (Watson) to Dominic (Monaghan) to Lesley (Manville) who came into contact with her always commented on how connected and present she was. Raffey is magic, she is absolutely fantastic to work with and all of the kids were great. It was a long casting process to try and mix and match all of these kids together. When we started early on just getting them used to each other, they all bonded really quickly and formed their own community that looked after each other and sealed each other in their own performances, which I was really grateful for. But that’s going to happen or it’s not going to happen and I think we were just lucky with this mix and match of kids, they were great.

Did you have a certain picture in your own mind of what type of actor would play Molly Moon?

Actually, Georgia had made some sketches early on and a producer I work with – not on this project but other projects – had also made a suggestion after reading the books. And Raffey and Jadon actually matched almost identically to what everyone envisioned. We found Molly Moon first and then it’s like how do you find a Jadon that is going to work well with her and Jadon and Raffey were great together.

There are 6 books in the Molly Moon series, are there any plans for any more of them to be adapted into films, and if so, would you be interested in returning to direct them?

I would definitely be interested. Georgia, I think, has worked a little bit on a screenplay for the second book. I’m not sure where it is right now but whether for film or television, I certainly hope there is more of Molly Moon coming and I would love to be part of it, and if we could bring Raffey and the orphans along that would be even better.

How do you see the series progressing, would the characters age up similar to the Harry Potter series?

Well in the books they don’t age (laughs), so we have a bit of a problem there; we would have to make an adjustment. Because basically they just happen right after each other and we can’t do that with these films. We just has a screening yesterday and it is the first time I saw most of the orphans together in well over a year and they’ve changed. The little ones are still exactly almost as they were but the older ones are, you know, twice as tall and completely different.

Was that Raffey Cassidy’s natural singing voice in Molly Moon?

It was partially her singing and then we augmented it. But one of the things with Raffey is anything you threw at her she mastered. She had no experience with dance or singing but along the way, when we got to filming those big scenes, we actually had to have her back off. She started getting too good for what Molly Moon was supposed to be, she is a wonderful person to be around and her family also. By the time we wrapped Molly Moon it was a really teary day for the entire crew, which says a lot for Raffey and the crew.

Now that you have finished Molly Moon, have you got any upcoming projects? And if you had the power to cast anybody, what would be your dream team of actors to recruit for your next movie?

There are several projects; there is a psychological horror film that we are in the process of writing. There is a Broadway musical that I am extremely excited about that I am writing and several television series. Everyone and anyone from Molly Moon would be great to bring on board if it were appropriate for those people. I would love to find the right movie for Raffey.