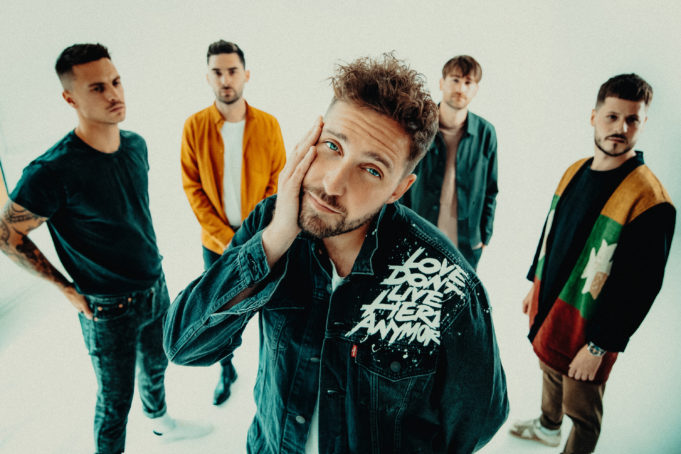 With the release of new single ‘What’s It Like’, You Me At Six rocked the main stage on Friday at Reading Festival 2019.

Performing at Reading Festival ahead of their biggest outdoor UK headline performance to date at Gunnersville, You Me At Six rocked the main stage at Reading Festival 2019. You can expect a very special and one night only set comprised of 27 consecutive singles, charting the band’s rise from Take Off Your Colours to VI and now into bold new territory with ‘What’s It Like’.

I caught up with Dan, Matt and Chris backstage to find out what inspired their new single, pre-show rituals and most embarrassing on-stage moments.

Tell me about your new single ‘What’s It Like?

D- It was rather a different song when it first started out. It excited everyone, we turned it into a ‘You Me At Six’ song, It’s kinda cool because it’s a talking point for whoever has heard it so far. It’s not just something that you’d imagine we would come out with, there’s a bit of a shock factor. It’s been really entertaining to see if people love it or even if people are not liking it. We’d rather people have an opinion on something than just be like “yeah that was alright”.  I think it’s really good to have that marmite feeling

M- just shake it up a little bit!

D- and it’s heavy as fuck

C- yep! It’s so heavy live, it literally sounds like a metal song. With all the access to different genres on apple music or Spotify, I don’t think bands are scared anymore to come out with something completely different

What is your songwriting process like? Is it different each time?

C – We have a few different methods that we use but it definitely depends on the situation and what song we’re writing! Sometimes we start on a computer and build it up or us in a room just doing acoustics. We love to write in different ways.

You’re no stranger to Reading and Leeds. What’s been your favourite moment?

C- We played Reading two years ago and we headlined the BBC Radio 1 tent, it was carnage! We went on late and still performed our full set, we’re the latest band to ever play at Reading Festival

D- and we had a power cut at one point

S- Jesus! But what a record to hold

How do you like to get pumped up before you take to the stage? Do you have any pre-show rituals?

C- Loud music and Alcohol basically. Sometimes we like to smack each other’s arses

D- yep. a good old spanking… no no, we actually play some really aggressive hip-hop music, pop and dance music. You don’t really need to do a lot to pump yourself up for a day like today. We’re already feeling the intensity of it.

D- well you’ll be more scared in a few hours…

If you could pick any song from any artists that sum up YMAS journey as a band, what would it be and why?

C- for me I’d say ‘Straight To My Head’ from our last album! Just because it’s a good mix of a really strong chorus and we’ve been a little bit more experimental

M – As chewy was saying earlier, we have some many different techniques when creating music that we have so much of our experiences within a song

C- for ‘Straight To My Head’, we all sat in a room together then we popped some stuff on it from a laptop

D- it just sums up our band very well

What’s one thing you always carry around with you at festivals?

C-and a phone that doesn’t work

What song do you wish you wrote from the R&L lineup?

S- yes, what a great song

What’s been your most embarrassing moment whilst performing?

D- once when we started, we were all playing different songs

S- Oh no! How does that even happen?

D – Well, we all looked at the setlist wrong! Two of us were playing one song and the other three were playing something completely different. It sounded horrendous! either that or the day I pissed myself on stage!

S – I’d say pissing yourself has got to be worse, am I right?

D- I think it’s on the same level.

One gig that really stands out for you?

C- for me it’s got to be Reading Festival again but the first time we ever played the festival, we were all terrified and our tent was completely packed out. The crowd was mental

D- mostly full of all our friends from college! I’d also say the secret set that we did! It was very special

What’s next for You Me At Six?

C- we will be the closing the festival season with our biggest show at Gunnersbury Park on September 8th.

For more information on You Me At Six’s show at Gunnersbury Park, visit gunnersville.com