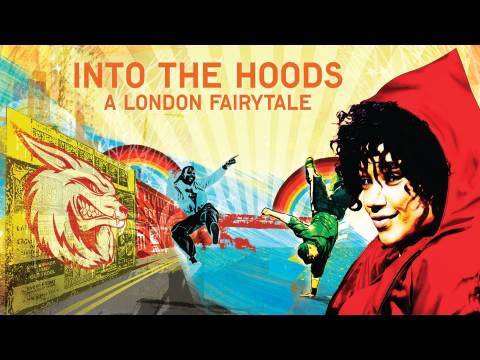 The Queen Elizabeth Theatre recently held a very unexpected musical theatrical. Moving from it’s original home at the Novello Theatre where it became a smashing sensation, Into The Hoods has re-opened in conjunction with Zoo Nation, offering the public another chance to see London’s first urban musical. Adapting a number of existing fairytale characters, it follows the story of seven residents of the notorious Ruff Endz Estate. When two school children wander carelessly through the daunting tower blocks, their only chance way to return home lies in the hands of the strangely excitable and positively devious Landlord. Through this twist, you’re given a chance to see how their lives of the residents intertwine, encountering love, greed, jealousy, rejection, deception and cunning. Yep, that’s right cunning! What do you expect when you’ve got a money hungry Wolf armed with a dodgy music contract?! Into The Hoods is all about the dancing. Contemporary, street, and ballet all have their place within the seemingly non-stop up-tempo choreography. All characters bust a move stage with edge-of-your-seat acrobatics leaving you surely craving for more. And if you think you’ve seen it all, wait until you see Fairy Gee!

The music rocks the house from start to finish with songs by Missy Elliott, Ludacris, Kanye West, Carl Douglas, Aretha Franklin and so much more, giving you one more reason to drag the whole family down there. Topped off with an array comical sound effects you’d be mad not to have a good chuckle during the Jaxx/Giant showdown! All in all, Into The Hoods is something for all ages and colours and is the best use of the word ‘urban’ in music since… forever. So unless you want to miss out on seeing the brave Prince climbing 10 ft of weave to rescue his rap star girlfriend or the electrifying body popping of retirement home residents, get online at www.queenelizabeththeatre.com/intothehoods and get down to Southbank for a truly hilarious and colourful show.