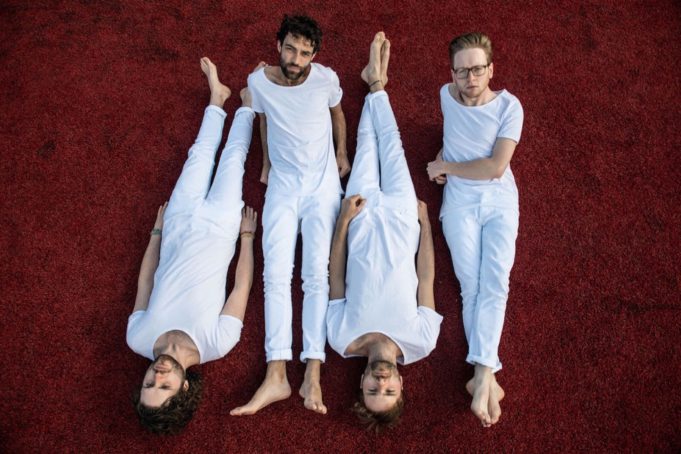 Irish Indie Pop Quartet ‘Orchid Collective’ embarks on their latest musical journey with their new single ‘Otherside’.  The lads have played Y Not Festival and supporting fellow Irish Band ‘Picture This’, they are certainly coming back bigger and better!

We actually all met while studying music in BIMM Dublin. Dave and I were in the first year of the course. He’s still pretty embarrassed about this but he posted an advert on a Facebook group for the college at the start of the year looking for musicians who were into Fleet Foxes and Crosby, Stills and Nash…I took the bait! It’s like online dating for bands, which is hilarious looking back now, considering how close we all are.  Dave later coerced our bass player Hugh to join the band a few years later, our drummer Darra then came on board and Orchid Collective was born.

We, really want to know why Orchid Collective? Is there a meaning behind the name?

The band originally started as a seven-piece which sounded great on paper but it quickly became a nightmare logistically when we started to tour. This is where the collective aspect came from. It still rings true today in a sense, the four of us are from different corners of Ireland and we all have come from quite contrasting musical backgrounds which turns out, it really balances each other out when we work as a group. The definition of Orchid is ‘a plant with complex flowers that are often showy or bizarrely shaped,’ which we felt was quite an adequate description of us as a band.

How did you first get started in music?

I think growing up we always were surrounded by music and our parents are all big music fans. There was always music playing in my house as a kid and the guys are the same. We’ve always reminisced listening to our folks vinyl and cd collections and we all just got that music bug from an early age. I think it was AC/DC for me, after watching live at Donington; I had to get the budget copy of the Gibson SG. We all had our embarrassing pubescent first band moments in school. Dave’s band could have made it to the Kerrang front cover, my haircut and Darra’s piercings could have made GQ mag and Hugh’s career peaked on the final of an Irish talent show called Class Act. There’s still footage rolling around Youtube somewhere if you look hard enough.

Can you tell me about your newest single?

I’ll let Dave take this one…

’Otherside’ is really just about what you want and don’t want in life. There’s a lot of young people with ideas of their perfect life, and I would never argue with them but I can’t help but think they’re all in a hurry to settle down without maybe experiencing things and exploring themselves for another couple of years. I think our generation has more freedom and opportunity to do this than previous ones so I can’t understand why so many people want to throw in the towel mid-twenties and set themselves up to do the same thing every day for the next 60+ years

For those that haven’t heard of you, can you describe your sound

We describe our sound as Indie post pop- rock (pretentious). Throw the National in with The 1975 and mix it together with a bit of Explosions in The Sky, add the Fleet Foxes vocal harmonies and you’re pretty much in the ballpark.

You’re currently touring at the moment; do you have any pre-show rituals?

Dave rocks a pocket of puke and Darra does 44 minutes of yoga before every set.

What makes ‘Orchid Collective’ stand out from other bands in the Irish music scene at the moment?

There’s an amazing eclectic music scene in Dublin at the moment and it really feels special to be a part of it in some way. There’s a huge hip-hop/ RnB movement with the likes of Soule and Kojaque, which is culturally very fresh and exciting in Ireland at the moment. There’s also incredible artists like AE Mak and Saint Sister who are creating music that is unique and sonically amazing. I think where we stand apart is our four-part vocal harmonies and honest lyrics about simple subject matter. We wear our heart on our sleeves but we don’t overcomplicate things and I feel people can relate to that. I think this is where we stand out.

Who would be one artist or band that you would love to support or perform with?

There’s a Canadian band called Half Moon Run who we would consider a huge inspiration on our sound and we would probably all agree that a tour with them or the likes of The National or Fleet Foxes would be incredible for us and for their audience. And of course, we have our dream shows, Dave with Glen Hansard, Shea with Pearl Jam, and Hugh with Green Day and Darra with Celine Dion.

What has been the best advice you’ve received since starting ‘Orchid Collective’?

The best advice we’ve probably received so far is to not focus on what everyone else is doing but what we’re doing. I think in today’s society of social media it’s too easy to get bogged down in the narcissism of it all, looking at the highlight reels of everyone else’s lives. We’ve just learned to stick in our own little bubble and steer our own ship, which I think is the best advice we’ve ever received.

What’s next for Orchid Collective?

We’re just back from playing our first London show which was amazing so I think we definitely plan to get back over there in the next few months. We have an Irish tour booked for this summer on the back of Otherside that includes some great festival appearances, which were super, excited about. Then it’s straight back into the studio to work on our next single, which we plan to release in October. We’re planning on getting back to the UK and delving into Europe for that release.

You can catch Orchid Collective on tour here: