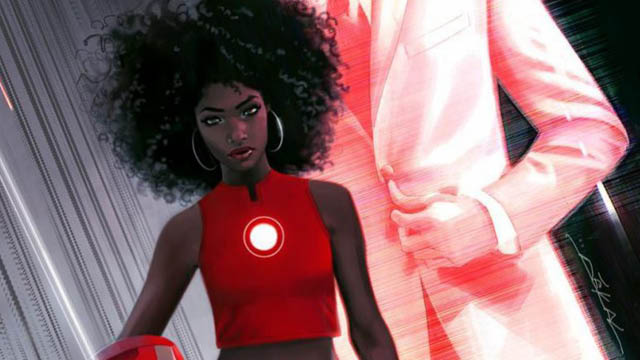 NEWSFLASH: Marvel comics have revealed that Iron Man Tony Stark is to be replaced with a teenage black girl named Riri Williams.

Riri Williams is a genius who enrolled at MIT at the age of 15, and Stark finds out about her after she builds her own Iron Man suit in her university halls. One of the things that stuck with me when I was working in Chicago a couple of years ago on a TV show that didn’t end up airing was the amount of chaos and violence. And this story of this brilliant, young woman whose life was marred by tragedy that could have easily ended her life — just random street violence — and went off to college was very inspiring to me. I thought that was the most modern version of a superhero or superheroine story I had ever heard. And I sat with it for awhile until I had the right character and the right place.

As we’ve been slowly and hopefully very organically adding all these new characters to the Marvel Universe, it just seemed that sort of violence inspiring a young hero to rise up and act, and using her science acumen, her natural-born abilities that are still raw but so ahead of where even Tony Stark was at that age, was very exciting to me.

Riri Williams
What started as a challenge for herself ended up becoming a secret project to create her own suit of armour, in a manner similar to the Iron Man Armour. After weeks of work, Riri finally created a working prototype, using mainly stolen material from campus. When she was showing it to a dorm mate, campus security knocked at her door to inquire her about her recent suspicious activities, prompting her to don the suit of armour.

After flying around the country trying to get the hang of her suit’s flying capabilities, Riri intercepted a couple of inmates escaping from the New Mexico State Penitentiary. She managed to stop the speeding truck they were using as a escape vehicle, but at the cost of her armour’s integrity.

Social Media has seen mixed emotion to the new Iron (wo)man. Some like, some hate it, mostly people are welcoming the new character with open arms but as we all know what social media is like, there are also some very unhappy people.

What are your thoughts on the new character? Like or dislike? And is Riri Williams inspired by Rhianna? Only time will tell.