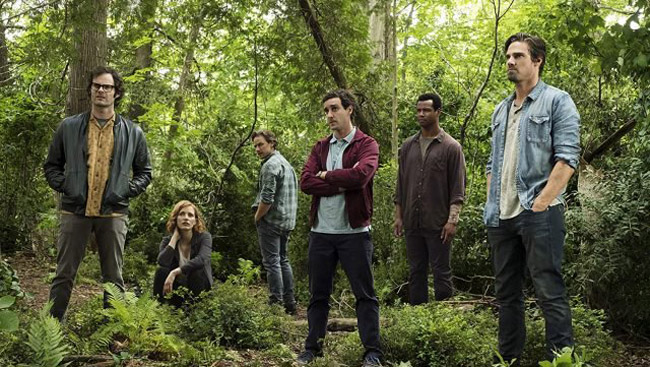 A perfect casting can’t defeat the curse of a repetitive narrative and an overzealous need for detail.

Director Andy Muschietti is back to unfurl the second half of Stephen King’s classic novel, 27 years after the Loser’s club first encounter with the freakishly frightening clown of Derry, Pennywise. Even in adult form and problems of their own in their grown-up lives, what we get is pretty much a series of repeat pandemonium that just never seems to end.

Now grown adults, most of the loser’s club have moved away from Derry living their problematic lives without a single memory of the events from 27 years ago. All except Mike (Isaiah Mustafa), never having left Derry, his memories have never faded. With the re-emergence of horrific events unfolding in the town once again, Mike knows it’s down to one evil entity alone, Pennywise (Bill Skarsgard). Equipped with the memory of the pact they made all those years ago, Mike gets the gang back together for, hopefully, one last stab at getting rid of the mother of all scary clowns once and for all.

Spanning just under 3 hours is just a stretch way too far. 90% of the running time is focused on giving the spotlight to each member of the gang taking them on a journey of memory discovery accompanied with flashbacks to their childhood where the child actors from the first film return. Each struggle through their anxiety, guilt-ridden issues accompanied with the assistance of Pennywise. This could easily be construed as and linked with the repression of their inner demons which seem to be re-emerging in their adult lives. Could the two be linked? We never actually find out.

The casting for the adult loser’s club is pretty much on a par with excellence and their adult lives have paper-thin links to their formative years. James McAvoy plays Bill – now a writer for the movies and novels his one major issue is that he never quite gets the hang of great ending. Jessica Chastain takes on the flame-haired Beverly; successful in her professional life her personal life mirrors that of her own childhood. Bill Hader takes on Richie, now a wise-cracking comedian; he can’t help but struggle with the secret of his sexual identity. Jay Ryan takes on Ben, once the chubby kid with an infatuation with Beverly, he has grown into his skin to become a successful architect and a rather hunky one at that, but his obsession with Beverly has faltered.

On many occasion, it plays like a homage to classic horrors gone before with nods to films like The Shining and The Thing. The 80’s is still prominent with a New Kids on The Block track making its way into scenes and A Lost Boys poster still donning the walls of the underground safe bunker they had as kids and more often than not, in the final scenes especially, Pennywise seems to have some kind of family resemblance Beetlejuice, and that’s not to mention a cameo or two along the way.

Filled with themes on homophobia, depression and abuse Muschietti knows how to deliver jump scare after jump scare and you wouldn’t expect any different from a horror of this magnitude. Also, a little humour goes a long way, but the balance is never quite right. For all the good work done to freak the hell out of the viewer, it becomes a bit of an anti-climax when the humour outweighs the shit the pants moments.

A repetitive narrative and an overzealous need for detail to paint the bigger picture and needlessly stretch out this picture may just be the curse that Pennywise intended to torment us all with.

IT Chapter Two is out in cinemas September 6th