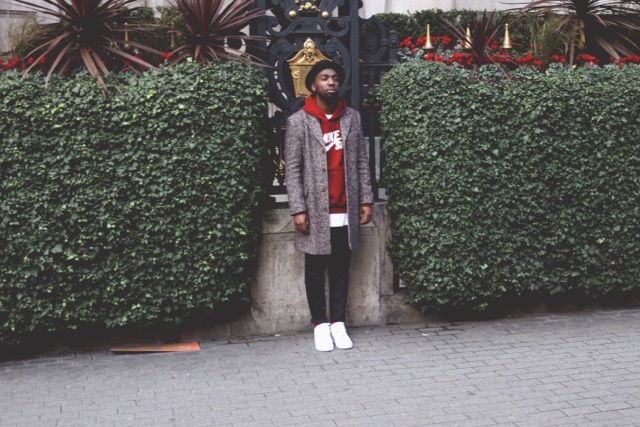 Last week we sat down with emerging, rising singer/songwriter, J Warner, to chat about his debut EP Est. 1990, working with the likes of Wretch 32 and Tinie Tempah and his publishing deal with Disturbing London.

Releasing his debut EP “Est.1990”, exclusively via tastemaker platform Earmilk, the young singer/songwriter has proved his worth as one-to-watch in the UK music scene. Having worked with numerous emerging talents; J Warner has also shared his collaborative efforts with the likes of UK chart topper Wretch 32, and burgeoning talent Kojey Radical.

You have quite a strong distinctive soulful tone to your voice, it’s very soothing on the ears, and who would you say are your musical influences?

It kind of ranges from like Gospel acts like Fred Hammond to Bob Marley, I grew up in the 90’s so it’s like the pop bands, obviously Michael Jackson and then there was weirdly Coldplay, I take things from that when my vocals are a bit more subtle. Stevie Wonder a lot of Soulful artists. I was listening to Gospel until I was about 8 years old, that’s all I was allowed to listen to.

So when did you start performing/singing?

Performing I actually haven’t done a lot of. So here’s a story so I was in year 10 and I had my options and I chose music. The teacher was like I’m going to put 3 people in singing lessons, Obviously at that time me being a guy that was making grime beats trying to be an MC I was like nah. Then she chose 2 girls and chose me, so I was like OK cool yeah I’ll just do it. So I had a session with the singing teacher, she told me my voice had so much potential you should carry on etc. Then my thing was to write and produce my own songs. That was when I was 16, so it all started from then but it was funny to me because if I never had taken the singing lessons then i don’t think I would be singing today.

For one so young you certainly seem to have an extremely impressive list of credentials behind you. Can you tell us who you have previously worked with and how you’ve managed to work alongside these people.

Mmmmm yeah OK its weird everything just kind of fell into place, Even with the whole DL situation. So yeah I have worked with JLS, Tinie Tempah, Sasha Keable, Wretch 32 next on the list is hopefully Jesse J (laughs). I’ve just done loads and loads of songwriting for projects and stuff; It’s kind of like a lottery with the publishing stuff. With the Tinie stuff I was sending, I had an email for him so I was sending him stuff and then he heard something and he was like ‘yeah this is sick I’m going to use this on my EP’ and then he put out his Happy Birthday EP and kept me on it, that was a big deal for me cause I was the only unsigned person on there. Then my situation kind of just manifest from that, even the JLS thing kind of manifest from Tinie, cause there was a producer he was working with who wanted me to write a hook for him and then the same producer said I love your work and said he was working with JLS do you want to work on this and that’s how it happened. Then everything else has just fallen into place via Disturbing London.

You’re signed to a publishing deal with Disturbing London; I can imagine this was a pretty big deal for you. How did you land the deal?

That was literally via the Tinie situation, I was working with Sasha Keable before she was signed and they heard my stuff through that as well and they were interested from there and just gave me a chance really.

So would you say your stronger talents lay in your songwriting or singing?

I would say now because of when I signed my publishing deal I literally just focused on writing and trying to master the art of songwriting. Because I was so heavily influenced by RnB and Gospel, I used to get sent a lot of Pop stuff which was hard for me because I used to just write over a pop beat and then my Manager at the time was like that’s not a pop song it’s an RnB song over a pop beat. So I had to really study and understand the different techniques of it, so I would say now at this point my writing is probably the strongest but now I am working on my vocals it has naturally grown through cutting demos and all that stuff as well.

Has it lead to many opportunities for you so far?

It’s opened the door to a few things, like the actual affiliation with Disturbing London and obviously what comes with, as it’s a joint venture with Sony as well, so you kind of have two people just throwing work at you so it’s opened up a lot of opportunities to an extent.

You have an EP coming out at the end of the month! What’s the title of the EP

Est.  1990 because I was established in 1990 it’s as simple as that (laughs), as regards to the sound it has so many different elements and influences to it. Because of me growing up in the 90’s and being exposed to all of these different things as well, that’s basically the main reason.

Is it going to be available as a free download?

Yeah it’s free. A few people that have heard it the work before its come out have been like you’re crazy for putting it out for free but it’s my first body of work so I just want to share that. You can of just want to build like a genuine authentic following as well rather just trying to sell people stuff that they don’t really know what your about.

You’re obviously a strong songwriter, you co-wrote JLS’s track Give Me Life and also wrote and performed on Tinie Tempah’s track 5 minutes, Did you write all the tracks on your EP yourself?

Yeah every single one, There was one minor co-write but I was still quite involved in it which was a verse on a song called I thought with a girl called Jade, a very talented singer/songwriter but that was just literally just trying to get her to put herself into it. Apart from that everything else is I have written myself. There are 9 tracks including the intro/interlude.

I’ve heard Do or Die already, what was your inspiration behind it the song and the whole EP? Does it tell us a story?

I don’t know, I was on the train coming home after doing a session with a producer and he sent me the beat and I was literally just writing it on the way home. I was actually thinking let me write a type Maroon 5/Adam Levine sounding kind of song, I don’t know why. I feel like sometimes when I write songs I don’t feel like that’s what I am going through but subconsciously when I listen a couple of weeks/months later I think ah yeah that is kind of like relevant to what I was going through. I’m kind of passionate about relationships and when I see other people in relationships and stuff I get passionate for them and try to give them advice. Especially some of my boys, I’m like you’ve got a good girl man that is ‘Do or Die’ material. I think overall as a body of work the listener will understand who I am, it shows my ability to show how versatile I can be as well. It hasn’t got a proper theme.

What’s your favourite track on the EP and why?

I’ll say I have two favourites, So Petals Fall that’s the last song it has like a new age Motown/Glee feel.. It’s weird (laughs). There’s another song called Skin, Ahhh I don’t know as I love Chill Chase as well, Chill Chase was the first song I put out but that song was special because when I heard the instrumental it just made me feel a certain way and I free styled the chorus. So I’m always going to have a special connection with that song. I literally didn’t even know why I said that I have all these memories; it just makes sense to me. With Skins is probably one of my favourites because it’s the only song that’s the closest too what I think people are expecting from me in regards to being RnB, Just being an RnB Artist and even still it’s like alternative RnB, It builds up and gets more musical as it goes on. I have my little bit at the end where I start going crazy which brings out my Gospel side, so I guess that’s my favourite overall.

I hear you have worked with Wretch 32 on the EP, who else have you worked with?

Wretch is probably the biggest name to be honest, the other 3 features I have on there are what people would class as unknown or up and coming people but I didn’t want the EP to be feature driven at all. The only reason Wretch is on Chill Chase is because I played him the whole EP and when we got to that song he was like I want to be on the song. I was like OK; I’m not going to say no.

Describe the sound and feel to the new EP.

When I was with Wretch and I had played it to him I was trying to figure out what genre I would put it in, normally I would say alternative RnB but I still don’t feel like it is that. He said it was like 3 dimensional music so I’m like 3D Music. It’s intriguing.

What has the support been like leading up to the release?

It’s been cool, it’s been alright. I just made the music and I haven’t thought about who’s going to like it or who’s it going to appeal to. I’ve just made it for myself essentially I’m just choosing to share it with everyone. Dj Charlsey at Capital extra has played it, we’ve had some smaller radio stations like Bang play it.

Have you got any shows lined up to showcase the new EP where people can come down and experience your new music?

Not that I can disclose right now, we’ve just done the EP launch about a month ago now. That was such a big deal and a sold out show as well which was amazing. I will be doing some shows though which are more specific & intimate. Listen to the haunting and thought-provoking “Chill Chase” with Wretch 32 here: https://soundcloud.com/jwarnerofficial/j-warner-chill-chase-ft-wretch-32/s-dko2u