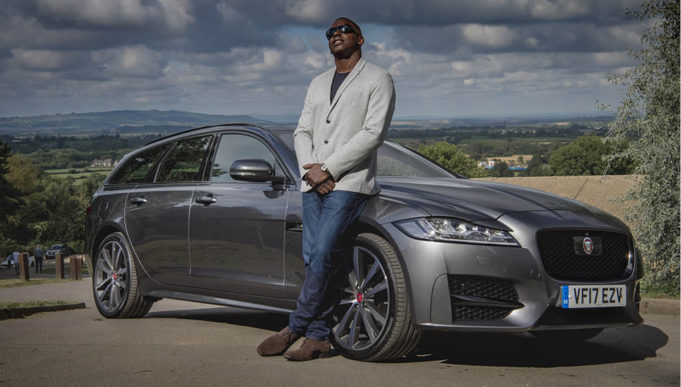 Jaguar has launched the brand new Jaguar XF Sportbrake and I had the pleasure of driving it in the Cotswolds and playing tennis with Tim Henman.

In a land where car manufacturers are producing SUV after SUV (they are the latest trend in cars, you know) Jaguar who currently has 2 SUV’s namely the Jaguar F-PACE and the baby version, the Jaguar E-PACE, both of which I’ll be reviewing soon, has gone against the grain with the relaunch of the Jaguar XF Sportbrake.

First up, I think the word estate car has negative connotations. When I hear the word Estate Car, I either think of 1. A builder, carpenter or other tradesmen, that has to carry lots of tools and opted out of buying a white van or 2. A family wo(man) with lots of children. Maybe this is the same reason, that Jaguar has named it the XF Sportbrake rather than the XF Estate.

It drives like a saloon, it holds the road like a saloon, you can barely notice or feel the extra size of the booty when driving and that’s what makes this car a pleasure to drive. Measuring 4,955mm, the new Sportbrake is 6mm shorter than the previous model, but its wheelbase has been lengthened by 51mm to 2,960mm. This optimises rear legroom and load space and contributes to the vehicle’s refined ride quality.

Tim Henman and the Cotswolds

WTF has Timmy got to do with this? I hear you ask. Well, Tim Henman is the brand ambassador for Jaguar and on my trip to the Cotswolds to drive the XF Sportbrake, I got the opportunity to play tennis with Timmy and also rev the Sportbrake through the Cotswolds for my test drive. *Did you know that the XF Sportbrake can hold 6500 tennis balls in the booty? You, do now*.

Tennis with Tim Henman
1 of 5

Playing Tennis with Timmy was great. He’s such a personable character and instantly likeable. He taught us trick shots, and we had an exquisite lunch at the beautiful Dormy House Hotel with him.

p.s. if you are looking for a romantic staycation in the UK, then look no further than the Dormy House Hotel.

I wasn’t alone on this trip. I was with a bunch of influencers who were all here to review the car too (does this mean I’m officially and influencer now? Whoop) the lovely Niomi Smart as well as The Posh PT, super fit Gabrielle Sey and Ricki Hall, who both made me look like an out of shape dude rolling with fitness models were also in attendance.

We all choose our cars for the weekend, I choose the cool and sultry Corris Grey. Niomi Smart chose the Hot FirenzeRed, The Posh PT and Gabriel shared a Corris Grey version too and Ricki chose the stunning white version.

I let them all set off while I connected my Bluetooth and played a DJ Black Coffee mix to test the speakers. The super-fast 10.2 inch Touch Pro infotainment system acts as the driver’s on- board digital butler – with live traffic updates, connecting phone calls, or playing TV. Once I had connected and taken all my photos, I set off on the pre-installed Sat Nav route set for us.

I was at least 10 – 15 mins behind the rest of the influencers when I set off. I put the car in sports gear and pressed the gas, trying to get that fast and furious effect. Unfortunately, it wasn’t a fast and furious effect but it was bloody fast. Revving through the Cotswolds at high speeds with no speed cameras was bliss.

It was a beautifully sunny day with dry roads so I was able to push the car to the limits. The drive was sweet, I totally forgot about the size of the booty. And for a moment, the Cotswolds saw a low rider, pumping music and revving through their clean and quiet city roads. WTF!

The Jaguar XF has everything you expect from a Jaguar. Stunning interior design, comfortability with great ergonomics. Every thing is within hands reach and within your peripheral vision.

If you’re thinking of buying an SUV, the Jaguar XF Sportbrake is a great alternative. Instead of driving in an upright seated position, you get the low ride car feel with all the extra space you get in an SUV.

The sound system could have had a bit more deep bass and I’d love to test drive the even faster model, but all-in-all, this is a great vehicle and turns an old looking Estate car into a vision of beauty.

Head on over to www.jaguar.co.uk and see for yourself!