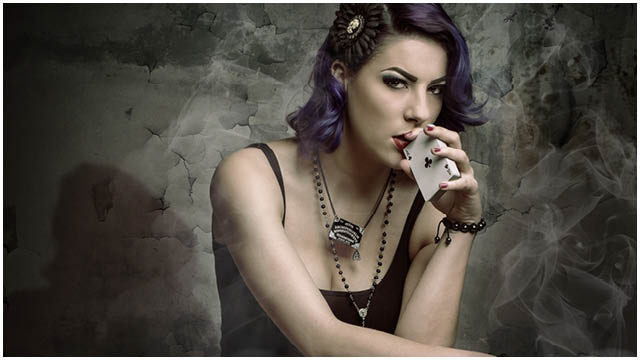 This British beauty has an impressive skill set of daring magic, including fire breathing and burlesque. Jasz Vegas is extremely dangerous, sexy, breathtaking and her original performances will ensure Jasz Vegas is a name that remains on your lips for a long time to come. We are so excited to see a female magician break the industry, we love the fact the Jasz Vegas is a beautiful and talented magician.

Looks can be deceiving, and Jasz Vegas is proof of that. The sexy, purple and blue haired bombshell looks like she could do no harm, and she doesn’t, not to other people anyway. However, she is known to eat light bulbs, swallow razors, stick needles in her eye, push 4 inch nails up her nose and trap her hands in bear traps. Next to her daring stunts, she also does amazing magic tricks, which she will share in the new thrilling magic show: Killer Magic.

We got a few moments with the stunner as we tried to probe her on magic tricks, dating escape strategies and Magilesque.

You’re the only female magician to feature on BBC’s Killer magic, how did this come about?
Objective productions, who produced Killer Magic, invited unique and skilled magicians to come and have a chat about their new show, Killer Magic. Out of all the top magicians who visited them they chose five, one of which included me! Objective Productions were looking for magicians with a unique style of magic and their own brand of charisma. I knew Damien O’Brien and Dee Christopher before working on the show and met Ben Hart and Chris Cox when we started filming. We all get on and have a lot of banter, which I think brings a great element to Killer Magic!

Do you feel pressure being the only female magician on the show?
Only as much as everyone else on the show! We were all under pressure to avoid the forfeit, a Killer Trick (a trick that has either killed or injured a magician in the past.)

What are the other magicians like on the show?
They are fantastic! We all have our own way of doing things, which brought a great dynamic to the team.

When and why did you decide to become a magician?
I have been performing magic since I was 12 years old. I live to entertain others and bring a smile to their face and what better way than magic?

What’s the hardest trick you have mastered?
Every trick brings its own challenges and they vary from trick to trick. I practice a lot to make sure every effect I perform is at its most entertaining!

We have seen that you are also a hypnotist, how did you learn how to do this?
I learned from one of the top hypnotists in the country, Anthony Jacquin. Have you found it hard to break into the industry being a female magician?
I have faced the same challenges that all magicians face when breaking into the industry. I believe it is all about your personality as that is the greatest asset any performer has.

If we wanted to become a magician how would you suggest we start?
I would suggest learning some simple tricks to impress your friends and family and grow from there.

Off the top of our head we cannot seem to think of a famous female magician, which magician(s) inspire you the most?
Many magicians such as David Blaine and Simon Drake inspire me. I like to watch performers with a unique style and character.

You are very beautiful and sexy too, has this been an issue for you i.e. being taken seriously as a magician?
Thank you! I have never really thought about my looks hindering me when it comes to performing, I strive to perform the best tricks I can and I let the magic talk for itself.

Tell about a bit more about Magilesque?
Magilesque is an art form that combines both the tease and elegance of Burlesque, with the wonder of magic!

What do you prefer most burlesque dancing or performing magic tricks?
I couldn’t possibly choose! Both require a variety of skills and I enjoy them both for different reasons. It’s like asking a mother to choose between two children!

You may find this annoying but do people ask you to do a magic trick every time they see you? We probably would…
I love to perform! It isn’t annoying and most people tend to ask at suitable times.

We saw the clip of you eating the rose and smashing and eating the glass on the date, have you ever done this on a real date? It would be a laugh wouldn’t it?
Yes it would be rather funny! When I filmed that trick for the pilot of Killer Magic the guy genuinely thought he was on a real date. So yes, I guess I have performed it on a real date (for him anyway!).

What’s the worst date you have ever been on and can you teach us a trick that we can use as an exit strategy on a bad date?
I don’t think I’ve ever been on a terrible date! Also, a magician never gives away their secrets.

We love your style and your hair, who are you style influences?
Thank you! Many people, such as Dita Von Teese and Kat Von D, influence me. I love it when someone is confident enough to express their personality through the way they look on the outside.

Give us your favorite beauty tip.
Just be yourself. I do believe that beauty comes from the inside and your personality is the most beautiful thing you own.

And finally tell us something that you have never said in any other interview.
That’s a tricky one! I am a very social person and I am blessed to be surrounded by so many awesome people! I love to go out with my friends and spend time having fun. Life is too short to not be happy.