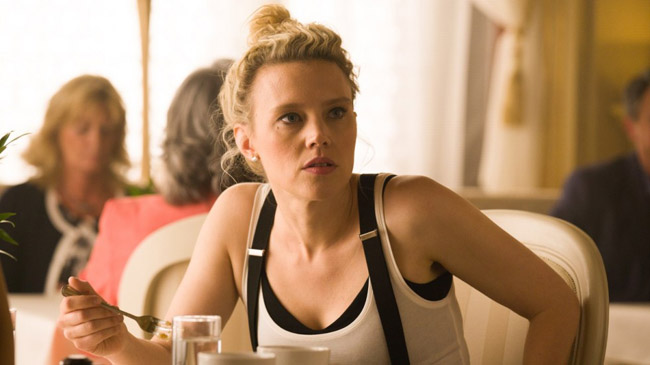 Actress and comedian Kate McKinnon has made waves across the pond with her side-splitting skits on Saturday Night Live and won over audiences everywhere in Ghostbusters and Rough Night. Funny-woman Kate McKinnon has a knack for impressions, from Ellen DeGeneres to Hillary Clinton. To celebrate her latest film, The Spy who Dumped Me, which hits UK cinemas on 22nd August, we’re taking a look at her most memorable impersonations. He may be easy to make fun of, but McKinnon takes it to another level with an impersonation of Justin Bieber’s ‘bad boy’ persona complete with tattoos and cringy one-liners. Her body language and mannerisms are spot-on, managing to pinpoint exactly what the public loves, and hates, about the pop superstar. In this SNL skit, McKinnon proves she’s more than a talented comedian, but also a pretty good rapper due to her impression of Australian rapper Iggy Azalea. From the accent to the dance moves, Kate shows that she’d also make a pretty good rapper… who knew?! One of Kate McKinnon’s funniest impressions to date is her practically identical replica of talk show host, Ellen DeGeneres. Appearing on Ellen’s chat show, McKinnon mimics Ellen perfectly from the outfit she wears down to her famous dance moves and other quirky movements. McKinnon is so good you’ll think you’re seeing double. This impersonation of former presidential candidate Hilary Clinton is up there with her best – from that iconic pantsuit and perfectly-coiffed hair to hair to her spot-on Clinton voice. With an unexpected cameo from the real Clinton, the skit provided much-needed laughter in a controversial election race. Alongside Sofia Vergara, Kate McKinnon hilariously re-enacts a Pantene commercial where her words are not ‘easy’ to pronounce compared to Vergara’s words. Mimicking Penelope Cruz’s iconic Spanish accent, McKinnon attempts to pronounce the words on the teleprompter and fails miserably.

Kate’s latest film, The Spy Who Dumped Me, sees her alongside Mila Kunis as two best friends who get entangled in a conspiracy when one of them finds out her ex is a spy. They set off on an international spy adventure attempting to save themselves, and the world, in the process.

Check out the trailer for The Spy Who Dumped Me here: