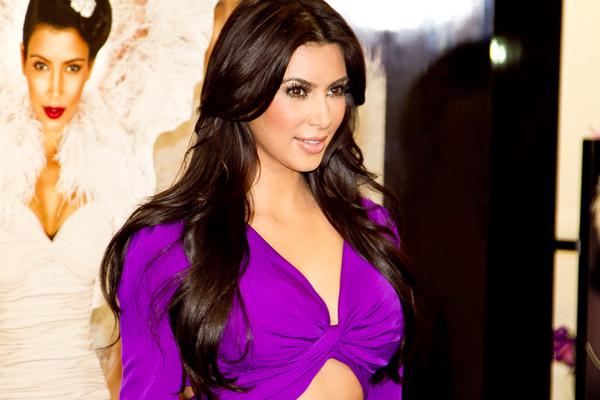 Stunning US reality star, model and entrepreneur Kim Kardashian brought Oxford Street to a standstill as she launched her new fragrance.

Hundreds of screaming fans queued outside Debenhams – with some camping overnight – to catch a glimpse of the bootylicious star. This is her second appearance in London and she was dressed in a figure hugging purple and orange ensemble from the Gucci spring/summer catwalk which wasn’t very flattering.

The night before, the 30 year-old squeezed into a Dolce & Gabbana gown for the Glamour awards where she was named as Entrepreneur of the Year.

As she passed the crowds she waved to fans who she had asked their input on the scent. 200 lucky people who bought her new perfume, were given VIP passes to meet her.

Kim said: “When I started developing my fragrance, I really took inspiration from the feminine, pretty things I surround myself with – I thought about what makes me feel confident and special, and translated that into a scent that all women can enjoy,”

Kim Kardashian is best known for her E! Entertainment series Keeping Up With The Kardashians which stars her sisters alongside their mother and her husband, Olympic gold medal-winning decathlete Bruce Jenner. Last month Kim got engaged to basketball player Kris Humphries, with the addition of a fragrance to her ever expanding empire the future is looking bright for this US beauty.

Kim Kardashian the perfume is available exclusively at Debenhams now, and in major stores from July.