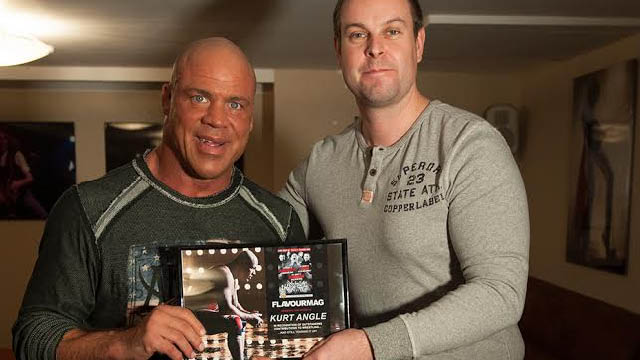 Representatives for Flavourmag were backstage at Wembley Arena on Saturday night to present the wrestler, actor, and Olympic Gold Medalist with a very special award.

Kurt, who is a true American hero, has made England his second home over the last ten years, competing in world-class pro wrestling matches in some of the countries most prestigious venues. During this time, Flavourmag have been fortunate enough to interview him on several occasions, not least 2 years ago when we did a fun live hangout from London’s Google HQ

We talked again to Kurt just a few weeks ago to get his thoughts on a number of wide ranging issues, including the Ronda Rousey loss in UFC.

The submission specialist is also making a name for himself in Hollywood, having appeared in ‘Pain & Gain’, and ‘Warrior’.

Despite his status as an elite athlete, and his abilities as an in-ring performer, Kurt Angle remains one of the most down to earth celebrities you could ever meet. His tireless commitment to wrestling as a form of sport and entertainment is quite simply unmatched.

At 47 years of age, and still at the top of his game, Kurt has decided to take around a year away from the ring – a much deserved break for someone who has elevated the ever growing TNA Impact Wrestling promotion. Flavourmag were backstage at Wembley on Saturday night to present the award for ‘Outstanding Contributions to Wrestling’, just hours before he stepped between the ropes of the TNA Maximum Impact Tour. Whilst the WWE will inevitably come calling with invites to their Hall of Fame (and rightly so), it has been with TNA, and here in the UK, that Kurt has enjoyed some of his best years.

No other athlete has won both a Gold Medal, and a world title in wrestling. Kurt has overcome many personal and professional obstacles during his many years in the spotlight, but has come out the other side as an icon that deserves respect, and as someone who makes sure that the younger generation is given a chance to shine too.

The outpouring of love from his fellow wrestlers in London, and the thousands of fans in attendance, is testament to how great Kurt Angle really is. From all at Flavourmag, we wish our friend Kurt Angle a great break, and can’t wait to see what you do next!