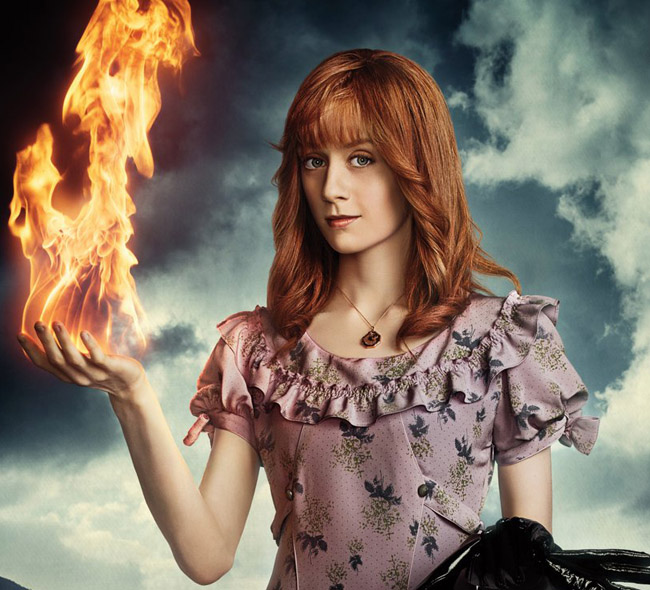 The Falling star, Lauren McCrostie saw herself with the opportunity of a lifetime when presented with the role of Olive – the fire starter – in Tim Burton’s fantastical Miss Peregrine’s Home for Peculiar Children alongside stars such as Judi Dench, Eva Green and Samuel L. Jackson.

Her first major production saw her dream finally start to materialise in this tale that tells the story of a young boy, Jake (Asa Butterfield) when he discovers clues to a mystery that spans alternate realities and times, he uncovers a secret refuge known as Miss Peregrine’s Home for Peculiar Children. As he learns about the residents and their unusual abilities, Jake realises that safety is an illusion, and danger lurks in the form of powerful, hidden enemies. Jake must figure out who is real, who can be trusted, and who he really is.

For the home entertainment release of Miss Peregrine’s Home for Peculiar Children our Film Editor, Zehra Phelan, sat down with Lauren to have a catch up on her time filming the movie.

You’d be pretty mad to turn down working with Tim Burton, what was it about him that made you want to work on the film?

To be completely honest I was in the middle of doing my A-levels and my agent was being very selective with the auditions I was being sent. So when the Tim Burton audition came through I thought that would be amazing. I never thought I would get the role, never thought I would be lucky enough to get it. I thought it would be a good opportunity to go and meet the casting director and be seen – and a bit of a break from revision – I didn’t hear anything for ages and finally was asked to come back for a callback and my whole dream started fabricating. I never saw it as a possibility before the call back just because it was such a massive production and I haven’t had much experience beforehand.

So when you got that phone call that you got the role, what was your reaction?

I think I screamed and didn’t stop screaming. I can still remember it now, I had a missed call from my agent, it could have only been about this film. So it was either the casting director wanting to know how cool I was again or what colour my eyes were, something they had been asking in the lead up to this call. I rang my agent back and said they wanted to cast me, I don’t think I cried because I was so happy but I would have cried through absolute joy.

You play Olive, who is one of the elder children of the group, what was it like to work with such young children?

It was strange, I’ve always been in environments where I am around young children, family friends or babysitting or working as a teaching assistant but I had never worked with them beforehand. It was so funny you forget how much energy kids have – that makes me sound so old – especially kids that do acting and performing, they are even more energetic, even more creative, even more bouncing off the walls. I wouldn’t say chaotic because it was a very tightly run ship but it was incredibly energetic. Some of them are extremely experienced and talented so I was picking up as much experience from them as I was from someone like Judi Dench.

Olive has the ability to create fire at the merest of touches when filming I can imagine this is hard to imagine as the effects are put in at a later stage?

Well Tim actually wanted a lot of the special powers and special effects to be real, so a lot of what you see wasn’t added with CGI, there was minimal CGI. The ghastly beasts were CGI. There were special effects teams with wigs of fire and controlled everything that made it look like I was actually doing it, which made it so much more real for me because it was actually happening. It made the world much more believable. It was much easier to act because I wasn’t really having to act. I actually wanted to get closer to the fire to make it feel more real but all of the team were like “Lauren Stay Away” I had a prosthetic arm which I used all the time which was like an arm sleeve. It was like an extra long glove, it was very strange as I had a cast of my arm done and they took pictures of my arm to paint it onto this cast so it looked like it was a spitting image of my arm.

The set and costumes are pretty spectacular, a feast for the eyes is, this must off helped getting into character?

Definitely, it was such an enjoyable experience getting into my character every day, I had a playlist which one of my close friends helped me create and getting into the whole costume. There were so many layers, it was so intricate, it was so well thought out and researched even the fabrics were so beautiful. Ella (Purnell) and I weren’t actually allowed to sit down in our dresses because they were silk and they would crease. The costume designer would be very vigilant (she’s also incredibly talented as she won two Oscars). It was wonderful to get to wear such beautiful costumes.

Burton’s cinematic worlds are always fantastical; surely you had a favourite moment/scene from Miss Peregrine’s Home For Peculiar Children?

The scene I was most excited to film, was when I warmed the teapot at the beginning when Jake came into the house for the first time and I was making tea. I love tea, so that was like a connection between Lauren and Olive. One of my favourite scenes in the film is actually – which is so funny because I remember every single person on set was so fed up of doing this scene, and I’m not joking we literally spent five days on this scene. No one talks in it, its one shot in the film – it’s when we put the gas masks on to watch the reset. That’s probably one of my favourite scenes just because it’s so well done and beautiful. I just remember nobody wanted to do that again or play with the gas masks because it was such a long process because it would ruin our makeup to keep repeating. We had to do a shot of putting the masks close to our face, then taking them off… it’s not all what it seems.

You star alongside Eva Green and Samuel L. Jackson did they impart any pearls of acting wisdom?

I didn’t get that much time with him on set but just watching him and having him there, the way he did things and conducted himself, Even though he didn’t say anything to me I learnt from his presence.

If you had to choose a favourite Tim Burton film which would it be?

In the past, you starred in The Falling alongside Game of Thrones Maisie Williams and Florence Pugh who is to star in the upcoming Lady Macbeth – What can we expect from you in the future?

To be honest, I can’t reveal too much, I’ve got a meeting for a couple of things; I’m just waiting to see. Miss Peregrine’s Home for Peculiar Children is out today on Digital HD.