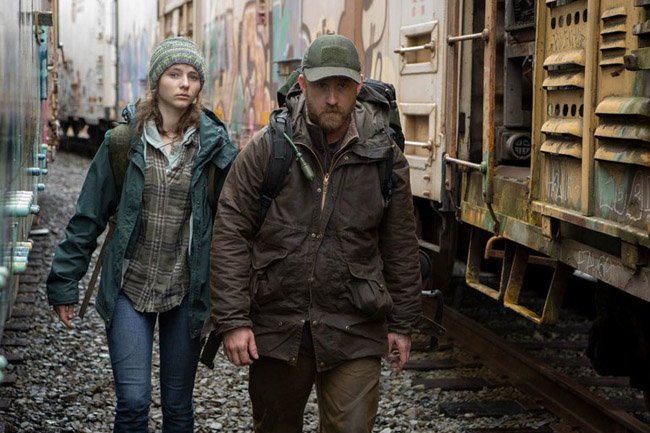 It’s been eight years since director Debra Granik presented Jennifer Lawrence in Winter’s Bone. With only two documentaries in that time, the filmmaker embarks on a delicately emotional feature with Leave No Trace; an adaptation of the novel My Abandonment by Peter Rock.

Going back to nature and the fundamentals of parenthood, Granik produces a nuanced story of self-imposed homelessness; where one army vet Father’s love to protect his daughter from the rules and constraints of society influences him to bring her up in the vast wilderness. Well, an oversized woodland park in Oregon to be precise.

Ben Foster and Thomasin McKenzie adopt the roles of the duo Will and Tom. Will is a bearded recluse, consumed by his trauma while serving in the American army. Having set up camp in the middle of the woodland with his 13-year-old daughter Tom, they spend their days foraging through the park for wild mushrooms and other edible plants. Playing chess bides the time, while plans and drills are put in place in case they are ever discovered by a passing stranger.

But, of course, everything Will is doing is completely illegal; not only is living in the park illegal, but keeping his daughter out of school too, but Tom never complains because she merely doesn’t know any better. That is until they are discovered. Thrown into an intimate community, Tom begins to enjoy her experience of living a conventional day-to-day life and having contact with others. Will, on the other hand, feels claustrophobic with not only living in a house but having to hold down a regular job. Each passing moment sees Will edging to the brink of upping up sticks and taking off yet again. Will’s behaviour is evidently a visible sign of PTSD, but this subject is never addressed but just hangs in the air like an annoying stench.

It’s a low-key drama that moves at a slow-pace but it feeds the soul with the emotional bond that a Father and daughter has. It doesn’t solely focus on the Father’s need to protect his daughter but the daughter’s need to protect and help heal him too. However, the taste of life she has while mingling with others encourages her to develop her own needs and wants, exactly what you would expect from a growing teenager. It’s in these minute intricate details that bring to mind Viggo Mortensen in Captain Fantastic. The need for a father to keep his children close after the death of their mother will living, severed from society rings overly familiar. It’s in those moments, when something ultimately has to break, that Granik goes in for the gut punch.

Leave No Trace taps into the gut-wrenching possibilities of the kindness of humanity; it is delicately compelling and intricately detailed. Both Foster and McKenzie give a chemistry infused, flawless and emotionally dynamic performance.

Leave No Trace is out in cinemas June 29th