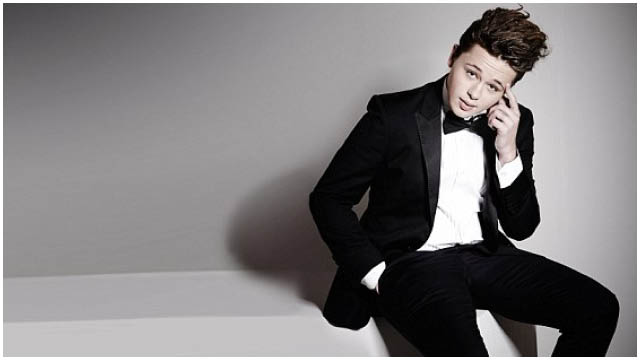 Luke Friend who you may remember from The X Factor, coming third place in 2013, Luke is now selling out tours and travelling around the UK. I caught up with Luke after his performance at Music Cube.

I always slam the car door, I bite my nails I also have the tendency to wear clothes that are too small for me but I would say slamming the car door because you know when I have arrived

What was it like performing in the Music Cube and would you do it again?

Performing in the music cube was really strange at first; we cheated a little bit because we could hear the audience in the breaks so I could tell what they were saying. I did actually change my set, I wasn’t going to do Skinny love and then I did because I heard the audience say what they wanted to hear, yeah I thought it was a weird experience as I have never done it so it was like a first class busking session, imagine if your going on a train and you went first class that what this was, I would definitely do it again, I would do it again now.

You started busking from an early age; did you always have that dream of performing in front of thousands of people? And when you did what emotions were going through your head?

Yes from the age of eight as I was quite shy up to then, I was always the kid who put his pants on his head and ran around the house naked but that was just me I was a weird guy, but I’ve always wanted to perform from the age of eight, I went performing arts, I did ballet then I went on to do music then from the age of thirteen I started busking and it just carried on, the emotions that were going through my head when it finally happened was unreal, I was very protective with my songs, I was nervous whether people liked my songs, I found it hard when I got criticism but I learnt how to deal with that and improve.

Have you found yourself approaching music differently now your doing it as a proper career?

Occasionally, its easy to lose your way, things get bigger and better, its easy to lose your way and forget what you were doing in the first place and I think that happened to me once about a year ago, I was writing I wasn’t in a good place but then I got in a better place, I started writing with people. I wanted to write things I wanted to do and this year I get to write with John Newman so its pretty cool, hopefully James Morrison as well, its all in the pipeline and I might be doing some stuff abroad as well.

On the X factor you performed with Ellie Goulding, if you could pick anyone else to duet with, who would it be?

I would duet with The Weeknd I do love a dread power thing, we could make a song called dread power, get loads of people with dreads up on the stage. My favourite song is I can’t feel my face and I also like his older stuff.

You went on tour with the Vamps, How was it?

I did I was sick to death of them, no I only joking, I loved playing at the o2, I’ve played there a couple of times now, its so surreal every time you play there its never different, your always nervous before you go on whatever anyone says, I think you never get use to it, it’s a amazing experience and if anyone was able to do it I would say go for it, as it’s a once in a lifetime opportunity and I am very lucky I managed to play there.

Who is your biggest music influence?

I would say Pearl Jam, I’ve always been a massive fan of Pearl Jam and I always will be.

What advice would you give to someone who wants a career like yours?

I would say make sure your ready for everything because it can kick off at anytime.

I always slam the car door, I bite my nails I also have the tendency to wear clothes that are too small for me but I would say slamming the car door because you know when I have arrived.

What has been your most embarrassing moment?

I ripped my jeans and my private parts were hanging out, No it was just my pants.

Do you have anything else coming up this year?

I’m going to be a vampire for a while and start some writing in the studio and hopefully bring out the album soon I’m also going to be working abroad quite shortly, so that might slow down things with the album but please be patient it will be out soon, there will some exciting things on it.