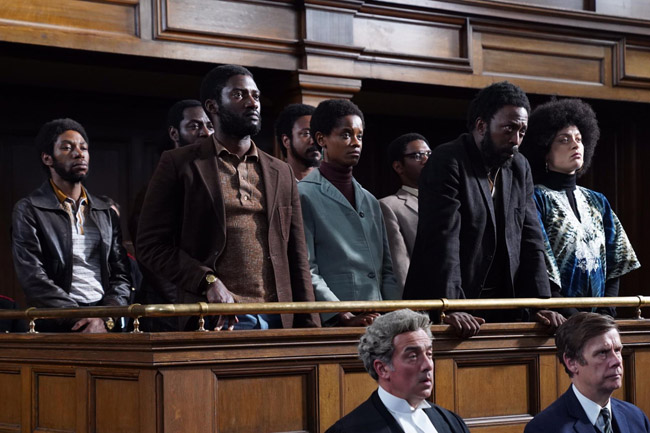 Steve McQueen kicks of his Small Axe Anthology with a whirlwind force of nature, a poignant, eloquent and electrically charged hotbed of British stark reality of racial tension.

As the hotbed of racial tensions bubble over in the US and UK, filmmaker Steve McQueen’s first feature in the Small Axe anthology – which consists of five films – couldn’t feel timelier. It may be set in 1968 but 50 years on, not much has really changed, and the oppressor is adamant on making a bold-faced comeback.

The London Film Festival opener is based on the true story of Frank Crichlow (Shaun Parkes), a Notting Hill resident and proud West Indian ladies man and owner of the Mangrove Restaurant. A restaurant that opens its doors to the community, not only just a hangout joint for his gambling buddies but also the British leg of the Black Panther movement. The major issue with this is, the local police force, lead by the venomous PC Frank Pulley (Sam Spruell), is not only inherently and vehemently racist but they use these excuses to raid and violently wreck the restaurant on a weekly basis.

There finally comes a time when Frank alongside the leader of the British Black Panther Movement Altheia Jones-LeCointe (Letitia Wright), and activist Darcus Howe (Malachi Kirby) say enough is enough and take to the streets in a peaceful protest in 1970, only to be met by police aggression and incitement to violence leading to Frank, Altheia, Darcus and 6 others to be wrongly arrested and charged with incitement to riot and affray.

McQueen uses the streets and its events to connect with the audience on an emotional level, riling up the anger and total despair at the corrupt and vigilantly like treatment of the black community at the hands of the establishment. There are moments of clarity and calm with shots straight out of a coffee table photo book, from knocked over kitchen equipment to the development of the streets of Notting Hill over the years. When it comes to the courtroom, and the Mangrove 9 begin to face trial, the intelligence, eloquence and sure-fire tenacity from the defendants run rings around the bumbling fools who trip over their own deceit.

Wright shows exactly way she is a fierce force to be reckoned with and only just keeps getting better as her roles evolve. In this role of the Black Panther’s Altheia Jones-LeCointe, she throws everything she has into it and explodes with almighty passion as she refuses to let a white man defend her in court and defends herself. This story feels almightily personal for her in her portrayal and that connection with her character makes it even more poignantly effective, the same can be said of Malachi Kirby’s Darcus as he lets his anger turn into passionate truth in defending his own name.

This gloriously zealous retelling of a significant juncture in British race relations history is the stark reality of the UK’s own struggle with racism and a reminder that it still remains to this day. McQueen, as always, keeps on proving how eloquent his storytelling remains even in the face of adversity.

Mangrove is part of the Small Axe anthology and will air on the BBC later this year.