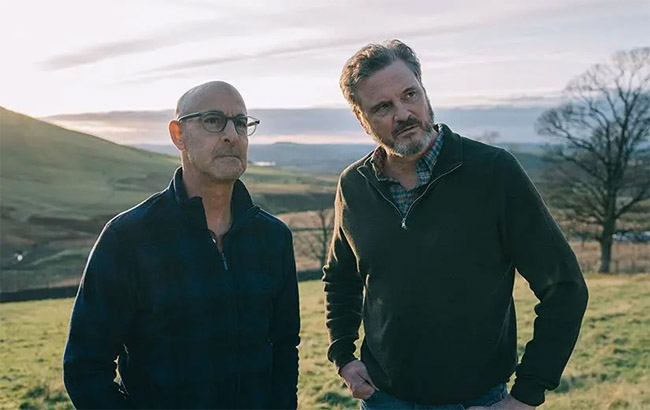 British director, Harry MacQueen has melancholy on point, first with Hinterland, now with a beautiful and tender love story in which dementia dictates the rules and unearths truly flawless performances from both its leading men.

The film follows Sam (Colin Firth) and Tusker (Stanley Tucci) as they take a road trip in their cosy little campervan over the visually stunning landscapes of the Lake District on their way to Sam’s piano recital. Just like any normal couple, Tusker switches off to Sam’s complaining as they bicker over whether map reading or a Sat Nav that sounds like “Margaret Fucking Thatcher” is the better option in finding their way to an idyllic lakeside spot. It’s not until one moment when Tusker wonders off we begin to see the fear unfold in Sam when he finds Tusker dazed and confused, witnessing his dementia decline begin to really start to take a hold over the man he loves so dearly.

With a family and friends reunion in full swing, the reality of this dilapidating illness kicks in for both men, for Tusker it’s the fear of becoming someone and something completely different to who he is and for Sam, it’s the same fear but with the added despair of having to watch the person, he loves deteriorate in front of his very eyes.

MacQueen has been clever enough not to make this a clichéd tear-jerker, but the compassion and respect for the storyline and its outcome is a real choker. The importance of this fated love story is made all the more urgent without the overcrowding of other characters, filtering out the noise of distraction gives not only the plot time to breathe and germinate but gives both Firth and Tucci their time to shine.

Both Firth and Tucci give emotionally connected performances as Sam and Tusker. The authenticity of their love for each other and anguish over this illness is so deep-rooted in reality is not only faultless but they both make it seem so effortlessly real.

It’s a rarity to find not only a love story but one steeped in real-life issues not to come with all the bells and whistles of the formulaic mush. MacQueen, Firth and Tucci have done this story a major service in depicting those dealing with the same heartbreaking issues and decisions.

Supernova will be released in UK cinemas on Friday 20th November.