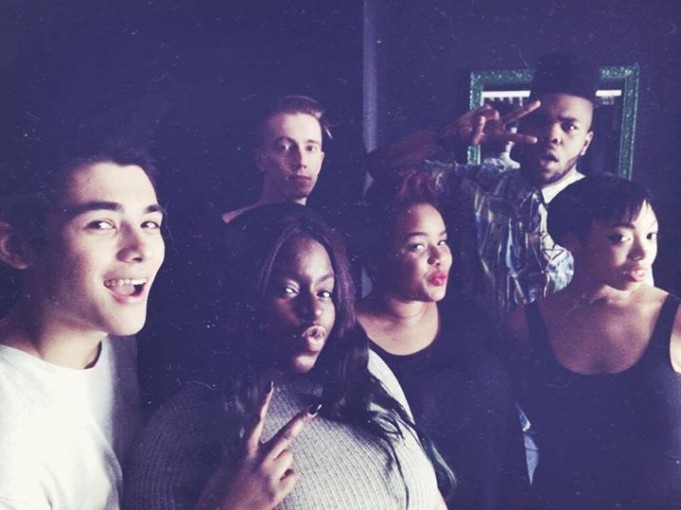 I recently had the chance to sit down with one of the UK’s hottest producer / writers at the moment, at only 19 he’s already a Grammy Award Nominee with production, writing and featured credits on 6 UK top 10 singles (half of them #1s) for artists like Little Mix & Duke Dumont. But today is all about MNEK the pop star, and I’m here to see him perform songs from his forthcoming debut album in a stripped down form for an intimate audience at the Spotify offices in London.

MNEK is not your typical pop star, for a start he doesn’t fit that cookie-cutter image of the current wave of boybands (6packs & swishy hair) nor does his music fit into the Adele / Sam Smith pocket of pop where people proudly declare that looks don’t matter when you’re singing piano led ballads. But MNEK is here to stay, and I’m very proud that he’s coming into his own, carving out this very strong quirky identity through a mix of traditional African inspired clothes and 90s swagger. At a time when afrobeat is enjoying a little limelight in the charts it would be too easy for an artist like MNEK to switch up his sound and satisfy the mass market, yet he’s not doing that. At 19 years old he seems to have a firm grasp on the kind of music he wants to make, and the kind of artist he wants to be. His music is hard to stick into a genre, sometimes it’s squelchy bass over a smacking snare with layers of rhythmic vocal samples that reveal themselves on the 100th listen… other times it can be this super laid back 90s R’n’B groove with sweet harmonies and fluttering flute arrangements. “Do you fuck to this shit?” Cause I sure as hell do!

When we meet for our interview MNEK is confident but not cocky, he’s friendly but not overly familiar. He takes his time to consider each question carefully but his answers are honest and there is a lot of laughter.

I think it’s great that we have you as a popstar, and I think there’s a need for better role models out there especially for big guys like us *high fives me* how do you feel about being a “bigger” popstar and how you style that? Is weight important to you?

We kind of have those days you know? I’m constantly in the gym, I’m constantly watch what I’m eating, but at the end of the day I just want to be healthy. I’m happy to be a big guy of course. There are some days when I’m like actually I’d rather not be *laughs* I’d actually rather not be this big but I love it and I love that it’s my thing, and I get to have fun with it.

Do the comments hurt you? After the MOBO awards performance you’d posted that someone said you had a big booty…

They do, I’d be stupid to say that they don’t but at the end of the day I think it’s about channeling the way that you see it, you can see it as a positive thing, so I’m learning everyday to see my size and my self-confidence and a positive thing.

I see it as a positive thing! Thank you! I’m watching and I’m like “go on! yeah!” *laughs* and “wow! where did he get that? that looks like it would suite me!” There you go! it’s Jekkah!

Is there an item of clothing you wouldn’t dare to wear in public?

That I wear in private? *long pause* No! I don’t know? I don’t own a jockstrap! *laughs* So I’m alright in that sense, I’d never leave the house in it! But it’s cool, If one day I’m not feeling it and I’m wearing jogging bottoms and a dirty t-shirt, it is what it is, I’d just wear it.

What’s your most treasured possession?

Currently, the key [around his neck]. I can’t leave the house without it. I’d flip out if I couldn’t find it, it’s become a part of me.

Would you cancel a show over it?

NO, that’s being dramatic! It’s not a superstition, it’s just something I love to have around my neck

What is your wildest ambition?

How do you see yourself in 30 years time?

30? Happy… in a family in a big house. Living of off everything I’ve done in the last 30 years? *laughs* Being generally content and not feeling I have to prove anything, I think that’s my goal, where it’s not that I need to prove anything but I want to prove something.

Do you go to church?

When I was a kid I was an altar boy actually! Every Sunday me and my brother were both altar boys we would hold the candles and go up there and back, we had the whole routine down… I hated it.

How does it feel to have a name like Uzoechi?
I love it! I was having this conversation with someone the other day, my parents never gave an English name, my full name is Uzoechi Ossosiomo Emenike, it’s full Nigerian, I’ve got 2 Nigerian parents, it’s where I’m from. Obviously I’d say I’m from Nigerian descent, I’d never say I’m Nigerian because it’s not fact. But when I was at school at lot of my Nigerian friends or African friends had English names or were given that so it would be easier for you know… “Joe” to know their name. But it’s taken me a long time to really be at peace with my names, with my aliases and with the fact that I am of Nigerian descent, and that I’m proud of it and I would never try to go under “Joe” or “Timothy” *laughs* I’m Uzoechi, I’m Uzo, I’m Emenike, that’s who I am.

What would you do if you could be invisible for a day?
That’s a tricky one…. I think I would *long thoughtful pause* rip everyone’s clothes off! I think I would literally run around… because I’m invisible…. and like…. *makes a gesture like snatching clothes off a washing line with a whoosh sound effect* and they wouldn’t understand what’s going on, I find that quite humorous, I’d be giggling in the corner like “hee hee” and they wouldn’t know a thing! Generally I’m not a mischievous person but I think something like that would give me leeway to do that.

Have you ever cried yourself to sleep?
*Very long pause* I’m gonna say yes… and this was when I was a kid, for being naughty or something.

Cause you got caught?

Exactly! There you go. *laughs* But I haven’t cried in about 6 years… weird right? I only cry when I’m yawning, like a deep yawn? you know… like yawn tears?

That doesn’t count! But yawning and tears… crying yourself to sleep, there might be something to that…

Your Mum’s House… not YOUR Mum’s house, it’s a club night at The Nest (in Dalston) every Thursday.

Who does your laundry?
My Mum.

Are you like Tinie Tempah where you have so many clothes you keep some at your aunt’s house?

I keep them at my studio! *laughs* Because I can’t be arsed to carry all the clothes home that I’ve been given over the past year. There’s a big pile of clothes there, if you came to my studio you’d see nuff clothes, like stage outfits, gym wear, jumpers… like a walk-in closet? this is it! Across town Basically.