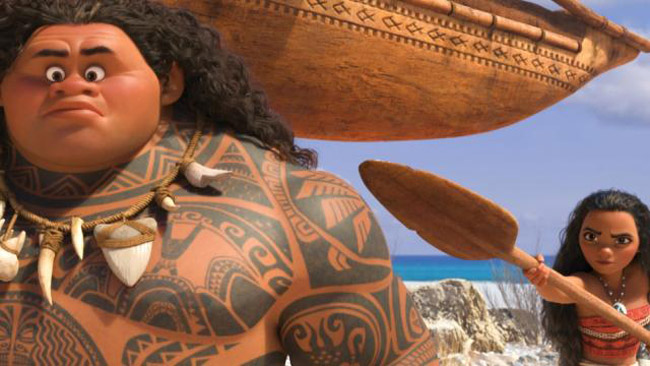 Disney seems to have struck gold with the diverse and empowering Moana, shining a light not only on Polynesian culture but also portraying its female protagonist as a feisty, adventurous and inquisitive girl that doesn’t fall under the stereotypical princess persona.

Who better to capture the Disney magic than veteran  legendary directors John Musker and Ron Clements, the men behind The Princess and the Frog and The Little Mermaid, who, on their travels to the Islands of the Pacific felt nothing but inspired by the people and the folklore of the region. This is shown ten-fold in its respectful representation of the little-known culture with heart-warming CG-animation that will warm the coldest of hearts as you find yourselves fully immersed in their vibrant world.

Disney always have a habit of also producing some of the finest catchy songs that refuse to go away and Moana is no different, with the man behind Hamilton, Lin-Manuel-Miranda, at the helm along with Mark Mancina and Samoan Songwriter and producer Opetaia Foa’i a mix of both poptastic and native ear-worming glorious tunes in the form of the Bowie-esq ‘Shiny’ song by a giant crab and Moana’s fiercely inspiring How Far I Go as the studio’s new Let It Go.

Moana, voiced by newcomer Auli’i Cravalho – who has an uncanny resemblance to her character – always felt an affinity with the sea. From listening to the mythological tales from her equally feisty beloved grandmother as an adorable baby through to her teenage years when she learns her people where voyagers many years ago. However, the strong-willed Moana is forbidden from the sea by her righteous and staunch father and Island Chief Tui (Temuera Morrison) forcing Moana to take the initiative when the only hope for the Island’s threatened habitat is in her hands with a crystal she has in her possession. Now a special mention has to go to one of Moana’s pets, yes she has an adorable pig but the scene-stealing Hei Hei the eye-rolling stupid rooster brings so many light reliefs as he accidentally stows away on her canoe.

Of course Moana is on a mission, a mission to find the arrogant yet ever so lovable shape-shifting Demi-God Maui who has an ego the size of Mount Everest – voiced by the man who can do no wrong with such excellent comic timing, Dwayne Johnson who is the only person who can help to restore her dying land. Their meeting is far from plain sailing as the pair squabble over most things including her refusal to be addressed as a princess and his assumption she is a fan. The charming humour is such a feel good warmer “when using a bird to write it’s called tweeting”. The vibrant and breathtaking CG animation explodes so effortlessly, during Maui’s own little ditty ‘You’re Welcome’ even his more traditional drawn tattoos come alive, tattoos that later on act as his conscience.

If action is what you’re after that comes in the form of a battle scene on the sea’s with an abundance of Sprites or otherwise known as coconuts, these scary yet hilarious pesky things are nimble and quick and provide some of the best moments in the film in their ominous battleships.

There is no denying why Disney is the best in the game with their technically sharp animation which simply pops off the screen but also seems so real and effortless in its striking presentation. The one thing the studio has got right in 2016 is its need to be different, first with Zootropia now with a Disney Princess that is culturally diverse, fierce and pretty bad ass with no sign of a love interest to send the girl into meltdown.

Moana is in cinemas December 2nd.