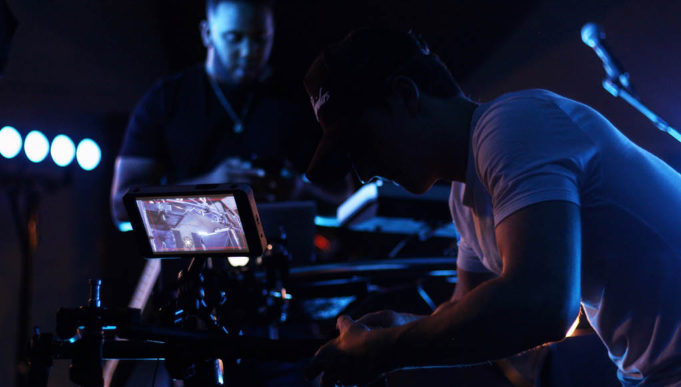 Lewis Andrews is not your average film director. No, not in the slightest. I always get a bit passionate when I see a young person go above and beyond his job title in order to be the greatest and Lewis is one of those people.

Age ain’t nothing but a number and Lewis currently 21 years old has already started to make waves in the filmmaking industry. From building spaceships with cardboard tubes at the age of 7 to owning his own film production company Wonderfilm Pictures. I spoke with Lewis about his journey so far.

I heard that the first movie you ever made was a horror movie with your dad. What was that like?

Yes, in hindsight this the horror movie I made with my father when I was 15 years old was probably the most important film I have ever made to date. I created this particular horror film in my home living room. Family is really important to me and my father is an important figure in my life. Both my parents motivated me always to pursue my craft. I had a burst of desire to create this short horror film and that’s where I started to break it down in my head logistically. How can I execute the artistic effect of this? Who can I use as the main role? Where can I shoot it? This way of thinking is how I still think now: the weighing up of time, resource, and budget. From writing the concept down to organising the details, I ended up creating this film start to finish in less than a month.

For the film, I masked the windows in my living room to make it dark. I had filmed my friends on their scooters on the streets and took lots of tests on my camera.  This was the first movie styled piece I ever tried. I began to piece together with my dad (on the fly) what I wanted him to do and what expressions to portray (the first time I directed I guess). My mother played the demon-like figure who appears in front of the projector.

Originally, the movie was four minutes long but I cut it right down as I learnt more about editing. This was the most amateur piece I’ve ever produced as it was my first but I am still proud of it. I think the lighting turned out well, and I still don’t know how I achieved this on just a DSLR camera with virtually no camera noise. On a technical note – my first proper camera was a DSLR – the Canon EOS 7D. I earnt enough money from selling a neighbour’s model aircrafts on eBay to buy a Wide-Angle Zoom Lens – Canon EF – 17-40mm – F/4.0 and my dad bought me the camera body. Even now, this is still a very good camera.  I was very particular on the specification and had watched a lot of test clips on YouTube. Right from the beginning, I had my eyes on the RED cameras (and I still do).

What’s your favourite genre of film?

I don’t really have a favourite genre as such. A genre for me translates to ‘too general’. When I have time, I choose to watch films based on only a couple of things: Recommendation and intuitive choices based on my nostalgia. I would say I am naturally drawn to science fictions, horrors and comedies, but I couldn’t favour just one. I rate movies based on how they make me feel. If I think about the movie the next day, I believe it succeeded. I like leaving a film and wondering about it. My favourite movie showing experience so far has been 4DX, and I think this way of viewing a movie has changed our cinema viewing experience forever. You’ve got a pretty impressive body of work for a young director, did you ever imagine getting this far, 2 years ago?

I dreamed of getting big brands and think anything is possible so when I booked a few brands like Nike, Puma, Sony, Vogue, I was happy. I have always believed that if you continually work on something, you will eventually get the payoff that you hoped for. My constant worrying and what I can do next to better myself keeps me one step ahead.

What makes your videos stand out from the crowd in the industry?

Most recently, X Factor contestant Ebru Ellis and her management Goshen Music gave me the freedom to develop, conceptualize, direct, film and edit the entire music video of her “Blocks” track which just launched a couple weeks ago.

From the get-go, the creation of Blocks was a gruelling and detail-focused project. The whole production was condensed into just 7 days: 5 days of pre-production, planning and logistics and just 2 days for filming across 4 locations in London (and an additional 4 spaces as a Plan B on backup just in case anything fell through) whilst I had to sleep on location. The RED Weapon Helium 8K camera was used to capture the music video scene by scene.

With a 19-page treatment for their London film strategy all developed on a business trip in Dubai, I wanted to make Ebru stand-out in an unpretentious yet magical way. Like Ebru lighting up grey blocks with colour by the touch of her fingers and speaking one of Simon Cowell’s unkindest lines “Is there something about her that makes her forgettable” within the music video, it actually created the opposite effect and has made Ebru Ellis memorable in just that one genius second.

Incorporating awe-inspiring moments with a hint of the supernatural into regular every day places like an Airbnb apartment, a gym, a red brick side street in Hampstead, and a high-rise office, the film concept is cleverly curated to maintain that cool factor whilst letting my intrigue into the world of cinema shine through.

I had two older professional men approach me as investors in my film company when I was 17 years old. I was super excited and trusted that they really would push my career forward with their belief in me. We set up a joint bank account and they bought camera equipment. Things didn’t end up as I hoped and they took all the money I made over a year out of the account and took the camera equipment they supposedly bought me. It was a learning experience on my part and it taught me to put up my guard when seemingly eager individuals want to do business with me.

The second moment was another man who approached me to film some star-studded A-list events on a huge level. This man never paid me for the two jobs I did and then left the country. You’ve been blessed with boyband looks, do you sometimes wish you were in front of the camera rather than behind?

Both my father and I love character actors and doing imitations. From being an avid observer and appreciator of the likes of Jim Carrey and Johnny Depp, I would secretly love to be in front of the camera at some point albeit my true passion is film.

If you could work with 2 people dead or alive, who would they be?

Michael Jackson because he had a huge impact on almost everyone and the world. Tom Cruise because I love so many of his films and know he produces big blockbusters.

If you got offered an unlimited budget to do any film. What would you produce?

A film I would create myself.

What are your plans for the future?

I would love to be able to be a respected feature film director with options to work on exciting ideas every day.

Who are your most inspirational directors and why?

Steven Spielberg – He has such effortless way of making his stories feel as real as possible, particularly portrayed in his science fiction films.  James Cameron – In Titanic, for example, his movie seems to have an effect on me every time with the way he presents tragedy and love together in the same story. Martin Scorsese works with really complicated, unique screenplays every time, with the likes of Hugo or Wolf of Wall Street.

In hindsight. What advice would you give to your 16-year old self about becoming a director?

If you were to take on an intern or working partner, what qualities would you look for?

OK, let’s have a bit of fun. Here are some quick-fire questions. Choose one option only…

Love Island or Towie? Neither

I look forward to following your journey and your progress, can I get a 1 min cameo appearance when you direct your first theatrical movie? Of course 😉