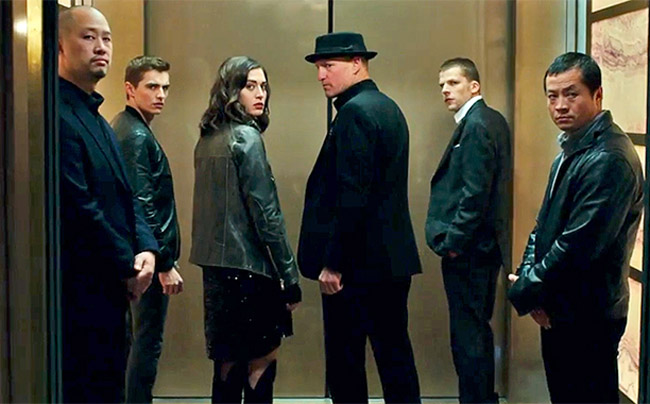 The four horsemen are back in Now You See Me 2 with a story that doesn’t fall far from the tree but with a copious amount of CGI which will boggle the mind and at a pace which feels like you’re in a speeding car.

There is nothing wrong with a few twists and turns, in fact, a good thriller is nothing without one. Now You See Me 2 has plenty which can be overwhelming yet not really surprising as the plot untangles. The CGI effects bamboozle with its rapid attempt to impress as we are taken on an international journey to China and London leaving the US as a distant memory. The Horsemen finally come out of hiding after putting Thaddeus Bradley (Morgan Freeman) behind bars. Still sought after by the FBI, The gang – missing Isla Fisher, whose absence is missed – return to the stage with its newest member and female representative, Lulu (Lizzy Caplan) only to find themselves set-up by a new addition, Walter Mabry (Daniel Radcliffe). Mabry, a tech genius, needs them in order to pull off an almost impossible heist, to steal a chip that can decrypt every computer in the world.

It’s the set-piece of this heist, that lets down the story, it may be slick and superbly choreographed but the manoeuvres go on for far too long and some moves are completely unnecessary and confusing., We witness close up moves of the chip – which is thin enough to fit onto the surface of a playing card – flying down arm sleeves and flicked with precision onto the next person as they are being searched. Along the way the horsemen are outwitted and outsmarted by stunts they really should have seen coming. One of which involves them being put to sleep, a trick in which they performed themselves in the first outing. We discover Merritt (Woody Harrelson) has a twin brother who has an even bigger ego than his brother. Harrelson and the rest of the cast execute their roles with superb precision as the Horsemen uncover each twist and turn they plot their own revenge for being duped by Mabry which sees a spectacular finale in London on New Year’s Eve involving a plane and the River Thames.

Newcomers  such as Director Jon M Chu is a surprising addition seeming as though his previous films include Jem and the Holograms, Step Up 2 and 3 and Justin Bieber’s Never Say Never but he brings a sharp eye, Whilst Caplan portrays a fun and quirky tone. Radcliffe also impresses in his villainous role, somewhat like a spoilt child. The issue with Now You See Me 2 is not the lack of imagination but a story that is far from original and it tries way too hard, like a child trying to win the approval of an unloving parent.

Now You See Me 2 is out in cinemas July 4th.