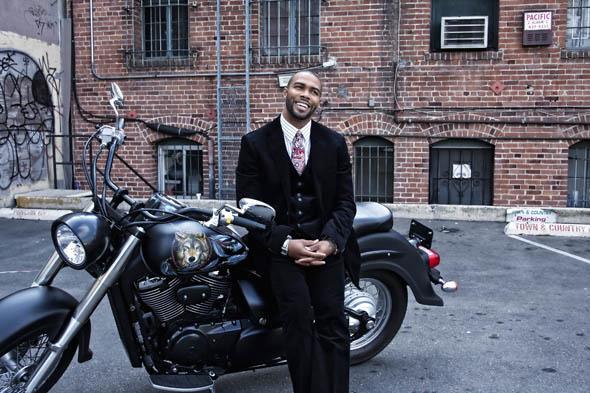 African-American actor Omari Hardwick is not only incredibly handsome, he is also extremely talented. Recent movie credits include The A-Team, Kick Ass alongside Nicholas Cage, and The Guardian opposite Kevin Costner just to name a few.

He also appears as a main character in US TV drama series Dark Blue where he plays talented undercover cop, Ty Curtis.
With his first name meaning ‘most high’ it’s not surprising that he was destined for success. Although he minored in theatre at college, he had a blossoming college football career and went on to play in the NFL for the San Diego Chargers. However, a knee injury cut his football career short but enabled him to return to his first love of acting.

He was so determined to make it in the competitive yet lucrative Hollywood film industry that at one point he lived out of his car whilst working two jobs to pay for acting classes. His hard work paid off because now he can be seen acting alongside Janet Jackson, in media mogul/director Tyler Perry’s new movie For Colored Girls Who Considered Suicide When the Rainbow’s Not Enough. It’s only a matter of time before British girls are swooning over the fast-rising hunk.

It’ not just the silver and big screen keeping him busy. He is also the co-founder of the Los Angeles Actors’ Lounge as well as running his own production company, Bravelife, with progressive plans to expand in the future. Flavour Magazine talked to Omari about, his dream acting role, character Ty Curtis, sex, women, and a whole lot more. What’s your earliest childhood memory and when did you first realise you wanted to become an actor?
My earliest childhood memory is riding my Donald Duck tricycle down the hill in Nashville, where I lived at the time. I must have been two years old. I realised I wanted to become an actor about two years later at four years old. I approached my mother about it; she said she knew of local classes in Atlanta where we then lived. My sights were always set on Hollywood – I ended up putting acting on the back burner for 20 years and focused on sports instead.

What do you most enjoy about your character role in Dark Blue?
This season, my character Ty is more interesting, not as introspective, more off-the-cuff in his decisions, maybe resulting in a more exciting Ty. He is fully committed to the job and he is not second guessing like he was in the first. His priority is not necessarily the juggle of husband and cop as much as it was in season one.

Is Ty similar to you in any way?
We are similar in some ways; I do find aspects of myself in the character. I always have to discover the flaws and the negative side of a character and then justify and validate why they are who they are, and why the flaws are there. Then I have to conclude where the character must end up. So, I do have to find some of myself in him, but we are not exactly the same!

What are your strengths and weaknesses?
My weakness and my strength are one and the same, and it is stubbornness.

What is your comfort zone when it comes to a character role, and where would you like to break barriers or expand on, if at all?
My comfort zone definitely expands wider than most of my competitors and in fact, this past year it stretched to a place that challenged me even further – when I took on the role of a dysfunctional, sexually confused hen-pecked husband, which could not be further from who I really am!

Describe your ideal day – and what is your favourite film?
An ideal day would consist of a home-cooked meal, a couple of beers while watching Cool Hand Luke starring the incredible Paul Newman, followed by Eddie Murphy’s Coming to America – a guaranteed way to end the day with nothing but laughter!

Tell us more about the moment when you saw your image on a billboard for the first time. After years of hard work and determination, how did it feel?
I felt vindicated in a sense. I saw the image of my grandfathers, my father, and my brothers on the same billboard. I felt proud, and finally understood God’s plan for me. As well as your acting career you also write poetry. What inspires you to write poems, and who is your biggest inspiration?
What inspires me to write my poetry is the state of America, the dysfunction of our country, and everything from walking through the projects of New York City, to walking through the projects of London. There are so many stories to tell through poems that others don’t have the voice or the gift to tell. I’m addicted to writing. As a writer my biggest inspiration would have to be painters – they inspire me.

If you were given the choice of any role for any film, which character would you most like to be and which film would you like to act in?
The character Santiago in the Paulo Coelho classic The Alchemist – it has been rumoured that this book will be adapted into a screenplay.

I personally remember you from Beauty Shop, as Byron. My friends and I loved your line ‘Why don’t you go braid your eyebrows or sum dude!?’ Did you enjoy your role?
First of all, thank you! I actually came up with that line in the initial table read; I guess your friends were not the only ones who liked it as it was added to the script! It was a fun cameo.

If you won an Oscar for a role in an epic blockbuster movie in the future, who would be the first person you thank during your speech?
God, who made it possible for me to have and be blessed with all the other people I would subsequently thank.

What advice would you give to those wanting to follow in your footsteps?
Be persistent, even in the midst of no pay and going hungry at times. Ninety per cent of folks around you will suggest to look for another line of work – you have to stay persistent.

Tell us about your role in Tyler Perry’s forthcoming movie Colored Girls?
I play Janet Jackson’s husband, who is a dysfunctional, sexually confused hen-pecked husband. The role was deep and challenging.

What’s it been like working with Janet Jackson and Tyler Perry?
It was a dream come true working with Janet. I did not focus on who she was when working with her, but of course when we wrapped I realised the company I was in. Tyler proved to be an extremely talented director, who was as generous as Janet and very challenging, which is everything an actor could want. I would love to work with them both again in the future.

This issue of Flavour Magazine is The Sex Issue, so the following questions are to do with that. Firstly, how do you feel about being a sex symbol?
It almost feels like a jab to all the girls who I liked when I was growing up and wouldn’t give me the time of day! And, it is sort of an homage paid to my ancestors for passing on appreciated genes! My grand folks were quite the sexy people. [Laughs]

What music puts you in the mood?
Everything from Marvin Gaye to Maxwell to even a sexy hip-hop track. No one puts me in the mood better than Sade.

What qualities do you look for in the opposite sex?
A sense of humour is a must, you have to be able to laugh at yourself; compassionate and passionate, spiritually connected to a higher power, sexy, which would include just enough high maintenance with the ability to also just kick back and watch a ball game with me.

Do you ever develop feelings for your co-stars?
I haven’t fallen victim to this yet!

Do you have to put in a lot of time at the gym to keep up with your physique?
Not as much as most – probably because of the time I spent as an athlete working out, and referring to the previous question – my gifted genes!

What would you say to chat up a girl?
Hello, I’m Omari, what’s your name? Can we talk?

Have you ever got in trouble with a girl over another woman?
Of course, I’m a guy! [Laughs]