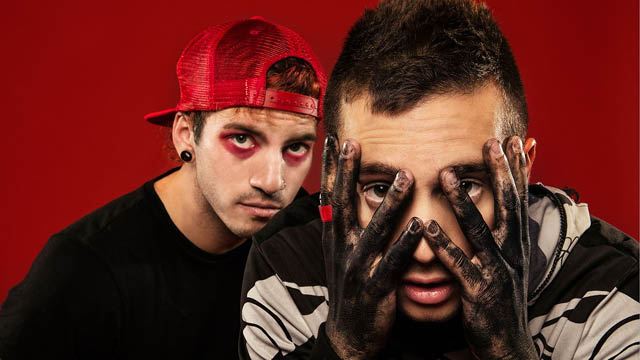 If you haven’t already, meet Twenty One Pilots – our leading band of 2016, who are dominating the globe right now. The sensational duo consists of front man Tyler Joseph and drummer Joshua Dun.

Twenty One Pilots are known for combining pouring their past problems onto paper and incorporating their instrumental talent, resulting in pure lyrical genius.

The track ‘Fairly Local’ see’s Tyler and Josh experimenting further into their dark and mysterious elements of sound, incorporating their well respected touching and sincere lyrics within a mist of indulging beat.

This song will leave you repeatedly dropping your head to each irresistible moments of climax within the song which is thoroughly enforced through Josh Dun’s fierce drumming skills. It portrays a deep and almost sad string of lyrics in genre which can only be defined as Twenty One Pilots.

‘Doubt’ is a deep and honest confession and plea for help. The song consists of a very electric vibe during the chorus ‘Don’t forget about me’ enforcing the plea, through the sketchy, and more importantly a memorable set of repetition. It continues to bring through the eerie sound which the duo consistently pull off so well to highlight the mystery of the problems that they are facing during their tracks.

The song itself, is very interesting from a musical and instrumental standpoint. The sensational duo continue to incorporate the mix of piano, with synth melodies and techno beats, along with Josh’s energetic and extremely impressive drumming skills that never fail to flow so well together.

Despite the song title, it isn’t truly about a genuine migraine that they have experience, instead it is more about what a migraine presents. More so, that they can be brought on when a problem in constantly flowing through your mine, how in the night, when you’re trying to sleep, you’re really lying wide awake due to thinking about questions only you can answer.

This song continues the mysterious genre of Twenty One Pilots, which gives them a cutting edge that no other artist presents within the industry, making them so much more intriguing for the general public. Despite this song being released back in 2012, we still believe this is one of their best still.

‘Holding on to You’ seems to portray the theme of ‘faith’ and attempting to have some control over overcoming depressive thoughts. The most important aspect of the song is where Tyler implies that people should be thinking for themselves rather than relying on other people’s views instead of their own mind. The beat of the song clearly presents the intensity of the issues that are being flooded to their audience.

‘Stressed Out’ is all about Twenty One Pilots striving to reconcile the innocent dreams and experiences of childhood with the consistent and irritable pressures of adulthood.

Despite the hard-hitting underlining theme of the track, it presents a very soft sounding anthem to the generation of today that indicates that they should base their thoughts on belief and not carry through negative and destructive mind sets.