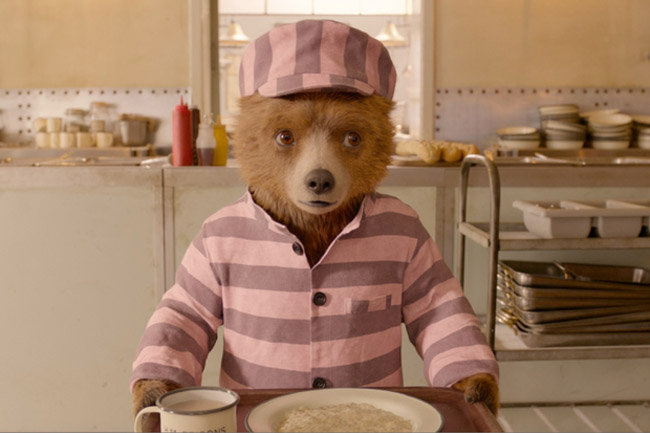 Those who absolutely adored 2014’s outing of Paddington’s big screen adventure have nothing to fear for the Marmalade loving Peruvian bear and his return in Paul King’s sequel, it’s doused in fun, warmth, charm and delicious animation. It has proven to be an ode to London and a loving tribute to Paddington creator Michael Bond.

With an underlying theme of happiness, acceptance and a willingness to help others, writer and director Paul King with his fellow writing team of Simon Farnaby and Jon Croker never stray away from the original creator’s vision of the character bringing a little bit of sunshine to a world darkened by its own negativity and self-entitlement.

Paddington is now firmly settled in the Brown’s family household but one person is still very much close to his heart, Aunt Lucy. With her impending birthday looming, Paddington finds the perfect present for the bear that took him in as a cub and treated him as her own, a gloriously nostalgic pop-up book of London.  The book is an integral part of this story and the filmmakers have highlighted this with beautiful perfection as the pages of the book come to life in animation form. However, things are never quite that simple for Paddington as he goes up against Hugh Grant’s dastardly villain Phoenix Buchannan who equally wants the book for his own selfish reasons.

This time around Hugh Bonneville’s Mr Brown is facing a little bit of a mid-life crisis, passed up for promotion at work to a younger man, he reminisces about his youth and starts to use male grooming products, Sally Hawkins, Mrs Brown is perfectly content in her little life and even Jonathan Brown has grown up, now wanting to be one of the boys takes on the persona of J-Dog. But its Hugh Grant’s colourful and wondrous take on the villain of the piece that steals the limelight from the Ben Whishaw voiced charming bear. Grant’s Buchannan, who has many disguises, is a washed up has been actor, relegated to dressing up as a dog for Dog food commercials and opening local fairs. Having recently moved into the same West London street as Paddington he learns of Paddington’s desire to buy the book, a book that for him could be his ticket to funding his own West End show.

Thanks to Buchannan, our lovable little tyke ends up in prison for something he didn’t do but soon makes new friends in the grumpy prison cook Knuckles McGinty (Brendan Gleeson) who helps to plan a daring escape to try and clear his name.

Kings production feels bigger than the first, wholly because of a bigger budget, with the inclusion of a steam train chase, the gleefully delightful fairground and of course the pop-up animation sequences. The picture is given a major boost with the vibrancy of colour and costume which makes the heart soar with cheerfulness and don’t be surprised if even the adults get that nagging choking at the back of the throat at its touching narrative. Its perfection on the big screen and a worthy sequel that many cannot boost that is better than the first.

Paddington 2 is out in cinemas November 10