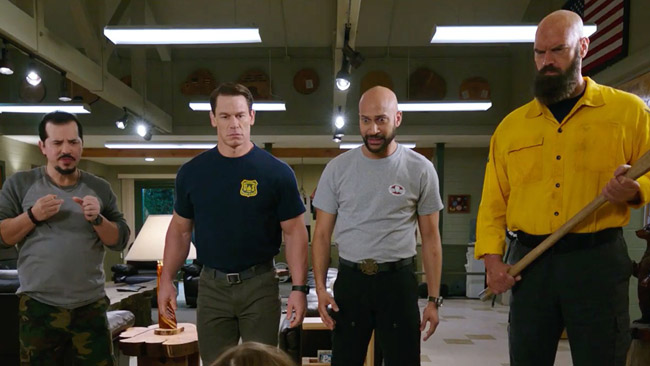 The physical comedy could be just the remedy to wash down all those Christmas leftovers, but let’s face it, it’s not going to burn the house down.

Pair a big tough ex-wrestler with a few mischievous kids together in a slapstick comedy and anyone would think you are on to a winner but there is no smoke without fire. John Cena’s attempt to follow in the footsteps of Dwayne Johnson hasn’t quite hit the mark, but for all its failings in comedy dialogue, the physical comedy could be just the remedy to wash down all those Christmas leftovers.

Set in the WildFire playground of California, Cena plays Jake Carson, a Smokejumper Superintendent who wants to make his dearly departed Dad proud with his methodical running of his station. Wanting to follow in his Pa’s footsteps the opportunity has come up to impress the big boss to take over the mantle of chief of all the Smokejumpers. For all his impressive skills as a Smokejumper, he is a pretty big failure at life. No idea how to date and just a slight disdain for kids, but it’s these two elements set his path to becoming a man with a human side.

The plot is filled with predictable paint by numbers moments when after rescuing three home alone kids, Brynn (Brianna Hildebrand), Will (Christian Convery) and Zoey (Finley Rose Slater) from a burning cabin in the woods, Jake and his depleted crew of the strong silent type with a surprising love of kids TV, Axe (Tyler Mane), the affectionate sensitive type Mark (Keegan-Michael Key) and the cheeky chappy Rodrigo (John Leguizamo) are forced to play babysitters – considering these are four grown men not a single one of them seems to have spent too much time around kids. Whilst three of the men and Jake’s dog seem to take to the kids like ducks to water, Jake is slightly less at home with the chaos.

The whole movie revolves around Cena and his many topless scenes and an extremely tiny my little pony t-shirt, we see him go from this man with a tough no-nonsense coating which only the kids can crack to a gooey melting pot of compassion. Key, we can only guess, his Jake’s right-hand man, always at his side like a loyal dog, always on hand with a box of tissues and he nails the thin comedy dialogue like only he could. Hildebrand and Convery are good enough at raising merry hell around the station, causing chaos and getting up to mischief behind their designated babysitter’s backs but it’s the baby of the three, Slater that will get hearts melting and taking control of the four grown men.

It hits all the right notes on the physical comedy as Cena gets thrown from pillar to post and he even gets his own little love interest in Dr. Amy Hicks (Judy Greer) who is roped in to help with looking after the kids because well, after all, she is a woman.  There is a lot of fun to had here but let’s face it, it’s not going to burn the house down.

Playing With Fire is out on December 26th