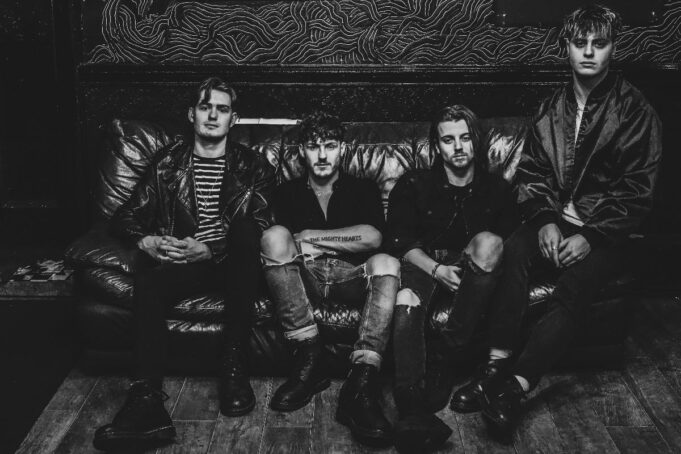 Milton Keynes based band Naked Next Door first came together three years ago when they were first seventeen. Made up of lead vocalist Euan Emerton, bassist Corin Schenks, drummer Callum Petchey and lead guitarist Tommy Woodward, they quickly became a band of brothers. With their vast sounding full-hearted songs brimming with gritty high-spiritedness, this has enabled them to rapidly grow their fan base and sell out hometown shows.

I chatted to Corin about the struggles of agreeing on a band name, new music and most embarrassing on-stage moments.

Corin – Euan was initially a solo singer who wanted to be part of a band – Paul (our manager) knew this and firstly scouted our drummer Callum, who he saw play at as the drummer for another band. They rehearsed together for a year or so but couldn’t progress as they still needed a bassist and a lead guitarist.

He then found Tommy and me who were also apart of another band and convinced us to join Callum and Euan. The first time we all met and rehearsed together was in November 2016.

It took a few rehearsals together to get warmed up to each other as we all have very different personalities and had never met before. However, once we got to know each other and saw how we all played everything started to fall into place very naturally. I’d say it took about 3 rehearsals to realise we all wanted the same thing.

Can you remember the moment when you knew you could be in this group together? Was it hard to think of a band name you could agree on?

Corin- The band name wasn’t easy to agree on – we all came up with a few suggestions however no one could agree – it took us 2 months to agree on a name until Euan told us a story, after hearing the story we all agreed with the name.

Your upcoming EP ‘Swerving Out Wide’ is set for release in May, What was the inspiration for these songs?

Corin- Lyrically the inspiration comes from the highs and the lows of going out with your friends and being young. Also, the journey of being in a relationship and how it can affect you.

Musically we draw inspiration from so many bands and it’s hard to specify a specific influence.

How do you usually go about writing your music? Do you write together or separately?

Corin- We have a couple of ways we have written songs. More often Euan will come up with a melody, chords and lyrics, bring it to rehearsals where he will play it to the band. We will then, individually, write our own parts. We will repeat and refine until we are all happy with how the song sounds.

Another way we have written a few songs is we will demo them as we are writing them.

What artist or band would you like to work with? Who has been your main inspiration when creating music?

Corin- As a collective, we all like Catfish and the Bottlemen and have drawn a lot of inspiration from them.

Euan is influenced strongly by Counting Crows and Kelly Jones from the Stereophonics when writing lyrics.

What has been your most memorable moment so far?

Corin- Our most memorable moment so far would be getting signed by Honest Records only after 1 year of being together as a band.

Have you ever had any embarrassing on-stage moments?

Corin- We’ve all had a few embarrassing moments – straps falling off guitars – pulling out leads on stage – being electrocuted – the list goes on, but we’ll stop it there.

What advice would you give to other artists creating their own paths?

Corin – The advice we would give other artists would be to keep motivated, there will be hurdles you need to overcome but don’t let it ruin your drive to perform and create music. Mostly just have fun with it.