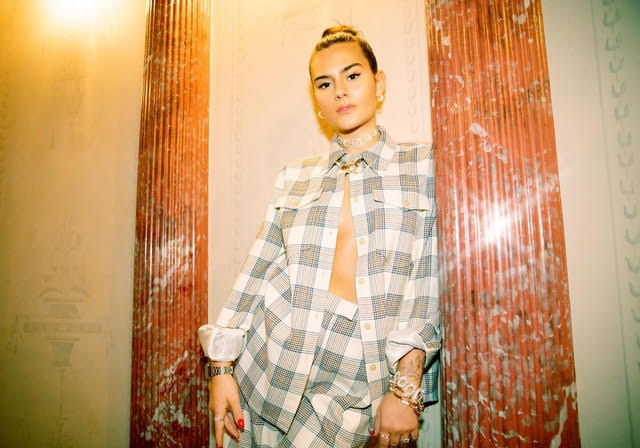 Following in the footsteps of great artists such as Zara Larsson and Tove Lo, SVEA is a fresh face and a new voice in the world of pop.

From supporting Irish band Picture This on their thirteen-date tour in the UK and Germany to perform at the prestigious Brilliant Minds event, Sweden’s rising songstress is back with new track ‘Numb‘.

We’re loving your new track ‘Numb’. What was the inspiration behind it?
Thank you! I love it too. It’s an uptempo track about going home with someone and spending the night together. We wanted it to be playful, conversational and sexy and that’s basically the inspiration behind it.
What’s your songwriting process like? Do you do anything to get into the zone’?
Usually, I’m in the studio together with a producer and another songwriter other than myself. We start off by talking about life and what’s been happening lately. Then we either start playing some chords on piano or guitar and vibe around that or the producer makes a beat. When we’ve got some melodies we start writing lyrics and it’s almost always based on something either I’ve experienced or someone I know has experienced. To get in the zone I like to listen to different songs before coming to the session just to have an idea of what type of song I wanna make. Usually, the sessions get super relaxed quickly and we can make jokes and dance a lot in-between the writing or recording.
Was there one moment where you knew music was something you wanted to pursue?
I used to have stage fright when I was younger so every time I had to perform I needed to rehearse weeks before just to be sure that I knew all the lyrics etc. I remember this one time in 8th grade when I had to go up and sing a song without having the time to rehearse and that was the first time I could really enjoy every second of it. After that, It didn’t take me long until I realized that music is what I wanna do for the rest of my life.
Describe your sound in three words?
Honest and personal pop music, usually with some sass!
You’ve opened for the likes of Picture This and Jess Glynne, is there one artist or band you’d love to tour with?
There’s so many I would love to go on tour with, but I think it would be such an experience to join Billie Eilish since she’s one of the biggest and youngest artists right now. Her music is amazing and she also seems to have incredible fans! I think I’m not only speaking for myself when I’m saying that she’s such a big inspiration.
Three things that would be in your tour survival kit?
Painkillers, headphones and chocolate!
If you could choose one artist to cover one of your tracks, who would it be?
I would love to hear Alicia Keys make a cover of my songs just cause she’s absolutely amazing and I’ve loved her music ever since I was a kid.
Who would be your dream collaboration?
Gosh, I have so many haha! But Kehlani, Rihanna or Tove Lo to name a few.
What’s next for you?
Right now nothing’s for certain since we’re facing a major crisis in the world and everyone has to stay at home due to Coronavirus. Trips and shows have been cancelled and we don’t know how long it’s gonna take until we’re back on track. The only thing I can do right now is to be in the studio, finishing up songs – which is exactly what I’m doing. Keeping calm. I’ll be releasing another EP later this year and hopefully, I’ll be able to go out and play it as well. I miss being on stage!