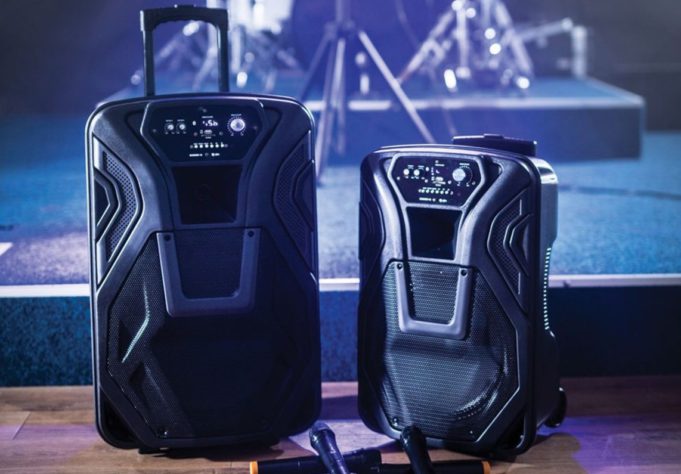 In my constant and never-ending search for a very loudspeaker, and not just loud, a heavy bass, portable and chargeable loudspeaker, I stumbled upon the QTX Busker-15 and I think I’m in love.

The QTX Busker-15 is a 15inch 100W portable Bluetooth speaker with all the trimmings and power you need to create hype at any given moment.

Weighing in at a measly 16kg (which is light for the size of this thing) the QTX Busker-15 is easy to transport as it has wheels and a trolley handle for easy pulling. It’s basically a similar size and weight of a fully loaded holiday suitcase. Plus you can always opt for the 12inch version if the 15inch is a bit too big for yah.

When I opened the box and saw the speaker, my face lit up and my smile became wider than the Joker in Batman. The futuristic-looking front design reminded me of the interior of a spaceship in an Alien movie. Sleek lines, curvy grill and a top panel with dials, buttons, knobs and USB / SD card inputs for ease of use. The QTX Busker-15 also comes with 2 microphones, remote control, batteries and of course a power plug (which would have been better if it was just a metre longer).

Then the moment came when I turned on the power. Without thinking I slipped a USB stick in the front panel fully loaded with my favourite tunes and within a few seconds, it had loaded and started playing. The front panel knobs and LED display lit up in luminous blue and right there it happened. Love at first sight. Now don’t get me wrong, this probably isn’t the loudest, most bassiest, portable speaker on the market, but the power to price ratio had me gobsmacked. You’ve probably guessed by now that I really like this speaker right? Damn straight. I stopped playing the music and walked over to the park immediately to see exactly what my new love can do, and boy oh boy did she rip.

It’s probably worth mentioning, that I’m the type of guy that organises impromptu BBQ’s, I’m that guy that messages my friends on a sunny day saying ‘let’s have a picnic in the park’, I’m that guy that has dreamt of a speaker loud enough to create a mini impromptu rave out of nowhere, so for me, the QTX Busker-15 is literally a godsend.

Fun thing to do with friends: If you buy a phono – 3.5mm mini jack cable, you can plug the cable in the back of the speaker and get all of your friends to bring their 3 favourite songs on their phones and everyone gets to hear a bit of their favourite music. This will save you from switching between Bluetooth connections and will add a bit of spice to any BBQ, picnic or event you may have in mind.

With up to 6 hours playback time from a full charge (I think I actually got 8 hours of play) the QTX Busker-15 effortlessly plays music non-stop at high levels. It’s the ultimate party starter and talking point, as all my friends that have seen and heard this speaker, now want one too… Even the women who initially laughed at my excitement of receiving my new boy-toy are now asking me where they can buy the 12-inch version from. Overall the QTX Busker-15 packs a punch as well as playing for hours on end plus, you’ll be the talk of the town when people see this speaker. Sound to price ratio on this model is great, it’s highly affordable, easy to use and managed and will deliver a sound that you and your friends (and some passers-by) will appreciate, time and time again. Just add sunshine, grass, friends and drinks and you will not need to go to any other events during the summer. Did I mention that it’s perfect for buskers too?

Buy the QTX Busker-15 on Amazon now, you can purchase this awesome speaker for less than £199

p.s. If you go to a park one day, and randomly hear loud music playing in the distance, don’t worry, it’s probably me and my QTX lol.