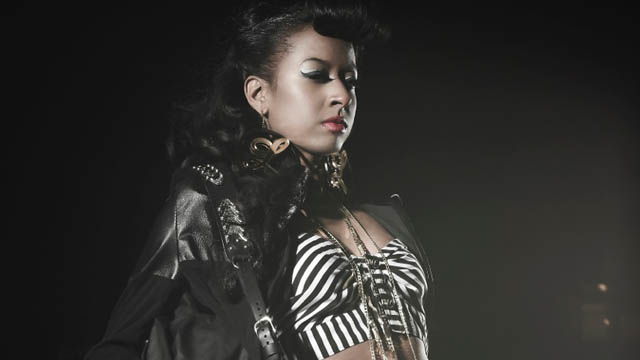 After bursting back onto the scene with her smash hit single “STOP”, Shystie is back and about to drop another killer track with “LET ME GO” that looks set to storm the charts. It’s already gaining major radio play on some of the national radio stations. We took a quick time out with Shystie for an interview to delve a little deeper into getting to know who she is.

It would appear you’re a woman of many talents, not only are you a rapper and songwriter but an actress too. You’ve had parts in the film Adulthood and the world’s first interactive TV series, Dub Plate, which aired on Channel 4 between 2005 and 2009. It looks like music however was where your career started, how did you fall into acting?
My manager asked if I wanted to have my own TV series, I said yes of course. So we met up with director n script writer Luke hyamms, I sat with him and told him my come up as SHYSTIE and he made that into the lead character, ‘Dionne’ and that’s how we created Dubplate drama.

Most people might think you’re a new up and coming artist off the back of your smash hit single STOP but you’ve actually been around the music scene for a number of years and released your debut album, Diamond in the Dirt back in 2004 under Polydor Records, Tell us exactly what you have been up to since the release of that album to the release of STOP.
I’ve been touring, acting, modelling, working on new material, and basically just building a killer brand.

You’ve had a number of your tracks feature in films and computer games and your track Arms Wide Open was actually the theme song for Adulthood, which you also starred in. Which came first your offer for the part of Lisa or being asked to write the theme song?
My role to play Lisa, then Noel asked if I could do the theme song and I got it done especially as I loved the film. You’ve grabbed the attention of some major players in the music industry and can proudly say you have supported Kendrick Lemar, 50 Cent, Basement Jaxx and The Streets on tour. How have you managed to perform on stage alongside these major artists and who was your favourite?
I practice hard and performing on stage is the best part of my job, so I always make sure I’m up to par and give the best show everytime. I really enjoyed them all, but maybe Basement Jaxx was my fave cos they were my first tour and the team taught me a lot.

I have to ask, your real name Chanelle Calica is a long way off your stage name. How did you come up with the name Shystie?
Just had that tag name in school \ sixth form as I was learning to emcee I needed a name so it just stuck with me.

I’ve also discovered you’ve been involved with some modelling, most notably at London Fashion week, you certainly have a diverse set of talents, which do you prefer?
Music is my first love, but modelling at LFW and NYC FW was amazing experiences that ill enjoy doing more of.

It’s obvious you have worked hard on your brand, have you any advice for any rising stars (especially women as we know how hard it is for women to succeed in the entertainment industry) that wish to follow in your footsteps?
Just get a strong team that believe in you and want to push you to your highest heights, and understand this isn’t overnight, I’ve been doing it for 10years. So it takes persistence and a real passion and love for this business because this industry is definitely not easy.

2015 is off to a flying start for you, not only do you have your follow up single to “STOP”, “LET ME GO” gaining some much deserved attention and support from the likes of DJ Target from BBC Radio 1xtra (including a spot on the 1xtra playlist), Ras Kwame on Capital Xtra along with numerous online platforms but last month saw the release of your crib session with Tim Westwood. What else can we expect from you in 2015? An album or tour maybe?
Ah thank you. This year ill be working towards and album and yes also my manager and team will be organising my first tour which I’m so excited about so lots to look forward to this year.

Like Shystie? You can find out how to date her here: How To Date Shystie.