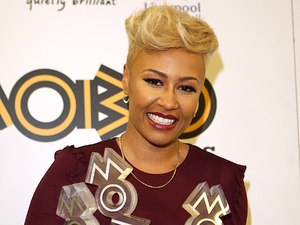 Emeli Sande was the name on everyone’s lips at the Mobos last night after bagging three awards.

The songbird won Best Female Act, Best Album and Best R&B/Soul Act. She also kicked off the show with a mind blowing performance of ‘My Kind Of Love’ from her debut album ‘Our Version of Events’, which is currently the UK’s best selling album of 2012.

Rapper turned-actor Plan B was the big winner in the Best Male Act and Best Hip Hop/Grime Act categories.

This year’s recognition for Outstanding Contribution to Music went to TLC’s T-Boz and Chilli, who flew in from the US and arrived at the event with new best friends Stooshe.

Holding her accolade, Rita said:”I’m absolutely thrilled. I’ve been involved with the Mobos since I was 15, it’s great to be back,” said Rita Ora.

Other winners also include JLS for Best Video for ‘Do You Feel What I Feel’, and Nicki Minaj for Best International Act.