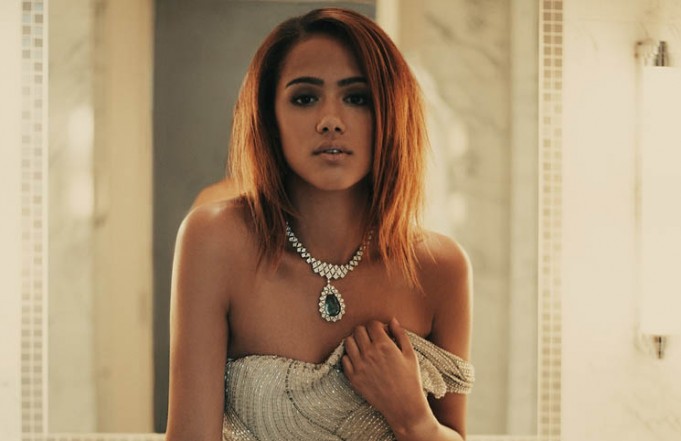 Nathalie Emmanuel seems to be popping up everywhere. The British born actress who if you have a really good memory like we do, would remember seeing her in Stars In their Eyes Kids, way back in 2002.

However it was her role in E4’s the misfits as Charlie is Episode 1 of season 3 that really made us start taking note of the English, Dominican, St Lucian stunner. Although her role wasn’t a big role in the show, there was that moment when she span around and showed us her beautiful buns which caused fans to create animated gifs (see below) that flooded the internet.

But wait, we have missed something, before the BUNS, Nathalie Emmanuel played Sasha Valentine in the hit UK TV series Hollyoaks. The last Who’s That Girl feature we done was Montana Manning who also starred in Hollyoaks and also was the featured girl in T.I. ft Iggy Azalea songs ‘No Mediocre‘ and the article hasn’t left our most viewed section since we posted it. Fast forward to 2013 and from Holly Oaks to Hollywood, Nathalie Emmanuel is making waves in the acting industry, playing Missandei who is Khaleesi (Emilia Clarke’s) right hand girl in the HBO smash hit TV series Game of Thrones. If you thought that was pretty spectacular, then hold back your excitement as you will be seeing her playing the role of internet hacker “Ramsey” alongside, Paul Walker (R.I.P), Dwayne Johnson, Michelle Rodriguez, Jordana Brewster, Tyrese Gibson, Chris “Ludacris” Bridges, Elsa Pataky, Lucas Black, Jason Statham, Djimon Hounsou and Vin Diesel in Fast and Furious 7, don’t believe us? Check out the trailer below.

1. She is a true beauty, that big curly hair, those eyes and lucious lips

1. She’s the girl next door that you didn’t realise she was so hot.

3. She hangs out with one of the hottest chicks on the planet Emily Ratajkowski, you can find out how to date Emily here

4. If she was your girlfriend you can easily introduce her to your parents

5. And when you take her on the red carpet she will look like this. Delicious.

6. We bet she’s a great kisser

And here is a stunning photo from here twitter account, looking awesome in her Hunger Magazine shoot

We also have news from Digital Spy stating that Nathalie, will be starring in The Maze Runner 2 Check out our exclusive interviews with the cast of The Maze Runner. We was going to end the article here, but we thought we may as well post one more photo of Nathalie Emmanuel for your viewing pleasure. Go on tell the truth, she’s hot right?