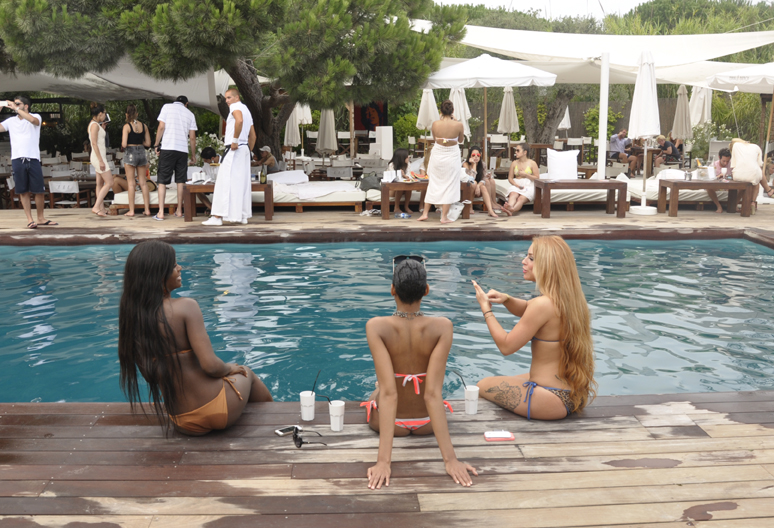 Saint Tropez, a little french fishing village and the most famous resort in Europe. Many of us here in the UK are bombarded with TV shows showing kids going crazy, binge drinking all over Spain and Greece so we at Flavour thought we’d take to the South of France, a short EasyJet, train, bus and boat away, to see how the elite get their rocks off and their party on. The image Saint Tropez conjures to many is luxury Yachts owned by the super rich, old man escorted by nubile beauties, smoking hot party girls being sprayed with Champagne at beach clubs and some of the most expensive and celebrity filled clubs in the world. To be fair to Saint Tropez didn’t disappoint, it was all these things in abundance. The women were stunning, like hanging out backstage at a Victoria Secrets fashion show, there were many old croonies on the arms of these women but equally as many beautiful young men working at the numerous bars, restaurants and beach clubs. But beware, before you are charmed into ordering a few drinks on a lounger at Nikki Beach, all this luxury comes with a hefty price tag. Day’s are spent lounging on the beach, you won’t see Sponge Bob beach towels littering the beach here, you take a seat on day bed or lounger at one of the many beach clubs (costing up to 30 euros each). The most famous are along Pampelonne Beach and include the famous Le Club 55 (elegant and sophisticate beachfront club) and Nikki Beach (set behind the beach with a younger and more clubby clientele). If you want to book lunch at either it’s wise to book in advance during high season, we dinned at the beach bar rather than the main restaurant at Club 55 which you didn’t need a booking for and serves delicious pasta’s and salads. You will be subject to a min spend at Nikki beach if you want a lounger, although you can hang at the bar and pool without the expense. Fashion, You will need four main looks, a day! Don’t think you can pop down to the local patisserie in shorts and a T.shirt, women in Saint Tropez and never caught slipping. Imagine you are RiRi and the paps are on you at all times and that’s how you must dress in Saint Topez. There is every designer boutique available in the main harbour, although with the poor exchange rate between the € and the £ Bond St may well be cheaper.  You like accessories? Then wear them all, you can’t be over done here, especially in the ocean, prove your watch is real by taking it for a salty dip. Clubs….I am going to confess I LOVED the clubs in Saint Tropez.  They don’t get busy till around 2am and remain open till 6am all week so be sure to get that disco nap in before you go.  They aint cheap but we’ve established this isn’t a place to try and count the pennies, a drink at the bar will cost between 15€-25€ although most of the drinking is done by the magnum on tables by rich kids, footballers and Europs clubbing elite.  Unlike in the UK clubs are actually free to get in to so check them all out to find your favourite spot.  Papagayo is probably the youngest club, where they wealthy children come to party.  They have lots of entertainment, live PA’s and a mixed music policy.  Club VIP is the hip hop, hot spot where you are likely to bump into JayZ and Bea after a tiring day on the Yacht, Tyga was performing while we were there as well as spotting the Inter Milan football team buying Crystal like there was about to be a drought.    Byblos hotel’s club Les Caves du Roy has a slightly older clientele, it’s pumping house music which stops for the MC to announce how much champagne is being delivered to the table.  I know it all sounds very pretentious and ostentatious and you probably don’t need more than a long weekend here, but it will be one you don’t forget.

Words and Pictures by Gaia Beck