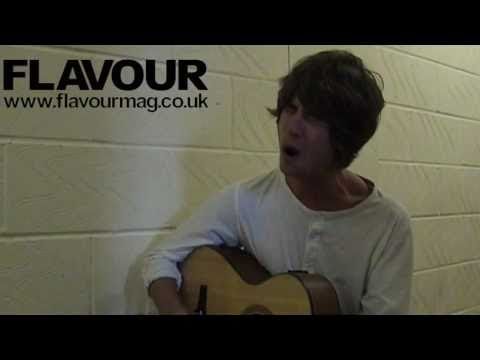 Sam Garrett is this year’s winner of the urban category at this year’s Live and Unsigned 2010 urban category. He was selected as the winner by Flavour Magazine – as we here at Flavour sponsored that section. And speaking personally, from the moment he stepped into Flavour HQ I could tell there was something a bit different about this 20-year-old musical marvel.

With his laid-back hippy charm and idea of spreading love and sunshine to all through music, talking to Sam is like taking a step back in time.

It’s clear that Sam has the same approach to life as he does to music. Live for the moment, don’t stress and above all just chill. It’s no surprise that Sam, who’s from a ‘little town in the middle of nowhere near Derby’, just sort of fell into music. ‘My dad used to be in a band and I used to root through all his vinyl and just go crazy.’ From there a great love affair was born and although Sam has played small local venues, he admits that the music industry is ‘pretty unknown’ to him with Live and Unsigned being the first big gig he’s played.

His biggest influences come from The Beatles, Bob Marley and the wonders of nature. ‘With those people you can tell that it’s real, you can hear it in their voice. A lot of artists today have been manufactured, they have good voices and stuff but it not coming from their heart.’

If there’s one thing that Sam’s not it’s manufactured. While playing us a rendition of his song Butterfly you could literally see jaws drop. Armed with his acoustic guitar and soulful voice he had people, not just from Flavour but other offices as well, jumping up from their desks to come and see where the mesmerising sound was coming from. Listening to him is like hearing a young Bob Marley; it’s amazing – there are no other words for it.

For him Live and Unsigned was just another random adventure. ‘I was searching the internet for unsigned festivals and that just popped up. It was only a tenner to sign up so I thought why not? I went to the audition, got through and it just sort of went from there.’

Live and Unsigned has provided Sam with the exposure he needs. ‘Certain people have seen me that wouldn’t have been able to see me before. A lot of people have been emailing me and stuff so things are definitely happening.’

As for the future, Sam intends to just keep doing what he’s been doing, playing at open mic nights and putting himself out there with his drummer and good friend Dan. They used to be in a reggae band together until it fizzled out. ‘Everyone started getting jobs and girlfriends and stuff and we couldn’t find the time to rehearse so that was it. But Dan’s wicked – he’s been playing with me ever since I was 16 and now we just jam.’

Whatever the future holds for Sam, as his idol Bob Marley would say, we’re pretty convinced here at Flavour that ‘everything’s gonna be alright’. He’s a free spirit and a real inspiration – coupled with the talent and personality he is sure to make it big if he decides that’s what he wants to do.