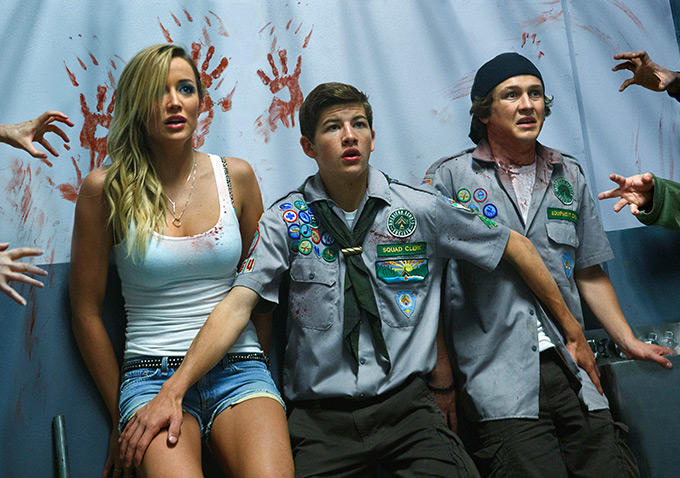 When you open up a film with a long haired janitor grinding his mop and bucket to Iggy Azalea’s Black Widow in a science lab it basically sets the tone for the whole film, the laughs certainly do not stop there.

When the janitor stumbles across an unconscious man in the lab, totally oblivious to his surroundings, he thinks he has touched something that has killed this man as he tries to resuscitate the dead man awakens and turns out to be a zombie as it chases him around the lab eventually catching up with him to infect him. In the meantime, we are introduced to Ben (Tye Sheridan), Carter (Logan Miller) and Augie (Joey Morgan) three nerdy scouts who have been best friends since the moment they joined the scouts many years ago. It’s the evening of the final camp out when Ben and Carter decide to abandon Augie in order to attend a party with the cool kids.

From here everything descends very quickly into the Zombie Apocalypse, it’s almost like being hit with a high-speed train. Carter and Ben Park up their car in the car park outside a strip club, Carter notices the bouncer is missing and this is their one chance of sneaking in to get a glimpse of the half naked strippers. The place is empty when a strange looking stripper comes out and starts her routine, Carter, who is a typical sex-obsessed teenage boy, is in his element until the stripper tries to eat him. Coming to his rescue is the very sexy Denise (Sarah Dumont) who happens to work there but has yet to be infected, by blowing her head off. As the three escape the club they encounter another group of zombies.

The stand out characteristic of the zombies in this film, which you won’t have seen before, is the speed these zombies move at. Gone is the stumbling, rocking from side to side as they walk. Oh yes, they still move like zombies but they seem to have had a rocket injected into their legs.

As the group learn that the army have evacuated the town and are getting ready to nuke the town so the Zombie plague doesn’t spread the group descend on a mission to save Carter’s sister (who Ben just so happens to have a major crush on). As they realise they have been duped and given the wrong address for the party they make their way back to Carter’s house to find his sisters diary for the address of the party.  One of the stand out funny moments has to be when a female zombie gets caught in a gate and her shirt rips off exposing her breasts, Carter just can’t help himself and has to go back and get a grope of her ample breasts. Everything about this film shouts you should hate it, but the script just flows so well and the comedy moments will have you crying with laughter, especially when we see Ben about to jump out of a window, Closely followed by a bunch of zombies as he falls out the window he grabs hold of something… yes it just so happens to be a zombie penis.

The story is nothing new and you can all guess the outcome of the film but it’s so entertaining, gruesomely funny and extremely crude it’s bound to be a bit of a cult classic.

Scouts Guide to the Zombie Apocalypse is out in cinemas 6th November.