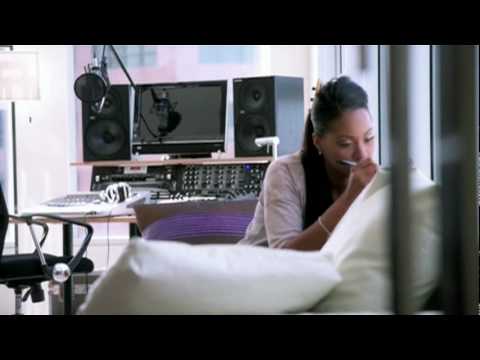 But the 24-year-old from Barbados is back with a new look and brand new material.

Impossible is the debut single from Shontelle’s upcoming album, No Gravity, out later this year.

In an exclusive interview with Flavour Magazine Shontelle revealed all – from the rumours surrounding a fling with her video co-star, ‘sexed-up’ music channels and celebrity love rats.

Who is the hunk in your new video?
The guy in the video is Steph Jones. Everyone’s asking me about him. I chose Steph because he is so hot. He’s really, really hot.

Is it true the two of you are now romantically linked?
Honestly, he reminds me of an ex-boyfriend so I was like, ‘let’s just keep this really real.’ It’s funny because Steph is actually Jordin Sparks’ ex-boyfriend. So people just sort of think, ‘OK, Steph dates hot female artists.’

I’m not dating Steph he’s just a good buddy and I knew he would be perfect for the video. He’s a model and great actor so I thought, ‘what more can I want.’ I think I’ll be making a lot of ladies happy with this video. He’s eye candy for us girls!

What’s the biggest lesson in love that you have learnt?
I’ve learnt that you just can’t force love. You fall in love with different attributes that people have but it takes a lot more to stay in love. You have to be compatible and it has to be natural. You have to be understanding of each other and sensitive to each other’s needs. There are times when that match just doesn’t really work. It sucks but that’s pretty much what ‘Impossible’ is about. Sometimes you find that love and you think you’ve overcome all of those things I have just mentioned. You think to yourself ‘Wow, I really did find the right person and I’m not letting him go. I’m done, this is it.’ Then out of the blue something strange happens and it hits you harder then anything and it’s a shock. ‘Impossible’ is about that specific type of situation.

Do you hideaway when you’re heartbroken?
I curl up in bed and listen to slow jams after a break up. I am so lame when I am heartbroken. I call my friends and say, ‘girls, I can’t take it!’ I’m such a mush. I hurt so badly because I love so hard. When it gets ripped from under my feet I’m so lame and I don’t want to go anywhere or do anything. It’s like ‘T-Shirt’; I lie in bed and don’t do anything for a while. When I put music out there I try to keep it true to myself and make sure it’s very reflective of me.

We’re forever seeing beautiful scantily dressed women draped over our favourite rap stars. Have music videos got ‘too sexy?’
It’s really difficult to break down sexy music videos because once upon a time there was no such thing as a bikini and to us we’re like, ‘whatever’. One time even the thought of wearing a thong was like, ‘Oh my gosh, where is the rest of your underwear?’ Now there are probably people who have never worn anything but a thong since they got out of school. Whenever something happens it’s shocking at first and then people become desensitised. There has to be a point where you draw the line. I won’t be one of those chicks who’s scantily dressed hanging off boys, you probably won’t see that in any of my videos either. The boys need their little dose of candy but at the same time you have to draw the line. I have two younger sisters so sometimes I think, ‘how would I feel if my little sister saw that?’ I have to set a good example. It’s very touchy.

Sports stars are making the headlines almost every day for their bedroom antics. Is infidelity an issue in the music world too?
I think it is. It doesn’t matter what spotlight you’re in. I think it’s more shocking when it happens with athletes. Athletes are portrayed by their management as decent guys. With athletes, it’s almost similar to the president, they always have their main lady, his wife or long term girlfriend and everyone knows who they are.

Musicians are sort of expected to be wild and crazy, especially rock stars. When they cheat I guess it’s not as shocking. Athletes are promoted as they clean cut, gentleman-like figures, especially if you play cricket or golf – no one at all expects you to be wild or crazy.

Who are the worst culprits for a sex scandal in the US?
Over here in the US, when basketball players do it – that’s not shocking. Basketball players have a reputation of being wild, cheating and having tons of girls and groupies around them all of the time.