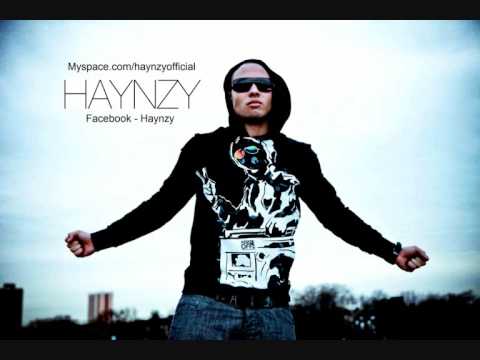 Talented singer Haynzy is set to take centre stage with his smooth R&B vocals. His debut single Fallin’ Alone was released last year and the video for the single had a great response. This star in the making now has a track out with reggae superstar Aidonia called Thinking ‘Bout Me’ that also saw Crazy Cousinz add a touch of magic to the remix enabling it to become a banger on the radio and in clubland. At a young age Haynzy was drawn to the sultry sounds of gospel and soul. At only eleven years old, he began singing lead in the Young Disciples Gospel Choir, which led to performing at a number of prestigious venues, such as the Royal Albert Hall, the Cabot and the Royal Festival Hall.

If all this hasn’t kept Haynzy busy enough – He is one of the faces of Action For Children and has been nominated for the converted Spirit of London Award, which saw him meeting Gordon Brown at Number 10 to discuss the youth of today’s involvement in music.

With 2010 set to be a busy year Haynzy took time out to talk to us.

Tell me about the track Thinking Bout Me?
Thinking about me’ is a straight club banger! About girls that just want to party alllll night allllll the time.. We noticed that when you go to a funky rave the dj plays a big bashment segment and when you go to a bashment rave they play a segment of funky tunes… and this is the first track to totally mix the two vibes and the music video is going to portray that in a big way!! So watch out for it trust me!! 😉

How did you hook up with Aidonia? How did Crazy Cousinz get involved?

The whole thing came about when we began talks with Crazy Cousinz about this project and the amazing ‘Inflation’ instrumental. They loved the idea of a proper song being written over there popular club instrumental and also love the bashment vs funky element that it brings. The rest is history really and I’ve really enjoyed the collaboration… Aidonia loves it as well and is promoting it in Jamaica!

Last years release Fallin’ Alone is a great R&B track that tells a story, where did the inspiration for the track come from?
I started seeing a girl and how we met influenced the track. The story elaborated from there to be something I felt everyone could relate to – new people coming into your life and when you fall for someone and they don’t fall for you, you’re falling alone! It started out with a true event in my life and grew into a love story.

Tell us about your debut album, what can we expect?
I want it to be a great album that tells a story, reflecting different emotions and catering for different needs. The style will include R&B and dance; it’s definitely one for the ladies! Look out for the album late 2009.

Who in the industry would you like to work with?
I’d really like to work with Chipmunk, Tinchy Stryder, Sway and Rodney Jenkins to name a few! They’re all very talented and would make great collaborations.

What do you think of the UK scene at the mo?
It’s doing great, it’s really picking up again and I think UK urban is the next big thing. With artists producing some great tracks, like Chipmunk, Taio Cruz, Sway and Ghetts the scene is getting bigger and better.

Who inspires you?
It’s got to be Brian McKnight, 112 and Boys II Men. They all have amazing vocals and understand what it takes to put real emotion in a track.

Apart from working on your album what other projects are you involved with?
I’m playing live and have various dates coming up across the UK, details can be found at http://www.myspace.com/haynzyofficial . I’m also appearing in my first movie “The Baseline” with a cameo role alongside Layer Cake and Hotel Babylon actor Dexter Fletcher which is really exciting, the movie release date is yet to be confirmed.

What’s been the highlight of your musical journey so far?
For me, its being invited over to the states to represent the UK for their independence day event and being nominated for a Spirit Of London Award for achievement with in music. I’ve loved all of the shows we’ve done in 2009 and am looking forward to 2010.

What can we expect from you in 2010?
2010 is a big year for me.. after releasing this single, I am releasing another in April with another really good feature! And then I am featuring on the next jammer single also!! We have lots of great singles and videos planned for the year and I’m really looking forward to seeing what peoples responses are to the tracks. I am also featuring in a couple of films that are being released this year, so all round there is a lot going on.

For more info on Haynzy visit his myspace, facebook and bebo profiles.