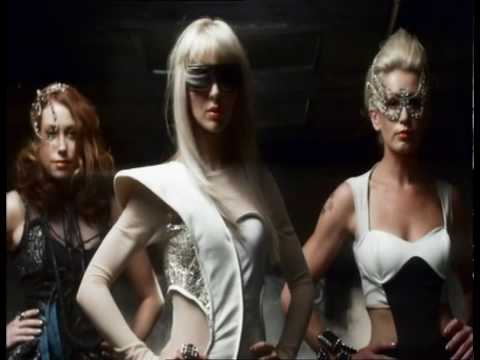 Before there was The Saturdays there was Girls Aloud, and before Girls Aloud there was Sirens. Introducing one of the UK’s best kept secret female girl group (up until now) the threesome Katherine Monaco, Karina Chambers and Lea Reynolds are gearing up to release their third album ‘3′. Since bursting onto to the scene in 2001, the Newcastle trio have gone from strength to strength, from achieving a top 10 hit on the American Billboard charts to even becoming bona fide stars in Japan as well as achieving a top fifty single ‘Baby (Off the Wall)’, in the UK charts. Fusing a very catchy pop sound, with a bit of RnB and slices of sexiness into their music, get ready to change your ringtone and replace your wallpapers with Sirens who are ready to takeover. We caught up with the girls to chat about their new single, staying in shape, their alleged feud with Shayne Ward and to play a game of snog, marry, date or avoid.

So after meeting and forming Sirens at the age of 17, you had to sell your cars in order to record demos. Would you say it’s all paid off?
Yeah, it has definitely paid off. Anybody who makes music knows how expensive it can be. At the time we had to prioritise and the demos we made gave us our record deal.

You girls have been around since 2001, why is it do you think the UK has not yet recognized you?
We really don’t know, maybe it’s because we’re not based in London or going out partying all the time as a lot of people are more known for partying than what they actually do. We also don’t class ourselves as celebrities, we are musicians and performers and that’s what we do. If we were down in London, all the time hanging on to footballer’s arms then, I reckon we would probably be a lot more famous.

You’re pretty well known in the US after achieving a top 10 single. A lot of artists dream of such recognition, but does it feel strange being well known abroad than at home?
Yeah, it feels so surreal because we remember a few times getting off a plane in Los Angeles, and there were paparazzi waiting for us. We are so proud of our achievements over in America, especially as our record just took off without much promotion, which was fantastic.

What do you think of other girl groups such as Sugababes, Spice Girls and Girls Aloud?
We love them all, and we also think they are great in their own rights. Besides that their music is very popular, but with us, we believe we’re quite different as we’re more performance based and above all our sound is a bit unique.

Tell us about your brand new single, Stilettos.
Well, it’s quite different from our last single as it’s a bit more dance and up-tempo. We didn’t go into the studio to make a pop record we just started recording the album and that turned out to be the road that we went down. Stilettos came to be the obvious choice for us to release as the first single, from the album as everyone kept pointing it out.

Your new album is called ‘3’, why is that?
[Laughs]… There are three of us in the group and it’s our third album, so we thought it was a perfect name choice.

How would you describe the vibe of the album?
We think it’s quite a creative up-tempo project as there’s a bit of everything from pop, urban and dance for everyone.

There were rumours suggesting that you are angry with former X Factor winner Shayne Ward, who apparently stole on of your songs? What exactly happened?
It was a joke. Basically, we were working with Ryan Tedder over in Los Angeles, a few years back, and we did a song together Shayne had asked if he could use the record, and we of course said yes. He told us that he wasn’t going to release the song as a single, but instead it was going to be used as an album track. We started making plans to use it as a single for ourselves then the next thing we heard was Simon Cowell, talking about the possibility of releasing it. Even so, at the end of the day we would have allowed him to release it as he would have sold a lot more copies than us.

You girls are looking amazing! How do you stay in shape with such a busy lifestyle?
[Laughs]… Well, we dance and perform all the time so that pretty much keeps us in shape. We are also quite active doing different things from running, horse riding and kickboxing.

And finally, we would like to find out which of the following male celebrities you girls would snog, marry, date or avoid: Tinie Tempa, Prince Charles, Wagner and Olly Murs.
Snog: Prince Charles
Marry: [Laughs]… Tinie Tempah.
Date: He’s a bit short, but we wouldn’t mind dating Olly.
Avoid: Err, Wagner

‘Stilettos’ is out now. Sirens brand new album ‘3’ will be released on 28 March.

For more info check out www.sirensofficial.com