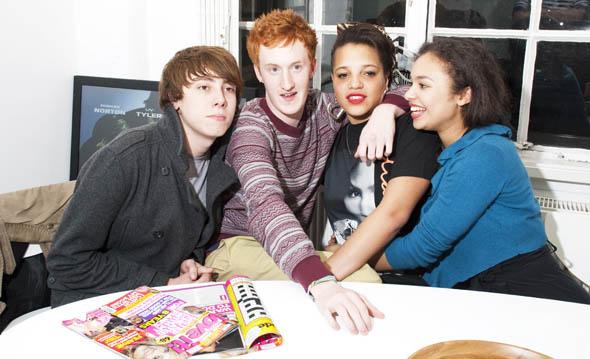 Plucked from obscurity, the stars of E4’s Skins Series 5 are handling fame pretty well. There seems to be hardly any difference between their real-life selves and their on-screen counterparts – apart from Alexander Arnold, who looks nothing like long-haired metalhead Rich.

It’s a pretty brave thing that these five young actors have done, stepping into the shoes of their very popular predecessors; it’s not easy. Audiences can be harsh, especially with shows like Skins, which have such a cult following. ‘Yeah, I was a bit nervous,’ admits Alexander, ‘but I had faith in the characters and the whole creative team; we all did.’

Laya Lewis, who plays party girl Liv, agrees, ‘At first it felt like we had some really big shoes to fill, but with the new cast it feels like a fresh show.’ And she’s not wrong, it’s been a blast!

There’s a real feel-good factor about the third generation. Most of them won their places through open auditions, and they work pretty hard off-screen too. Will Merrick (Alo) is in the Upper Sixth taking English, History and Theatre Studies.

Fun-loving and full of energy, there is no doubt the four are having the time of their lives, but away from it all it’s easy to forget, says Jessica Sula (Grace). ‘I’ll get a call from Rich (the manager) saying I’ve got to go to a photo shoot and I’m like, what? Oh yeah.’ It’s good to hear that the success hasn’t gone to their heads just yet. ‘We all keep each other grounded,’ adds Laya. ‘It’s just like hanging out with your mates.’

New generation
Skins Series 5 has brought us eight individual teenage characters: Rich, Alo, Liv, Grace, Matty, Nick, Franky and Mini. They’re all very different but with a few things in common too – mainly their love of drink and drugs.

But there is a lightheartedness that these guys bring to the show and it comes over in real life too. The room where we are doing the interview is filled with laughter and banter – the atmosphere is infectious and you can’t help but join in and have fun. Not even the prospect of a waiting taxi and impatient press can stop this lot from having a laugh.

You really do get a sense of the closeness that they have from spending the whole summer filming. ‘Not a bad summer job,’ says Will matter-of-factly. But with Skins being the controversial programme that it is, you have to wonder about mum and dad… They all agree that family and friends are pretty supportive. ‘My parents were really proud,’ says Rich. ‘They had watched the show so knew what it was about and that it was risqué. I was 12 or 13 at the time so wasn’t allowed to watch.’ Support for the show and the characters continues to grow, despite some fears that the audience may not like change. ‘I thought it would have taken until about halfway through for people to start warming to us, but it started pretty much straightaway,’ confirms Laya.

This is an experience none of these young actors will ever forget, but what about life after Skins? What happens then? It’s great while it lasts, but the inevitable will happen… a new generation will arrive. ‘I haven’t thought about what I’ll do after this,’ says Alexander. Like his character he seems to be living for the moment, a quality he admires.

Will, Alexander, Laya and Jessica all have something different to bring to the table. All are talented and have the potential to do well, and if shows like Skins can give them the platform they need, then who’s to say a little cast change here and there’s such a bad thing?

But the pressure to push the boundaries is always present – you have to go that step further to keep the audience on the edge of their seats. The question is, what could possibly happen next?

The next best thing?
It would seem Skins is not the only series to favour a change of cast. Other well-known shows, such as 90210, Melrose Place, even Hollyoaks have used the very same tactic…

90210: Back in the 90s it was all about Beverley Hills 90210, but after 10 years on air it had run its course. Fast-forward a few years and it’s back, minus the ‘Beverley Hills’ in the title, but full of it in the show. But is it as good? With some familiar faces on screen, most fans are happy.

Melrose Place: From 1992-1999, Melrose Place graced our screens, but died out in the Sunset Beach era. A decade after its departure, it returned in 2009, mixing a few old faces with a brand new cast. Fans of old aren’t convinced it will last, but new fans seem to love it.

Hollyoaks: More recently, and on this side of the pond, Hollyoaks has had a bit of a shake-up, getting rid of certain characters and bringing in new ones – but did the audience like it? With rumours of the show being axed, maybe not – but here at Flavour we love the show!