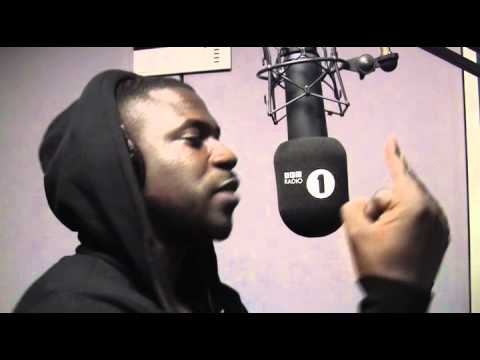 He’s the most content rapper out on the UK music scene, whether a good day or a bad day, he will always be Smiler. The 25 year old, also known as Joseph to his mother, is one of the very few to hail from South East London. Rolling from the streets of Woolwich, he has had the word ‘Enza’ at the tip of our tongues. With two mixtapes, a collection of features and currently hard at it with work on his album, Smiler has plenty of reasons to smile about. Not forgetting his high profile followers of Nas and Kelly Rowland. We caught up with Smiler whilst he took a break from the studio where he spoke about his enthusiasm for UK music, working with chart toppers Tinie Tempah and Roll Deep, and how he took inspiration from one of the biggest diva’s, Dame Shirley Bassey. Not to mention, an official definition of ‘Enza’ from the main man himself.

Tell us a bit about Smiler and how you kicked off your career in music?
I kicked off my career in music after going through a phase of listening to a lot of other artists, especially American artists because the UK scene wasn’t developed at the time. I went through a west coast phase, listening to Tupac, Snoop Dogg, then I was listening to east coast artists. I had such a strong intake of music that I was influenced by that I thought to myself let me pick up a pen and play about, try see if I can put what’s going on with me down on paper. When I went onto college I kept it up with continuous practice, I dare not say perfect yet but I’m just getting better as I go along.

There’s a signature laugh at the beginning of each of your videos – Is that you and is that meant to scare off the haters?
[Laughs] That’s me yeah. It just fitted the animation perfectly. It’s a sinister laugh, obviously the smile is not an obvious happy smile, it’s got a bit of a frown to it. It’s a bit of a deception.

Having been born and raised in South East London – Has it had any influence or effect in your music?
Totally, I’m highly influenced by my surroundings, everything I go through gets documented, it gets put into music. I like to keep it a hundred per cent real. I don’t think I have a stronger influence other than where I grew up and what I’ve been through in my life.

How is your music different to other mc/rappers on the UK music scene?
To be honest with you, I think that personally, my flow separates me from other artists. A lot of people sound similar to each other. Giggs is the founder of that flow, a lot of people tried to emulate what he done, but no one quite does it like him so in that sense he’s got that lane locked. My influences are different, I’m more flow based. What also separates me is my vocabulary and my diction, I feel like I’m pretty clear, not trying to blow my own trumpet or anything!

Nas and Kelly Rowland have both given you positive recognition as an artist – How does it feel to have big names like these crediting you and which other artists would you like to hear have bigged you up?
It’s amazing. These are people I’ve grown up listening to, there is no better feeling than to get acknowledgement from not even your peers, these are idols! I’m a big fan of Jay-Z, Drake and Rick Ross, so if they was to call my name out, it would mean a lot to me.

You’ve worked with chart toppers Tinie Tempah and Roll Deep – How was that and seeing their chart success, does it motivate you even more to get to the top?
Totally, to be honest with you, they’ve both been around for a long time, as have I. But at the time I worked with them, shortly after they went on to do massive things. Tinie’s pretty close to home, we know each other well, it was a pretty organic situation. With Roll Deep, I worked with Wiley and Manga. The situation with Wiley came about after he heard ‘Enza’ and started tweeting and talking about me, so we reached out to each other and he jumped on a remix. Wiley’s a bit of character, but ultimately he’s interesting, whether people love him or hate him they talk about him, so he’s definitely doing something right.

Tell us a bit about your latest mixtape ‘Clarity’ and is there a track off there that you favourite?
Clarity is collectively a good body of work, personal favourites of mine is ‘Knowing When’ and ‘Live for Now’ which is pretty personal to me. But ‘Enza’ has got to be the one. ‘Enza’ was never planned to be a single. I knew it was strong and I knew I wanted to shoot a visual for it and get it out there, however when it was released on January 1, 2010, and it received 11,000 downloads, I thought let’s do the video.

‘Enza’ has been your biggest hit to date, but can you give us a definition of what ‘Enza’ really means?
Enza is like an indescribable sensation, it’s a euphoria, an x factor, something atmospheric. Enza is energy, something you can’t put your finger on or describe, but you can feel or experience it no matter what it is, whether it’s visual or auditory. ‘Enza’ has actually reached the Urban Dictionary, because of my definition, so that’s massive! (I actually checked the urban dictionary for myself and ‘Enza’ really is on the database)

What are your key requirements whilst writing?
I don’t like my space being invaded because it compromises my creativity. I can write wherever I am but if I’m sitting in a room with ten people and there’s lots of conversation going on then it messes with me. Sometimes I pour a little shot of something and just let my mind travel, I could be driving and I just come up with the craziest idea.

You’ve sampled Shirley Bassey’s ‘Big Spender’ on your latest single ‘Spender’ – How did that idea come about?
This was about a year ago, myself and my manager were in a club called Merah and we was just talking about the success of ‘Enza’. And as ‘Big Spender’ came on, my manager came up with the idea to sample it on a track. So we planned it out there and then in the club.

UK or Stateside – Which of the two music scenes is doing the most at this present time?
I would a hundred and twenty million per cent say the UK, and the reason why is because, even though we haven’t achieved as much as the US, they’ve got 52 states and each state is as probably as big as the UK. However, the speed at which were growing is exciting and I wouldn’t want to be anywhere else.