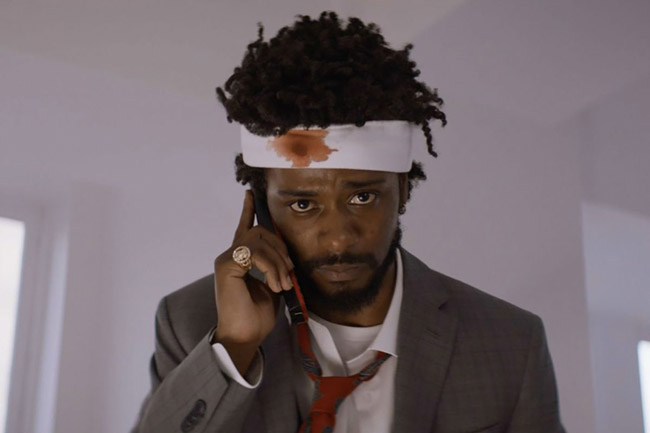 Just five months after the US release of Boot’s Riley’s brash anti-capitalist Sorry To Bother You it has finally arrived in the UK. Due to the weariness from overseas distributors this film has been a long time coming, whatever the reason you wish to believe, once seen, it’s not hard to understand why this completely surreal, marmite movie took so long to bother us and its nothing to do with the race of its main callers but the absurdity its ending spirals into.

The story focuses around Cassius Green, played by a soothing Lakeith Stanfield, renting out his Uncle’s garage as his roof over his head; he struggles to find a job. With both his uncle on his back and aspiring philosophical artist girlfriend, Detroit (Tessa Thompson) giving him the push he needs, he takes a soulless job as at telemarketer at the local call centre.

Struggling to even get his white customers to even listen to his pitch before they hang up, Cassius’s colleague in the next booth down, played by Danny Glover, gives him some advice, to use his ‘white voice’. This instantly propels Cassius to be noticed by the big dogs on the top floor, the home of the ‘Power Callers’. Cassius sells out his colleagues downstairs as they make a stand for better pay and to end their slavery as he heads to the corporate elite upstairs.  Taken under the wing of the sharply dressed Mr…. (Omari Hardwick), a character whose last name we never find out, he becomes the star of the company and gains an unhealthy interest from the visionary CEO Steve Lift (Armie Hammer) who has big plans for the future and big twisty, yet life-altering plan for Cassius.

Stanfield gives a great performance as Stanfield, as the world around him erupts in chaos from him crossing the picket line and becoming an instant viral YouTube star after being struck on the head by a protestor to the unfolding insanity of the world he has found himself in amongst the mainly white corporate elite, he exudes a calmness where many others would run screaming. Unfortunately, we do not get to experience a ‘White Voice’ impression from the rising star. Instead, a number of white actors are drafted in to provide the voices including Patton Oswalt for Hardwick’s Mr and even Tessa Thompson’s Detroit gets her dubbed moment with Lily James stepping in.

Riley has a sharp sense of wit which levitates the audience out of the pit of surrealism that jumps quite rapidly in the second half from refreshingly original to terrifyingly insane. Despite his very public takedown of filmmaker Spike Lee over the ‘watering down’ of BlackKklansman, its plain to see Riley’s style has been very heavily influenced by the groundbreaking director. Cleverly, whilst Cassius is making his sales pitch to the white customers on the other end of the phone, he lifts Cassius, desk and all, out of the call centre and drops him directly their home.  Each camera shot, image, colour palette and plot development screams of a new age, contemporary Lee.

Your either going to love this or hate it, there simply is no compromised middle ground with this completely unhinged, ethereal take on corporate manipulation and slavery, class prejudices and racial perceptions.