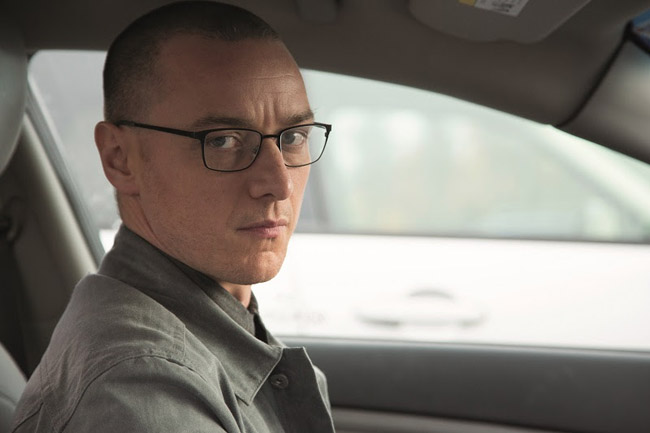 It’s been a while since M Night Shyamalan has delivered anything as good The Sixth Sense, with each new film we sit and wait with bated breath to only be let down like plummeting off the top of the tallest skyscraper.

Then finally 2017 arrives and with it Split, surely with James McAvoy taking the lead we have finally something worth spending our money on?

Split ultimately comes in three parts which are cleverly melted together like molten cheese; we have the kidnap of the three girls – which places Casey (Anya Taylor-Joy) at a party amongst girls who pity her as she’s a bit of a social outcast. Casey just happens to be in the wrong place at the wrong time as the girls are knocked out and dumped in a dungeon bunker somewhere by one of McAvoy’s many personalities as he prepares them for some kind of ritual. As with any predictable thrillers, our three captives (Haley Lu-Richardson and Jessica Sula) try to escape the clutches of this confusing, multi-personality mad man – whose illness is described as dissociative identity disorder – lead by a ballsy Casey. Worryingly Casey doesn’t seem all that phased by the unfolding madness that surrounds her.

McAvoy is a revelation as he brings 8 of his 23 personalities to life, playing each with diverse precision, whilst always maintaining that element of humour and chilling menace as he jumps, with a slight change in costume, from the playful Kanye West loving child persona of Hedwig, a camp Fashion Designer called Barry to the more sinister side of his personalities with Dennis – a creepy guy who likes to watch girls dance to the militant Patricia. Cleverly part 2 has Barry visit his therapist, Dr Fletcher (Betty Buckley), always edgy and hiding his deep dark secret, each visit sees Dr Fletcher become increasingly worried about his ever emerging anxiety and state of mind as she tries to get to the bottom of his late night emails to her.

The third and final piece of the puzzle comes with Casey and her random flashbacks of her early childhood with her Father and Uncle featuring heavily. It’s these flashbacks that build on Casey’s character and explains to us exactly why her manner of a cold, nonsense and logical young women has come to fruition. It’s this, along with the removal of many layers of tops, that reveal her secret which sees Casey and Mr multi-personality kind of have a mutual understanding – a slight bond is the best way to describe it.

Shyamalan’s reputation comes from his use of the unpredictable twists he laden’s his theatrical creations with but this is one film in which it never materialises. Don’t tax your brain over what the twist may be as you’ll just yourself a headache over thinking the storyline to only feel an almighty disappointment. Some may argue the point that the final scenes of Split is where the twist lays, I beg to differ this is more of a surprise and makes everything you have just witnessed worthwhile, maybe to even rethink but certainly be intrigued enough to hope we see more in the future.

Split is out in cinemas January 20th.