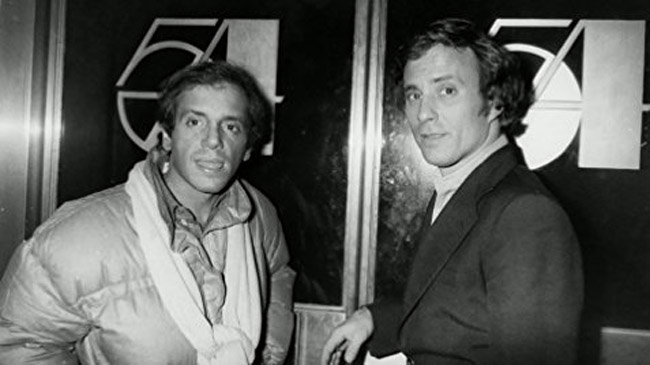 In the late seventies, amongst the Manhattan elite comprising of mostly celebrities, the number one nightclub to be associated with was Studio 54. At its height, the hedonistic disco inferno was the place to be. Even to this day, those that were lucky enough to be let through the front doors of a former CBS TV Studio, dreamily cloud over in the excess of their memories of a venue that allowed them their freedom. Matt Tyrnauer’s documentary sets its focus on the rise and fall of the nightspot and the men behind its notoriety.

Tyrnauer doesn’t need to be as elaborate as the nightclub was to bring to life and transport its audience back to the clubs heyday. Keeping the format simple, with just a handful of guest interviewees; the filmmaker makes clever usage of archival footage like news segments and interviews, photographs and narration. In front of the camera, of the trio who founded the club, Ian Schrager reminisces over the club, despite its infamy, merely had a lifespan of three years.

Interviewed alongside the club’s silent partner Jack Dushey; Schrager goes into detail into how he met his Brooklyn native friend Steve Rubell – who passed away from HIV back in 1989 – at college sealing their lifelong friendship and ambition. With the pair wanting to make a name for themselves amongst the nightlife business’ they set to work on their research into how to create THE ideal club that everyone wanted to be at. We get a glimpse into how disco was integral to exploring a diverse kind of high; establishing the foundation of a connection or even wanting from the audience that we could still attend the iconic venue.

But what made this club so unique? So unique that anyone that was anyone, from actors to musicians to models found themselves drawn. Thanks to the fantastic work of publicists hired to promote the club in the media; its selling point, was behind those doors you were free to do whatever you wanted including both sex and copious amounts of drugs in privacy. However, there was consistently a photographer or video crew roaming amongst the dance floor to capture a picture or two which would end up in the press. At one stage, during an interview with the flamboyant Rubell, a young Michael Jackson enters the room to give his own account of why he loved the cub so much.

Despite the clubs over the top staging and the world watching its hedonistic ambience; Studio 54 never had a liqueur licence, and for Rubell, Schrager and Dushey this is where their downfall began. Once the party stops on screen for the audience, events get pretty serious. The liqueur licence represents hardly a dip in their troubles; they worked around this obstacle by setting up a catering company. The nail in the coffin came with a Tax evasion lawsuit when the men were caught red-handed skimming large amounts of money from the till, as well Rubell’s tendency to supply drugs to many of his notable partygoers.

As the fascinating and brawny documentary nears to a close and the men’s battles with law enforcement, both Rubell and Schrager appear ruthlessly fearless as they were sent to prison for their misdemeanours; even the stay behind bars didn’t keep the pair from plotting their next moves. In the present day interview with Schrager, Tyrnauer seems to effortlessly praise out almost frank and sincere testimonies with a starry-eyed glee.

Tyrnauer’s Studio 54, just like its subject, embodies the hedonistic voice of the essential and legendary club; an end of a definitive era that strips bare the sugar coating with forthright honesty and absolutely no shame. After all, it did redefine club culture to become what it is today.