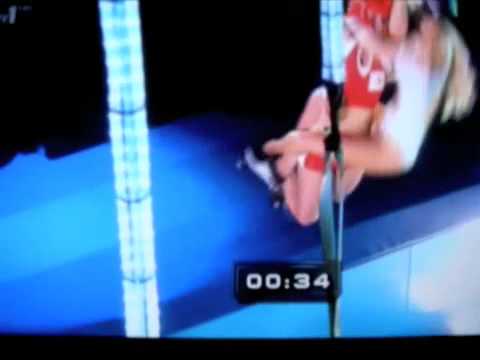 On Sky One’s TV show Gladiators Amy Guy aka Siren is described as ‘The goddess of perilous seduction, expect no mercy. She will entice any contender into the waters and show how dangerous she can be.’ With her blonde hair and angelic face ‘dangerous’ is the last word you would associate with the star from North Wales. Now she is preparing for her next challenge as the 25-year-old 5 foot 9 beauty is up against Katie Price in the Celebrity Arena Polo match at the British Open Show Jumping Championships 2009. Here she tells Flavour how her training’s going on the run up to the big event.

What has been the easiest/most difficult aspect in your training?
Well the horse riding part hasn’t been too difficult, I’ve been out of the saddle for a few years but its like riding a bicycle……once you have learnt it just comes straight back to you. I began riding when I was about three years old so I think I could ride before I could even run! The most difficult part is co-ordinating the stick. Most people think that if you can ride you can obviously play polo, but that’s like comparing a sprinter to a hockey player I guess. Its takes a while to master the hand ball and eye as one, as well as controlling an animal beneath you.

The level of fitness required for Gladiators must have stood you in good stead for your Polo training?
With gladiators the trick to most of the games, is natural reaction timing, mixed with balance and obviously speed and strength. You have to quickly assess situation and react – which is exactly what you have to do with polo. Balance and core strength are vital when horse riding and take many years to develop. Having a strong core in gladiators really helps as it allows smaller framed gladiators like myself maximize our strength and power against our contenders.

What would your advice be to people wanting to have a go at Polo for the first time?
This depends on whether you are a rider or not. If you are completely new to the sport – the first piece of advice would be ‘Don’t be afraid of the horse’. Learn to walk before you run, and be at ease on the horse back before you try anything to elaborate. If you are already a horse rider – just jump on and give it a go! Its one of the only forms of equestrianism that a team actually play in the arena at the same time. There is a real sense of team sportsmanship while playing and polo is a great social sport. What equestrian discipline would you next like to try your hand at?
I’ve tried and competed in most from show jumping, cross country, pentathlon, mounted games, jousting and now polo. I used to enjoy watching ‘horse-ball’ which is a combination of polo and rugby I guess, where instead of using a polo stick you have reach down to the ground from the horse and pick up the ball ( size of a football with leather grips on) and then throw it to one of your team members. Its a very competitive and athletic type of equestrianism and is quite dangerous as a lot of contact takes place.

Do you think Polo is trying to shake off its elitist image and encourage more people to get involved?
I think in recent years this is happening in all aspects of equestrianism not just polo. I think that many people used to have the opinion that riding was only for the rich and wealthy. If you choose and have the ability to play/compete at the highest level then as with any sport it will take up a lot of your time and will of course cost you money. But people can participate in polo and other forms of equestrianism at all levels. There are many polo clinics and farms across the country that allow you to turn up and borrow a horse and all the equipment necessary for you to play. Chukkas are held throughout the week so you can team up with some of your friends and all turn up together and have a game. You don’t expect people to have their own swimming pool to learn to swim do you… it’s just the same with riding.

You have played Outdoor and Arena Polo, how do the two compare?
I have only really played arena polo as my polo teaching has been through the winter season. I can only image that the more room you have to play the better the game will be. I’m a speed junkie and love to feel the wind in on my face, so outdoor polo is something I’m defiantly looking forward to this summer.

Are there any other features or classes at the Show that you are particularly looking forward to watching whilst you are here?
I’ve recently started show jumping again, as I hope to compete in the Modern Pentathlon later this year. I’ve been training down in Essex with Daniel Neilson, who is one of the top young riders on the show jumping circuit at the moment, so I will be watching all of the jumping classes throughout the show to pick up some tips and to cheer him on. The British Open Championship will be amazing after watching the riders competing and trying to gain a place over the previous three days.

Do you have an equestrian hero who has inspired you?
I would say I didn’t have a hero, I have always believed that if you have an idol or hero that you aspire to be like, you are destined for disappointment as you will always compare your success to theirs. I prefer to set myself achievable goals that I push myself into reaching.

You are clearly very sporty and relish competing, what do you do to unwind after a tough competition?
I think one of the most important things about being a sports person or athlete is having the ability to know how to wind down as its very important to your training and future performances. Anything that involves taking your mind of things like eating out, watching a good comedy film or taking the dog for a walk, all take my mind of competing. I always have a busy schedule mixing all the parts of my career around so one tends to takes my mind of another.

What is your most memorable sporting moment?
I have so many moments that are special and bring back flooding memories from the athletics, horse riding, winning miss world sports & fitness and now to gladiators. But if I had to choose one it would probably be winning a class at Pony of the Year Show when I was competing on 148cms. Looking at my list of sporting achievements it probably doesn’t sound like such an monumental occasion, but for some reason I was overwhelmed with my win. I can still feel the gush of anxiety that came over me when I entered the ring…..I was the last person to jump and I could not take the smile form my face when I looked the clock after landing over the last jump.

Who do you think will win the British Open Championships this year?
Ellen Whitaker is the only female in the line up at the moment, so I’m hoping that she can take the title for the girls! But like always it’s going to be a close call and very exciting watch.

Amy Guy will be competing against Katie Price in the British Open Celebrity Arena Polo match on Sunday 19th April. Both celebrities will play alongside two top polo professionals and compete in front of thousands of spectators. Tickets are still available for the British Open Show Jumping Championships (16th – 19h April at Birmingham’s NEC). Visit www.britishopenshowjumping.com for more information and to book or call the NEC Box Office on 0844 581 1301.