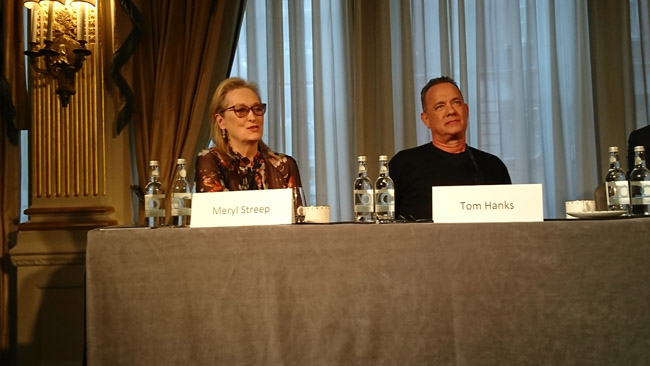 This week Hollywood Royalty, Meryl Streep, Tom Hanks and Steven Spielberg, descended on London on a press tour of their latest film The Post. A timely retelling of the Washington Post’s decision to run an expose on the secrets of the US government and a turning point in history for women in journalism.

The Post is the first time Streep, Hanks and Spielberg have collaborated on a film and what an important story it is. Steven Spielberg directs Meryl Streep and Tom Hanks in the film, a thrilling drama about the unlikely partnership of Katharine Graham (Streep), the first female publisher of The Washington Post, and its driven editor Ben Bradlee (Hanks), as they race to catch up with The New York Times to expose a massive cover-up of government secrets that spanned three decades and four U.S. Presidents. The two must overcome their differences as they risk their careers—and their very freedom—to bring long-buried truths to light. We attended the press conference — which was dominated by the conversation of women and in particular women within the industry, — in which filmmaker Spielberg along with Tom Hanks and Meryl Streep in attendance. The film may be set in the Nixon era but the issues raised are still timely in 2018 under the US’s current administration but Spielberg raised the fact that this doesn’t just apply to one administration, whilst also making it clear his story was importantly crucial to tell the story of the first lady of power in journalism.

“I think the issues are bigger than one administration. Had the election gone a different way I would have still found the urge to tell this story? The first thing that attracted me to The Post was Kathy Graham [publisher of the Washington Post], it was her story. It was her evolution as a real person.A real potential power that did not have the facility to exercise that power because she hadn’t quite found her centre of gravity. She hadn’t been able to find how to use her own voice. That’s something that has been talked about and written about. I knew that about Kathy Graham. So the obvious comparisons in 2018 and 1971, it was the Kathy Graham story and then eventually the Ben Bradlee/Kathy Graham relationship that would have made a good movie, whether it had been in the last election cycle gone differently or anytime.” As a strong advocate for women, Streep revealed that her attraction to the role of Katherine Graham fell down to two factor’s, her determination to hold the line for freedom of the press and to play the figurehead for the transitional moment in history for women in journalism.

“What I thought was interesting about the screenplay was that it fell to a woman to hold the line for press freedom at a time when women were excluded from any kind of leadership role in the press. There were no women reporters; it was very unusual. Our Friend Nora Ephron (who this film is dedicated), graduated from Wellesley, ran the paper there, went to Newsweek to interview to be a reporter.At that time Katherine Graham owned Newsweek, and the interviewer told her she was very welcome, she was a brilliant woman. She was very welcome to be a researcher, a copy girl or a secretary but reporters were men. I look round this room, and I see many many women, and you would not be here in 1971, so it was a different world. So for this crucial, decision to hold the line, and to risk everything, to have that fall to a woman, who was all alone in her position, that’s what interested me. Both, holding the line for press freedom and the fact that it was a transitional moment for women.” Whilst the conversation was still very much dominated by women in the industry, Tom Hanks weighed in with his own ideas about the current climate the industry is facing showing he is also an advocate for more diversity and women to be placed in positions of power.

“I think you have to divide the industry into two very distinct categories. Television kicks movies ass when it comes down to diversity in the workplace. Both by way of skin colour, racial background as well as the number of women that work in it. In Television, in which it is better than it has ever been, because of the advent of ten-part series, series that play themselves out. Women are much better represented in that medium than they are in motion pictures. The economics of movies, I think, have been determined by the men who make the decisions. Who think we need to have essentially boys and guys and Dads decide who is going off to pay the twenty dollars per ticket. I’ve worked with women more often…

Penny Marshall, I’ve made multiple movies with her, there was never any question of who was the boss. Nora Ephron, my family have worked with her three or four times, no question of who’s the boss there. I’ve worked with women executives and women screenwriters. I’m very much part of the generation who didn’t really give a shit of the gender (pardon my language) , of who was in charge. The person in charge is the person in charge. What was going to come about, I think, because of this great Rubicon that has been crossed, is in those boardrooms and in that decision-making process, in the people who sign cheques. It’s not just the financial, it’s the storytelling aspect of it, and you are going to see a different proportion between then and now. I think more women are going to be awarded their positions based on their merits, the quality of their work. For a while, why not just make it literally, make it specific. There is no reason not to say we need more women on this board, we need more women running these departments, and we need more women in our company and the decision-making process so it actually represents the numbers.”

You can listen to the full press conference below


The Post is released in UK cinemas January 19th