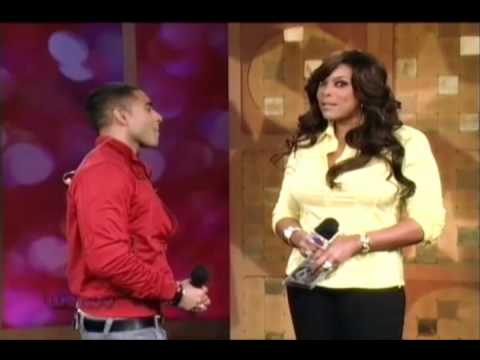 American chat show host Wendy Williams hit London this week and Flavour headed down to the Soho Hotel to find out all about her chat show, which is winging its way to our screens on BET this summer.

For those who don’t know (and ya really should), Wendy is a notorious DJ/ presenter/ best selling author who loves digging the dirt on celebs, asking them awkward questions and giving us celeb hungry viewers all the juice from the comfort of her studio couch straight to ours at home.

Drugs, divorce, sex and surgery- nothing is off limits. Never far from gossip columns herself, Williams famously alluded to rumours that the late rapper Tupac was raped in prison. She also faced sexual harassment charges in 2008 when a former employee claimed Williams and her husband(who is her manager) subjected her to sexual harassment- namely Wendy’s hubby propositioned the girl while Williams did nothing to stop it and encouraged the employee to dress like a “sexy little bitch” per her husbands request.

She’s not afraid to court controversy which is why viewers tune in, in their millions stateside. And heavy hitters can’t seem to stay away from her either. Heidi Montag and Whitney Houston have both graced Williams couch, laying themselves prey to her deviously divalicious questioning style. “Basically I read all the glossies like you guys and get to ask them all the things you wanna know!” Wendy told us exclusively. Love it. She’s doing the hard work for us!

And although her show is filmed in New York, she loves to get us Brits on her couch. Jay Sean, Jamie Oliver and Graham Norton are just a couple of the big British names that have appeared. “I would love to get Jordan on the show to” she confessed, while adding “I love England. I’m crazy about the words you use like ‘wag’ and ‘hen party’. Oh and I’m heading to Brixton to check out the wig shops!” Yes ladies, Wendy is not afraid to keep it real and admit that she uses lace front wig, oh and she’s pretty open about the fact that she has gone under the knife for a bit of a nip/ tuck (unlike some of her interviewee’s).