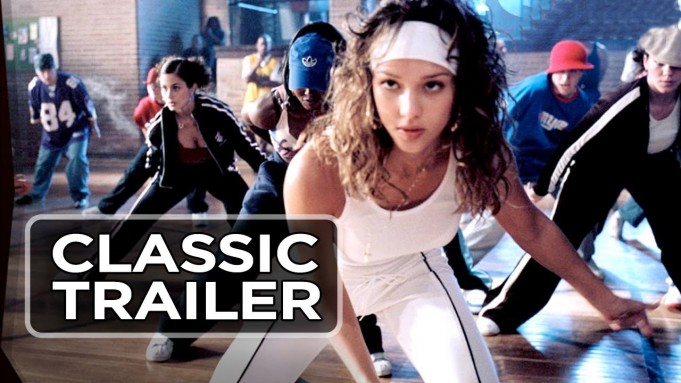 When I was asked to put together the Top 10 Greatest Dance Films of all time, it wouldn’t have surprised me if passers- by hadn’t witnessed a glint in my eye.

As someone who devoted their weekends to tearing up the dance floor as a teenager and presently attends a ‘sweat in your eye’ Dance Hall class, I believed I was the girl for this job. So I’ve put together a list of the Top 10 Dance Films beginning from the 1960’s up until the noughties and to be honest choosing the line- up wasn’t the hard part, the difficult bit was choosing the order of greatness so instead I bring you a timeline of dance film genius.


This one sticks out a bit like a sore thumb with its psychological undertones. It’s a film about a ballerina who is out to clinch the lead in a production, she gets it but the arrival of a new and less uptight lead star unbalances Nina, to which she starts to see things that aren’t there… she begins to see her double and thinks she’s turning into an actual bird; definitely a bit cuckoo!

I loved the first two Step Ups but there was something a bit different this time as 3D cinema became a huge hit across cinema land. We meet some new dancers in the third instalment, there’s a talented guy that promises his dad he will not dance anymore, instead pursue a career in engineering (as if he’s going to quit,) but along the way he meets a hot girl who he brings into his swag- tastic dance studio/ house to train for a battle that is legendary. We soon find out that the girl is the sister of a rival dancer taking part in the battle and as much as he likes her, he can no longer trust her. What a she- devil we think until she tells her brother where to go and gives her alliance to this misfit dance crew.

We follow a group of successful candidates as they progress from audition right up to and through a prestigious Performing Arts School. We meet the talented Queen bee that nobody cares for, the timid pianist that has a voice hiding inside her, jaw- dropping dancers and a timid actress that nearly gets taken advantage of on the casting couch. Although at times very predictable, the talent and passion that these actors portrayed was real.

A guy from the bad side of town and dancer from a great Performing Arts School are thrown together when he is sent there to complete community service. The chemistry is apparent from the get go as Nora watches Tyler breakdancing outside and he messes with her when he next sees her. She doesn’t want to see the good in him until her dance partner gets injured and he steps in as a complete contemporary novice. As they spend time practicing together she sees that there’s more to this would have you believe bad boy. Check out our Step Up ultimate playlist here

Jessica Alba in Honey is trying to save the local centre that she teaches at, at the same time working as a bartender and attempting to live her dream of becoming a backing dancer by attending auditions. It seems she can’t catch a break until she is filmed dancing at her local nightclub and propelled into a world of the music industries finest. Things are happening and Honey decides to get a loan to open her own dance studio but along the way the local centre is struggling and her dance dreams are fraying relationships. The only thing she can do to out things right is to hold a dance benefit, getting the community to see that the centre is worth fighting for.

Trying to fit in at a new school having just lost her mother in an accident, she blames herself for her mother’s death as she learns the news at a dance audition. Trying her best to forget her dancing past she throws herself into school life and as much as she’s given up on dance, dance hasn’t given up on her and as her new friend’s brother introduces her to hip hip clubs, he gives her the edge she needs to audition once more for a place at a prestigious Performing Arts School.

Following the gruelling life at a Ballet School, we see the struggles of a group of dancers and friends. There’s a girl who is a complete bitch (there’s always one) and she puts people down but deep down she’s hiding a guilty secret. Two guys fight for a girls attention as she tries to up her game after finding training difficult, being told her technique is all wrong but when she bumps into one of the guys that lust for her she gets a new leash of life… whilst dancing to a Jamiroquai soundtrack, who knew Ballet could be so funky?

A guy and a girl hook up over the summer holidays, he’s charming and sensitive, and she is sweet and innocent. Fast forward a few weeks to when Sandy starts at a new school and low and behold her summer romance goes there too; we see Danny playing the tool to all his friends as Sandy can’t quite believe the boy she thought she knew. It seems the only way for her to catch Danny’s eye is to vamp up her image and show him what he’s missing; a dance and a car race later, Sandy finally gets her man at the school funfair. Note to reader, please don’t think the only way to get a man is to completely change who you are!

The closest you’ll get to Westside Story these days is High School Musical and I’m not afraid to say I actually quite enjoyed the HSM experience, or maybe it’s just that I heart Zac Efron, who cares,more to the point Westside Story follows the ‘can’t be love’ between one group that includes an over protective brother, plus the rival group that has a member that wants a bit of the rivals sister (confusing I know) but after plenty of clicking and tonnes of salsa it all ends in disaster when one of the boy gets stabbed along this journey to be together.