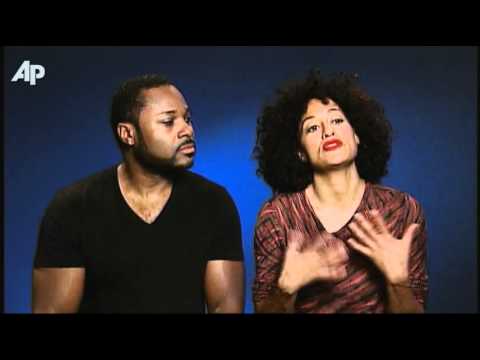 As a small group of selected journalists gather in London’s swanky May Fair hotel, we are all noticeably a little bit nervous. Being asked to interview a former model, fashion magazine editor and successful actress, who also happens to be the daughter of a Ms. Diana Ross, can be slightly intimidating. Diana Ross is without a doubt one of the world’s most iconic women and also the epitome of the word ‘diva’. Don’t get me wrong, diva isn’t a bad thing, but diva can be a scary thing. Diva commands respect and as we wait – as Ms. Ross Jnr is fashionably late – we familiarise ourselves with the incredible bloodline we are soon to be in the presence of and nerves run even higher.

So you can imagine the shock and confusion when Tracee Ellis-Ross enters the room on her own, in a simple trouser suit and no make-up, with a modest little wave and a timid ‘hey everybody’. All smiles, she introduces herself to everybody in turn – including the catering staff – and we all watch on in astonishment.

The more you speak to Tracee, the more you realise the similarities between her and her mother are very few. Apart from the eyes and the signature ‘Ross curl’ it’s hard to draw any further comparisons. However, Tracee is keen to stress that the Diana Ross that you seen on TV and Diana Ross at home, as a mother, are two very different people.

‘My Mother is so full of love. She really is just all love’ Tracee says with such adoration. ‘She was always a mother first and she was also a single mother for most of the time, which a lot of people don’t realise. She always made sure she was at home with us as much as possible and when she was on tour, we were always in constant contact. I can’t fault her at all for the way she raised us’.

What is so captivating about Tracee, other than the fact that she is so personable, is that she also has an amazing sense of humour.  She is nothing like the scary diva associated with her surname, but instead quite the opposite and it was these very traits that have moulded her career thus far.

‘I think acting sort of called me in. There are two consistent things that have made me joyful since I was a little girl, clothing and making people laugh. As a model, I loved the clothing and loved taking lovely pictures and all that kind of stuff, but I just had way more to say… and I’m so silly [laughs]. They were trying to get me look all sexy and pretty, but I was too busy making jokes. Working in the fashion industry, as a fashion editor, gave me access to all that, but I still felt like I didn’t have enough of a voice. The acting just naturally lent itself to all of who I was… and I still get to play in clothes and do dress-up and style myself [laughs].’

In terms of her style, Tracee has always had a signature and unique look, setting her apart from other celebrities and making her a fashion icon to many.

‘It’s very me… I don’t really dress for anyone but myself. Clothing is one of the ways I express myself creatively. I don’t use a stylist. I sometimes have assistance, because I’m too busy to find the things I need, but I will never give up shopping. I think I came out of the womb shopping, like, ‘I’ll take that one, gimme that in a 10’ [laughs] Some people don’t like it, but that’s up to them.’

Although she has played many roles, Tracee is most renowned for her role as the hopeless in love Joan Clayton in the TV sitcom Girlfriends, which became a world wide phenomenon, with as many male fans as women nationwide. I often wonder with cult classics such as Girlfriends, if the actors are able to envision the show’s potential as soon as they read the script.

‘No, I don’t think I ever look at things that way. I may think ‘wow, this is going to be huge for me’ or ‘wow, I love this role’, but that’s about it. I knew we had something special, because there was a chemistry between the four of us [leading actresses] from the very first moment. It just worked. I also felt very excited about doing a show where there were four, female, black leads. I thought that was an amazing and wonderful thing. Beyond that though, I really have no idea… I am very grateful to know that Girlfriends had such world wide appeal. We didn’t get nominated for Emmys or Golden Globes, or things of that nature, but I don’t think any of that even matters when the show is connecting to the audience in the way that we did with Girlfriends.’

As much as Girlfriends was loved by its followers and cast, there comes a point where you have to let go and I think Tracee above everyone else recognises that. Starring in a new sitcom for BET, called Reed Between the Lines, Tracee explains why her new role was very much a conscious step away from Joan Clayton.

‘The show is about a happily married couple, with a blended family. Malcolm-Jamal Warner plays my husband and I play Dr. Carla Reed who is a therapist. We are both professionals. He is a stay at home NYU English professor, who teaches online and takes care of the kids, while I go out to work.’

‘I think the thing that drew me to the role was the therapist part. I thought it was a very big departure from who Joan was (in Girlfriends). Carla is a very different kind of woman. She is a woman who has a lot of faith and trust and passion, whereas Joan had a lot of fear and neurosis and anxiety. Also the fact that Carla is happily married, again, is a big departure from Joan. I loved the fact that Carla was therapist, that she was married, a mother and the fact that it was the kind of role that I felt ‘had legs’ as we call it in the industry, it could live for a long time. There is a lot to explore with this show and the characters.’

As we are asked to wrap-up by the publicist, Tracee very cheekily allows me to ask one more question. With acting being her sole passion, I ask her who or what would be her ultimate role.

‘I really wanted to play Lena Horn. There was something about her… yes, she had a wonderful voice, but it wasn’t her voice that made her who she was, it was her character. She had an extraordinarily fierce and courageous, bold and comedic soul, so I had a real identification with that. I also love Carmen Miranda. Those are two that I think I would love. Oh, and Coretta Scott-King… [laughs].’

Reed Between the Lines is on every Tuesday and Thursday at 8.30pm on BET Sky Channel 191.